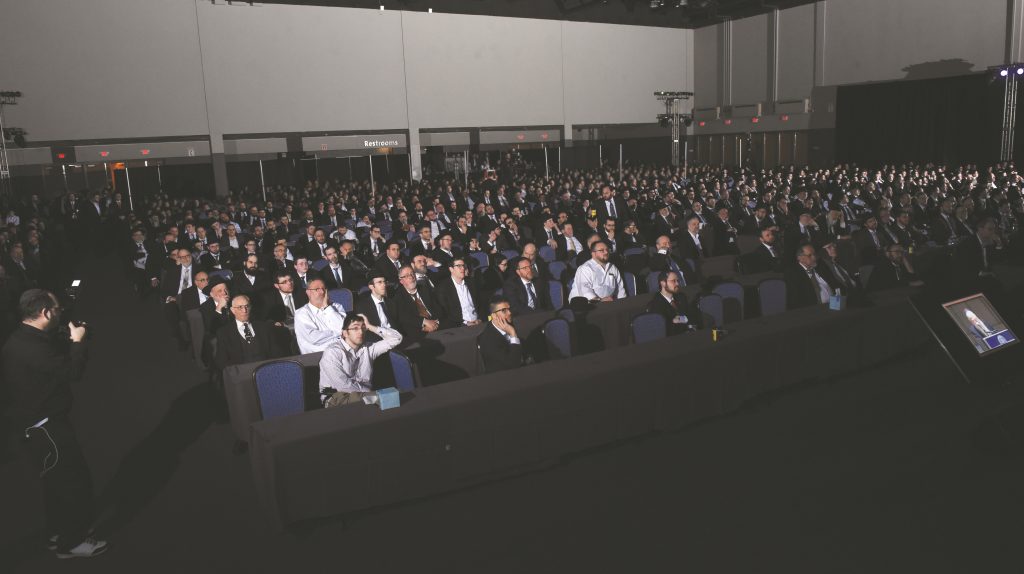 A whirlwind of sessions focused on issues from shidduchim to caring for aged parents, from effective kiruv to combating anti-Semitism, as well as contemporary issues in hilchos ribbis. Drashos from leading Rabbanim and Roshei Yeshivah addressed topics such as achdus and the challenges and opportunities of galus.

It was an opportunity for Jews from Chicago, Cleveland, Detroit, and communities around Midwestern U.S. to gather and discuss issues of mutual relevance, and some that might just be interesting.

At the same time, the convention is a celebration of the success and growth of Orthodox Judaism in the Midwest. The turnout of over 1,000 people filling the tremendous conference rooms and exhibit halls of the cavernous Renaissance Schaumburg Convention Center in a nondescript suburb of Chicago seemed to say more than any speech could about the vibrancy of frum life that creates ever-growing centers in cities throughout the corn belt and well beyond.

Twenty or so feet above the heads of the buzz of participants, lining a long hallway that connects the 16-story hotel building to the convention center, hung banners advertising the steady growth of Midwest communities large and small. Each one was decorated with encouraging demographics ranging from the number of new families that have moved in over the past years, to yeshivos, mikvaos, and in many cases generous private school aid packages offered by state governments.

The guiding theme of the Convention, held in the two days leading up to and on Shabbos Parashas Shemos (Dec. 27-31, 2018), was the somewhat amorphous word “Clarity.” Adapted by various speakers in different contexts, the term is something that is widely striven for and probably found elusive in each generation. The tag line of “Clarity” was aptly accompanied by the sub-heading of words of the passuk, “Atah horeisa ladaas.”

At the plenary keynote event (one of four separate sessions billed as keynotes) on Thursday night focusing on building “solid families and strong homes,” Harav Yisroel Reisman, Rosh Yeshivah, Torah Vodaath, and Mara d’Asra, Agudath Israel of Madison, said that the concept of clarity in one’s family priorities is an indispensable foundation for shalom bayis. Moreover, the dangers of confused priorities have put many a home on a rocky course.

He described a talmid who was struggling with shalom bayis due to his dissatisfaction with his wife’s housekeeping habits or lack thereof. Rav Reisman reminded the young man that when he was dating he had said that he wanted a kallah with tznius and middos tovos, but never mentioned that she also had to be “a good cleaning lady.” Rav Reisman implored the audience to think back to the goals they had for their families when they stood under the chuppah and to continue to draw on them as a source of strength and guidance.

“Too many homes are destroyed over eitzim v’avanim; there has to be a clarity about what’s important,” he said. “Strong homes require clarity. You had it once, now go back to those moments.”

A somber moment of the Thursday night session was a tribute to Reb Mendy Klein, z”l, the legendary Cleveland-based philanthropist who was niftar suddenly this past spring. Over the past decade, there were few individuals who had such a strong and integral hand in the building of Torah in his Midwest community and beyond than Reb Mendy. He was a key supporter of many yeshivos, kollelim, and other fundamental institutions of Jewish life. His having lived a classic rags-to-riches story and his constant focus on the responsibility that accompanies wealth made him a widely admired figure.

Close friend Gary Torgow, chairman of the Detroit-based company Chemical Financial, who worked on many klal projects together with Mr. Klein, spoke of how Reb Mendy never forgot his roots and of the sincere caring that drove his boundless tzedakah and chessed.

“He always said that he was a regular guy with outsized opportunities,” he said. “He put his heart into saving one Jew just like he did into institutions.”

True to the mission of Agudath Israel, a theme of using one’s abilities for the good of the klal under the guidance of daas Torah ran deep through the convention’s many events and took center stage at a Friday morning session entitled, “Finding Your Inner Askan, Community and the Halls of Government.”

Introduced by one of many East Coast visitors, veteran Washington Heights-based askan Rabbi Yitzchok Katzenstein, and addressed by former Illinois Agudah director and present chairman and CEO of the Chicago-based 4S Group, Rabbi Yehiel Kalish, the session focused on the ability of “ordinary” members of the community to make a difference.

Rabbi Yitz Frank, Agudah Ohio director, attempted to give a glimpse of his own advocacy work in state politics, stressing the importance of having communal representatives involved at each step of the legislative process.

“With each budget process there can be 3,000 pages of legislative changes and so much can happen…no one is trying to hurt our community, but you need to be involved in the conversations on a daily basis…As the saying goes, if you’re not at the table, you’re the one on the menu,” he said.

At the Friday night seudas Shabbos, Harav Zev Cohen, Mara d’Asra of Congregation Adas Yeshurun and Rosh Kollel of the Chicago Choshen Mishpat Kollel, said a dvar Torah. Addressing the crowd spread out over the enormous hall used for the dining room tested even the booming and charismatic voice of this seasoned baal darshan.

Never one to shy away from speaking his mind, despite the risk of inviting opposition, Rav Cohen used the opportunity to decry the obsession with ever thicker gashmiyus advertised on the pages of Jewish publications. He noted that upon recent inspections of a popular periodical, which remained nameless, he had found a slew of ads luring readers to spend Pesach at oceanfront resorts. Then he described in vivid detail a photo of a donut dripping with caramel under the banner, “This is how we do Chanukah.” Rav Cohen pleaded with the large crowd to consider the message sent by accepting such ads into our homes and that the public should demand a change in the tenor of advertising geared for the Torah community.

Shabbos morning, the nusach Sephard minyan had the privilege to hear a drashah by Harav Aharon Dovid Goldberg, Rosh Yeshivah, Telshe of Wickliffe, Ohio. He hearkened back to the concept of clarity, emphasized the importance of the regular study of sifrei mussar by baalei batim as well as by yeshivah bachurim and kollel avreichim. Drawing on the example of his own father, “a baal habayis from Chicago,” who would daily spend five minutes learning mussar in his car before beginning his job at a local public school, Rav Goldberg illustrated how such life-changing study can become part of anyone’s routine.

He recalled the example of his Rebbi, Harav Avrohom Chaim Levin, zt”l, the recently departed Rosh Yeshivah of Telshe Chicago whose influence was strongly felt throughout the convention, saying that there was not a day in the Gadol’s life that he had not stopped to contemplate, “Why did I come to this world?”

One of several seudas shelishis options was held specifically for Rabbanim and gabba’im of shuls that have become participants in the Adopt-a-Kollel program, which was addressed by Harav Uren Reich, Rosh Yeshivah, Ohr Zecharia, Woodlake Yeshiva in Lakewood, and Harav Yosef Elefant, Maggid Shiur, Yeshivas Mir, Yerushalayim.

Somewhat unexpectedly, Harav Shumel Yehudah Levin, Rosh Yeshivah, Telshe Chicago, and his brothers also entered the session telling the program’s director, Rabbi Yaakov Bernfeld, that in light of the tremendous warmth and importance that their father (Rav Avrohom Chain Levin) had shown to the endeavor in its early stages, they felt compelled to attend the event.

It was a second welcome surprise for Adopt-a-Kollel over the course of the convention. On Thursday, during a Business Halachah Institute event that preceded the official opening of the Agudah convention, five Midwest corporations signed up to participate in the organization’s corporate sponsorship program. They were following the lead of Chicago businessman Tzvi Reifer, who recently signed up his company to partner with a kollel in Eretz Yisrael.

The same seudas shelishis was also addressed by Harav Zev Smith, Maggid Shiur, Yeshivas Novominsk and Irgun Shiurai Torah, who discussed the Torah imperative to internalize and to react to the needs of others around us. He related a conversation he had had with an elderly Jew who daily had to wait for a bus, sometimes in unpleasant weather. The trip was often difficult for the man and what he found more perturbing was the regular flow of frum drivers who saw him but passed right by, indifferent to how much an offer of a ride would ease his burden.

“I don’t understand,” Rav Smith said, quoting the elderly man. “We live in a generation of heightened sensitivity to bugs and worms in food. How can it be that they see these tiny bugs, but they don’t see me?”

With a sad smile, the man said that he felt he had to employ the statement of Dovid Hamelech in sefer Tehillim, “Ani tolaas velo ish [I am a worm and not a man],” in order to be recognized.

On Motzoei Shabbos, at the convention’s largest event, Dayan Yonason Abraham, Mara d’Asra of Khal Toras Chaim of London and a member of the London Bais Din, praised the work of Rav Avrohom Chaim Levin in not only planting Torah in Chicago, but building a community rooted in submission to Torah authorities.

“It’s one thing to build a yeshivah in a town, but to have a city uplifted by a loyalty to daas Torah is something else. There is a sense of kvod haTorah and the search for true daas Torah; this is something unique to this community and about Midwest Yiddishkeit,” he said.

Once again evoking the theme of a search for clarity in life, the Dayan said that this goal might be closer than we think.

“It’s a confused generation…We all feel we could be perfect if we would be in a different place or time, in Radin or Vilna or back in kollel,” he said. “But there’s a flip side…there are so many wonderful things in our generation, so many opportunities. We are building up to a siyum haShas and there are so many bnei Torah…Our opportunity for kiddush Hashem is here and to look elsewhere is to ignore our mission.”