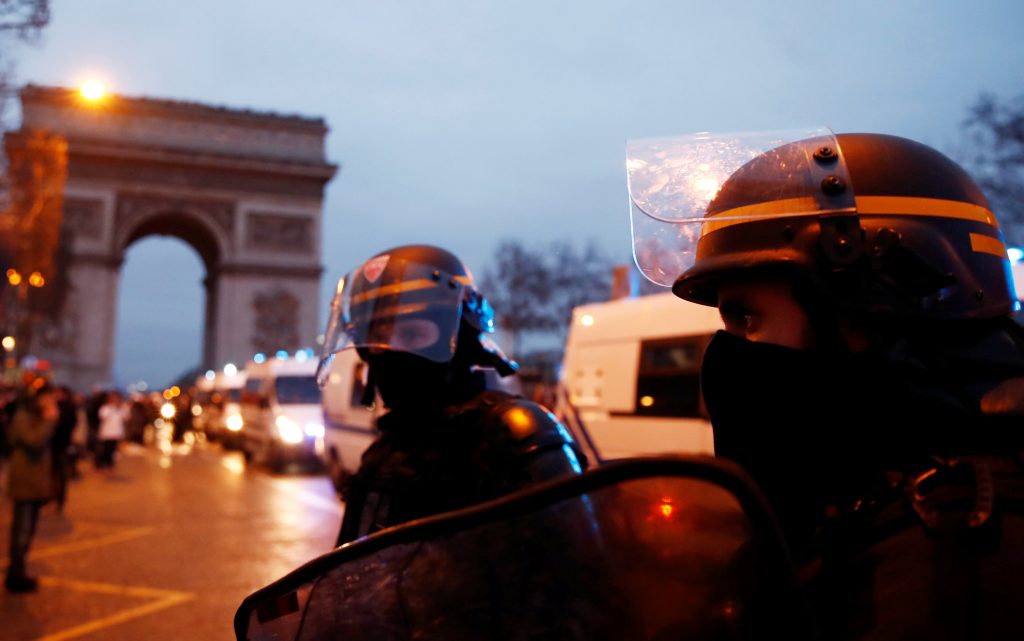 France’s “yellow vest” demonstrators kept numerous roads across the country blocked on Saturday as groups of protesters marched in city centers, but the anti-government backlash was more dispersed and muted than in previous weeks.

Driven by anger over a perceived squeeze on household income, the movement has shaken Emmanuel Macron’s presidency and hurt retailers and other businesses after the spontaneous protest against fuel taxes gave way to riots in early December.

Sporadic clashes with police broke out as protesters in several cities including Bordeaux and Nantes were pushed back by tear gas and stun grenades, though the turnout across France dwindled on the seventh Saturday of demonstrations.

Official estimates were not yet available, though French news channel LCI, citing unnamed sources, put the turnout at 12,000, well below the nearly 40,000 last week.

In Paris, where protests turned violent in early December, police said by early evening that they had detained some 57 people after 800 demonstrators took to the streets, down from at least 109 arrests last week with a similar number of protesters.

People wearing high-visibility vests mingled among shoppers and tourists and chanted “Macron, resign!” on the Champs Elysees avenue, home to boutiques that were smashed and bore the brunt of lootings at the height of the violence.

Major stores, including some that were boarded up on recent weekends, opened their doors.

Other demonstrators converged west of the capital near the headquarters of 24-hour news channel BFM, where scuffles ensued, and several cars were set on fire outside the offices of the Parisien newspaper in the evening, though it was initially unclear who had torched them and whether it was directly linked to the protests.

In Toulouse, where like in Bordeaux crowds exceeded 2,000 people, protesters set bins on fire and some hurled yellow paint at police.

Several highway tolls and motorway slip-roads across France were blocked, operator Vinci said, and traffic on some of the roads leading to Spain was severely backed up.

The protests – 18 months into Macron’s tenure, and his bid to reshape the economy – are expected to rumble on into January despite his attempts to defuse them, including by backtracking on planned fuel tax hikes and signaling wage rises for the poorest workers.

“We will continue until we win, until Macron backs down and gives us what we deserve: more purchasing power, less taxes, a healthy life without having to tighten and tighten and tighten the belt at the end of every single month,” a protester in Nantes who only gave her name as Virginie told Reuters.

Stemming in part from a feeling of disconnect between more provincial and rural areas and an urban elite Macron has come to represent for his critics, the protest has spawned sit-ins at roundabouts and roadsides as people dig their heels in, demanding more measures to help household incomes.

The “yellow vest” protests have been concentrated on Saturdays, after first erupting on Nov. 17 following a campaign spread on social media.