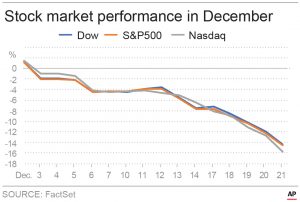 Japan’s benchmark Nikkei 225 Stock Average tumbled 5 percent into a bear market as the global equity rout continued unabated in the last week of the year, with renewed turmoil in Washington rattling investors.

Tuesday’s selloff took its cue from the S&P 500’s worst-ever trading session before Tuesday which was a legal holiday. Shares in China, the other major Asian market open on Tuesday, also declined as investors shrugged off a pledge by the government to do more to support companies.

Investors got mixed signals from Washington heading into the resumption of U.S. stock futures trading at 6 p.m. New York time. President Donald Trump said a partial U.S. government shutdown will continue until funding for a U.S.-Mexico border wall is secure. He expressed confidence in his Treasury secretary and the Federal Reserve even as he again criticized the central bank for raising rates too quickly.

“The Trump bubble, which has brought gains in U.S. stocks and the dollar, is collapsing,” said Mitsushige Akino, an executive officer at Ichiyoshi Asset Management Co. in Tokyo. “The more stocks fall, the more investor sentiment gets worse, so there’s more people who need to sell temporarily, such as stop-loss selling.”

The tumult in Washington added to the troubles of investors, who have seen equities worldwide tumble on concerns about a slowing U.S. economy, the pace of the Fed’s rate hikes and the ongoing trade war. The S&P 500 plunged almost 3 percent to end at a 20-month low on Monday.

Trump, speaking in Washington on Tuesday, sought to portray the decline in stocks as a positive for investors.

“I have great confidence in our companies,” he told reporters. U.S. firms are “the greatest in the world and they’re doing really well. They have record kinds of numbers. So I think it’s a tremendous opportunity to buy. Really a great opportunity to buy.”

Japanese equities are heading for their worst December on record. The Nikkei 225 fell 5 percent to close at 19,155.74 in Tokyo, with all but two members in the red. The blue-chip stock gauge dropped below 20,000 for the first time since September 2017 and closed 21 percent lower than an Oct. 2 high, joining the broader Topix index in a bear market.

“It’s just like panic selling,” said Nobuhiko Kuramochi, head of investment information at Mizuho Securities Co. in Tokyo. “The equity markets are pricing in concerns over a slowdown in the global economy and a downward revision in corporate earnings in advance. Some investors are reducing their exposure to equities in their portfolio” by increasing cash or bonds.

Japan’s benchmark 10-year bond yield slipped to zero percent for the first time since September 2017, while the yen advanced for an eighth day, its longest rising streak since March 2017, as investors sought haven.

Adding to market woes, an emergency margin call was triggered for Japan index futures, according to Japan Securities Clearing Corp.

“Market players on futures need to either reduce their trade volumes or pay emergency margins, which may make it difficult for them to actively trade,” said Hajime Sakai, chief fund manager at Mito Securities Co. Futures contracts on the Nikkei 225 fell below 19,000 as of 3:15 p.m. in Tokyo.

Trump’s latest remarks on the Fed, delivered in front of reporters Tuesday in the Oval Office, focused broadly on the central bank and not Chairman Jerome Powell.

“They’re raising interest rates too fast because they think the economy is so good,” Trump said. “But I think that they will get it pretty soon.”

After Bloomberg reported that Trump had inquired about firing Powell, administration officials including Treasury Secretary Steven Mnuchin sought to tamp down the idea, only to have Trump rattle investors again on Monday with a Twitter rant aimed at the Fed. That blast didn’t name Powell either.

Mnuchin’s failure to restore market confidence with calls to six major U.S. banks, and then an emergency meeting Monday with regulators, rekindled speculation that the former Goldman Sachs Group Inc. executive could become a new target for Trump’s ire.

The president said Tuesday that he has confidence in the “very talented Mnuchin.”

Equities in Shanghai dropped, despite plans by policy makers to improve financing for the private sector and implement tax cuts. PetroChina Co. led the decline after crude plummeted.

Israeli stocks advanced Tuesday, bucking the gloom. The Tel Aviv Stock Exchange 35 index gained 2.1 percent, reversing a drop of as much as 2.8 percent and snapping a streak of three straight declines.