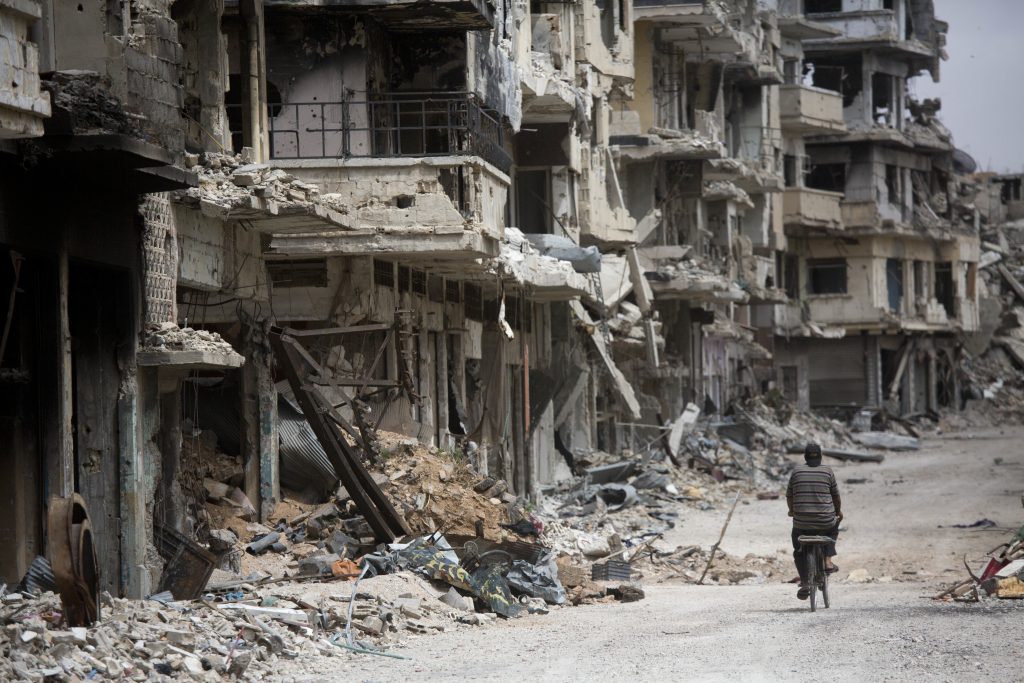 Here, at a glance, is a look at U.S. involvement in Syria:

In September 2014, then-President Barack Obama launched a U.S. air campaign against the Islamic State in Syria, one month after starting airstrikes in neighboring Iraq. The Islamic State had built substantial military firepower in Syria, which it used to sweep across western and northern Iraq earlier in 2014.

In late 2015 the first American ground troops entered Syria — initially 50, growing to the current official total of about 2,000. They recruited, organized and advised thousands of Syrian Kurdish and Arab fighters; dubbed the Syrian Democratic Forces; and pushed IS out of most of its strongholds.

To date, the U.S.-led coalition has launched airstrikes on at least 17,000 locations in Syria since the start of the operation. Last week, there were strikes on 208 locations, largely on Islamic State fighters and facilities in the Middle Euphrates River Valley, according to the U.S. military.

Thousands of IS fighters have been killed or captured, but U.S. military officials say there are still as many at 2,000 insurgents still in the MERV, and a number of others who have escaped to various locations around the country.

Russia joined the big-power entanglement in Syria in the fall of 2015. Moscow said it was there to defeat terrorists, but Washington objected, saying the Russian military was propping up Syrian President Bashar Assad and making it more difficult to eliminate IS. To avoid aerial confrontations and accidents, U.S. and Russian military officials set up a telephone “deconfliction line,” which remains in effect.

Turkey’s concern about links between the U.S.-supported Syrian Kurdish militias and Kurdish insurgents inside Turkey added a further complication for Washington. The Turkish military intervened in northern Syria, prompting the Syrian Kurds to temporarily abandon the fight against IS.

Iran has also maintained a presence in the country, supporting Assad and supplying weapons, the U.S. has asserted.

President Donald Trump said his administration had continued the Syria fight only because of the IS threat. On Wednesday the president tweeted, “We have defeated ISIS in Syria,” and later U.S. officials said he had ordered a full withdrawal of U.S. forces there.

The Pentagon said in a prepared statement that IS-held territory had been “liberated,” but added that the U.S. would continue “working with our partners and allies to defeat ISIS wherever it operates.” Officials refused to say when all U.S. troops would be out of Syria.

REACTION TO THE DECISION: SUPPORTERS

Sen. Bill Cassidy, R-La., said Americans don’t want troops in Syria in perpetuity. “We brought them there to crush ISIS. We’ve crushed ISIS. We have troops in Iraq who can spring over there (to Syria) to do something” if needed.

REACTION TO THE DECISION: OPPPONENTS

The decision has been met with widespread condemnation and only a smattering of support.

Pentagon leaders were largely mum on Wednesday, adhering to the mandate that U.S. civilian leaders make policy and the military salutes and moves forward. But top defense officials have been blunt in recent assessments that the fight against the Islamic State is not over.

Brett McGurk, the administration’s envoy for the fight against IS, said on Dec. 11: “It would be reckless if we were just to say, well, the physical caliphate is defeated, so we can just leave now. I think anyone who’s looked at a conflict like this would agree with that.”

Sen. Marco Rubio, a Florida Republican, called the pullout “catastrophic,” and Sen. Lindsey Graham, R-S.C., deemed it a “disaster in the making.”

Sen. Jeanne Shaheen, D-N.H., said an ill-informed and hasty withdrawal may breathe new life into ISIS and other insurgent groups, and “will also cede America’s hard-fought gains in the region to Russia, Iran and Assad.”