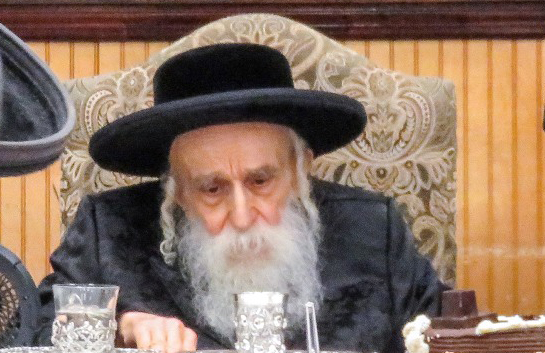 The Kashau Rav, Harav Eliezer Chaim Blum, zt”l, a marbitz Torah and renowned baal darshan, who fought for the purity of Klal Yisrael and served Hashem for decades with phenomenal kedushah and mesirus nefesh, was niftar this past Shabbos, 8 Teves. He was 80 years old.

An outstanding talmid chacham, from a young age, Rav Eliezer Chaim was already known for his thorough knowledge of Shas, poskim, and Shulchan Aruch, and his talmidim and all those who discussed topics in Torah with him marveled at his seeming ability to recall all he had learned with complete clarity.

With a soul that burned with ahavas Hashem and yiras Hashem, he was a general in any cause for the kedushah of Klal Yisrael or in battling anything that threatened its hallowed mesorah. His powerful and tearful drashos on tznius, chinuch, hashkafas haTorah, and the dangers of technology aroused many to consider the weightiness of the issues at hand in a new light.

Though leading a modest-sized kehillah, he commanded so much respect that the high and uncompromising standards he set often had ripple effects throughout a wide range of communities in Klal Yisrael.

Harav Eliezer Chaim Blum was born in 1938 in the town of Mihalowitz, in what was then Czechoslovakia, where his father led a yeshivah. The previous Kashau Rav had been one of the celebrated talmidim of Harav Shaul Brach, zt”l, and was recognized as a Gadol baTorah even in his youth and would go on to be a leading marbitz Torah and warrior for Yiddishkeit for decades in America.

As Czechoslovakia fell under the control of the Nazis, the Blums, together with other Jews in the area, began to suffer from the occupation and were eventually interned in Bergen-Belsen concentration camp. They were among those who would travel to freedom in Switzerland on the Kastner train.

From a very young age, Eliezer Chaim was recognized for his brilliant mind and obvious kedushah. At age five he could recite the entire Sefer Tehillim from memory and several tzaddikim remarked that he bore the image of a “heilige kind.” Even as he grew older and until his last days, the Rav’s dark, piercing eyes radiated purity and holiness.

Following the war, the previous Kashau Rav returned to his native Kashau and spent several years leading the community of survivors who had gathered there. During this time he founded a yeshivah for the many orphans whose chinuch had been cut short by the War and established a beis din which was heavily involved in efforts to help the many women left agunos following the Holocaust.

In 1948, the Blums moved to the United States and settled in Williamsburg where the Kashau Rav established a beis medrash and assumed the position of Rosh Yeshivah of the Tzehlemer Yeshivah. Young Eliezer Chaim learned in Tzehlem soon after his arrival in America and, as he grew older, became one of his father’s most dedicated talmidim, absorbing the traditional style of Hungarian pilpul associated with the Chasam Sofer and his dynasty.

By 20, his own father attested that Rav Eliezer Chaim had mastered Shas and Shulchan Aruch, and bestowed tremendous honor on him.

Rav Eliezer Chaim married Tzipporah Friedman, the daughter of Reb Mordechai Friedman, z”l, a highly respected shochet known for his great yiras Shamayim. Throughout their many years together, the Rebbetzin, tbl”ch, stood at his side with great dedication and loyalty, tending to his every need as well as taking care of their children.

Soon after their marriage, the Kashau Yeshivah was founded in Williamsburg. Though Rav Eliezer Chaim was still a young avreich, his father selected him to deliver a daily shiur and eventually he assumed the post of Menahel and later Rosh Yeshivah.

Feeling that in Williamsburg bachurim could not learn with the purity and undistracted atmosphere desired for growth in Torah, at his urging the yeshivah was moved to Westchester, initially establishing itself in Irvington and later in Bedford Hills where a Kashau community exists to this day.

Rav Eliezer Chaim’s shiurim were known for their great clarity and he encouraged bachurim to aspire to master large tracts of Shas and to cover many blatt each zman. He also delivered daily shiurim in various mussar sefarim including Chovos Halevavos and Orchos Tzaddikim.

In addition to his abilities in harbotzas haTorah, Rav Eliezer Chaim showed great dedication to his many talmidim over the years. Gifted with a soft and caring heart by nature, he could often be found up late at night making whatever efforts he could for a bachur facing a challenge, a pattern that would repeat itself throughout his life with members of his kehillah or even with Jews he hardly knew.

Over 25 years ago, Rav Eliezer Chaim moved to Monsey, where he established a beis medrash and, following his father’s petirah in 2005, he took the reins of the Kashau kehillah, which maintains branches in Monsey, Bedford Hills, and Williamsburg. He established several new mosdos, including a school for girls and a kollel. The Rav continued his father’s complete dedication to leading Kashau’s mosdos in complete accordance to principles and standards of chinuch established by the Gedolim of previous generations. He was steadfast in his refusal to accept government funds that required any compliance regarding education, feeling that its influence both practically and spiritually corrupted pure Torah chinuch.

Each night, the Rav delivered shiurim in both Gemara and Shulchan Aruch, taking extreme care not to miss a session and even delivering them by telephone when he was out of town. His shiurim on sefarim such as Ohr Hachaim and Be’er Mayim Chaim and on topics such as chinuch and tikkun hamiddos reached audiences far beyond his modest beis medrash through recordings that have been sold widely.

Despite the increasing demands on his time from the needs of leading his kehillah and the many vital campaigns he dedicated himself to on behalf of the klal, the Rav, who was known to sleep very little, set aside many hours of his day to learning — often early in the morning and late at night. He leaves behind a treasure chest of writings on a vast array of Torah topics containing an untold number of chiddushim.

The previous Kashau Rav had been raised, and was steeped, in the legacy of Ashkenaz Hungarian Jewry guided by the mesorah of the Chasam Sofer. This tradition defined his approach to limud haTorah and psak as well as his uncompromising battles against any deviation from the age-old traditions of Torah Jews, approaches that were faithfully carried on by his son as well.

During and following the First World War, the Stropkover Rav, Harav Shalom Halberstam, Hy”d, a son of the Shinniver Rav, lived in Kashau and Rav Rafael had been one of the many in the city’s kehillah who were drawn close to the ways of the Chassidus of Sanz and Shinnive through the great tzaddik. Rav Eliezer Chiam’s avodah too, bore a clear mark of the fiery path these tzaddikim had paved, and he clung steadfastly to their minhagim and ways.

The Rav’s heartfelt tefillos were recited amid copious tears and with great concentration. It was not unusual for him to take over 20 minutes to say Ashrei or other sections of davening. He could often be found in a state of deep concentration before davening, focused solely on thoughts of dveikus, oblivious to his surroundings.

Though conducting himself with the utmost humility and making great efforts to hide the lofty levels he had achieved, the Rav’s elevated madreigah was apparent to those who studied him closely. He often fasted and ate very measured amounts; one could sense there was a distance between him and all things worldly.

At the same time, the Rav spent countless hours listening to people’s challenges and counseling individuals not only from within his circle but from diverse walks of life who gravitated to a Yid whose wisdom and insight was well tested and whose caring heart was apparent to those who had any meaningful exchange with him. For people old or young, talmidei chachamim and simple Jews, men and women, he made himself available to offer advice and a sympathetic ear for issues great and small.

To those beyond his circle, the Rav was most widely known for his outspokenness and fearless leadership in an array of battles against threats to Yiddishkeit. A talented and passionate baal darshan, he kept large audiences rapt with his traditionally masterful style, never shying away from any topic that he felt was a matter of kvod Shamayim, regardless of what the cost would be to his wallet or to his honor. The Rav was frequently called on by other kehillos to address difficult matters and often ended his drashos in copious tears.

Topics of taharah and tznius were especially high priorities and in addition to stressing the need for the highest standards in dress, he strongly discouraged women from working in offices and spoke out against other practices which he felt detracted from the purity of a bas Yisrael.

Several years ago, when the New York City Health Department carried on a campaign against mohelim and against parents who adhered to the practice of metzitzah b’peh, the Rav was one of the central Rabbanim involved in fighting to preserve tradition. His passion on the subject was even enough to make a strong impression on then-Mayor Michael Bloomberg who, after a meeting with Rabbanim and askanim, noted that the Rav’s words on the subject had moved him.

The Rav was among the first to cry out against the dangers of the internet and, even as more communities began to take steps toward establishing guidelines, he steadily reminded the tzibbur that more could be done and more had to be done to protect kedushas Klal Yisrael.

He was one of the first to contact Harav Mattisyahu Solomon, shlita, with the idea of holding a mass gathering on the matter, a concept that eventually became the Kinus Klal Yisrael held at Citi Field Stadium. As was his way with all klal issues, once the idea had taken root, he was more than content to take a back seat on the matter, knowing that in many cases, others could rally wider support, which was his only goal.

At the core of the issues for which the Rav led an unbending struggle for decades was the purity of Torah chinuch in accordance with the mesorah of previous generations. He decried any change to what had been practiced in chadarim and yeshivos for centuries from methods of teaching alef-beis to “innovative” teaching methods that had been culled from non-Torah sources; he was especially critical of methodology based in psychology or other secular sources.

While guided by the sincere belief that he was simply holding fast to the mesorah he had inherited, the Rav was well aware of his reputation among many as “extreme,” but knew that by refusing to bend on issues affecting the heart and soul of Klal Yisrael, his influence would be felt far and wide. In fact he once commented, “I know that not everyone will listen to me, but if I remain strong, than there is only so far others can go.”

For the last five years, the Rav suffered increasingly from illness, but continued to serve Hashem with great self-sacrifice, doing all he could not to deviate from his rigorous standards and admirable practices.

He was niftar on Friday evening after the onset of Shabbos. A levayah was held on Motzoei Shabbos at the Kashau Beis Medrash in Williamsburg and later in Monsey, before continuing to Kiryas Kashau in Bedford Hills.