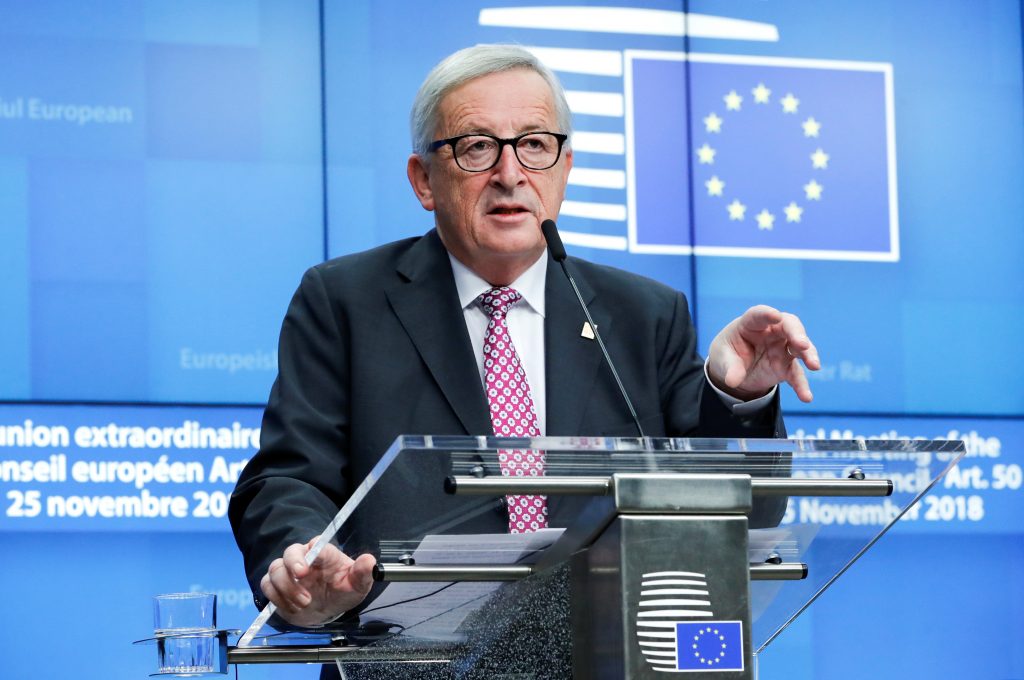 Top European Union officials on Tuesday ruled out any renegotiation of the divorce agreement with Britain, as Prime Minister Theresa May fought to save her Brexit deal by lobbying leaders in Europe’s capitals.

May began her quest over breakfast with Dutch counterpart Mark Rutte, a day after she abandoned a vote in the U.K. Parliament to secure support for the agreement thrashed out with the EU over more than a year. She acknowledged that the deal would be rejected in London “by a significant margin.”

Rutte revealed nothing of their conversation, tweeting only that they had “a useful dialogue which saw us discuss the latest Brexit developments.”

But European Commission President Jean-Claude Juncker warned that the agreement— almost 600 pages long, highly technical and legally binding — cannot be reopened for negotiation at a summit of EU leaders on Thursday. He did say, however, that elements of the deal could still be clarified.

“There is no room whatsoever for renegotiation,” Juncker told EU lawmakers in Strasbourg, France, as he briefed them on the summit.

Juncker, who is set to meet May on Tuesday evening, reiterated that “the deal we have achieved is the best deal possible. It is the only deal possible.”

But he added that “if used intelligently, [there] is room enough to give further clarification and further interpretations without opening the withdrawal agreement.”

EU leaders have often supplemented agreements with political declarations that clarify their interpretation of elements of an accord or provide assurances about how parts of any deal might work.

In Brussels, Danish Foreign Minister Anders Samuelsen also said that EU countries might be willing to clarify parts of the deal.

“It is always a political option to clarify if that is needed, what is meant, what kind of underlining is needed,” Samuelsen told reporters.

The main sticking point since the Brexit talks began is how to keep goods flowing seamlessly between EU member Ireland and the U.K’s Northern Ireland after Britain leaves the bloc.

Concerned that no “hard border” should be created with customs posts and checks — structures that came under attack during Northern Ireland’s sectarian conflict — the EU and Ireland have demanded that a “backstop” guarantee be included. The measure, essentially an insurance policy, would keep Britain under EU customs rules until both sides agree on a better solution, and would only enter into force if no compromise is found by 2020 — though that deadline may be extended.

Opponents say the backstop is unacceptable, arguing that the mechanism binds Britain to the EU because it cannot get out of the customs union unilaterally.

EU leaders have insisted that the backstop cannot be taken out of the deal, but May is sure to seek flexibility on this from her European partners.

“We have a common determination to do everything to be not in the situation one day to use that backstop, but we have to prepare,” Juncker said.

The European Parliament’s Brexit point man, Guy Verhofstadt, agreed that “it is out of the question to renegotiate the backstop.” He added that with the canceled vote in London “we have spiraled again into a new mess.”

But Martin Callanan, Britain’s minister of state at the Department for Exiting the EU, insisted that “the U.K. cannot be trapped permanently in the backstop.”

“It is very important that these have to be additional legally binding reassurances,” he told reporters in Brussels, adding that what lies ahead is “a difficult and complex negotiation.”

If the Brexit agreement is accepted by the U.K. Parliament, it must still be endorsed by the European Parliament before March 29.

In Berlin, May was greeted by German Chancellor Angela Merkel with a handshake in wet, gray weather. They made no comment as they went into their meeting at the chancellery, and no statements or news conference was planned afterward.

A senior German official said May would not get any pledge of new negotiations while in Berlin. And he stressed that the chief negotiators were in Brussels, not the German capital.

Asked on the sidelines of an EU meeting in Brussels what May can expect from Merkel, Deputy Foreign Minister Michael Roth replied: “I hope they will wish each other Merry Christmas, strength and all the best for the new year. It’s good to speak to each other, but there will certainly be no promises of any kind that we will reopen matters now and renegotiate.”

The embattled British premier was due in Brussels later Tuesday for meetings with Juncker and EU Council President Donald Tusk, who will chair Thursday’s summit. Tusk has also ruled out renegotiating the Brexit deal.