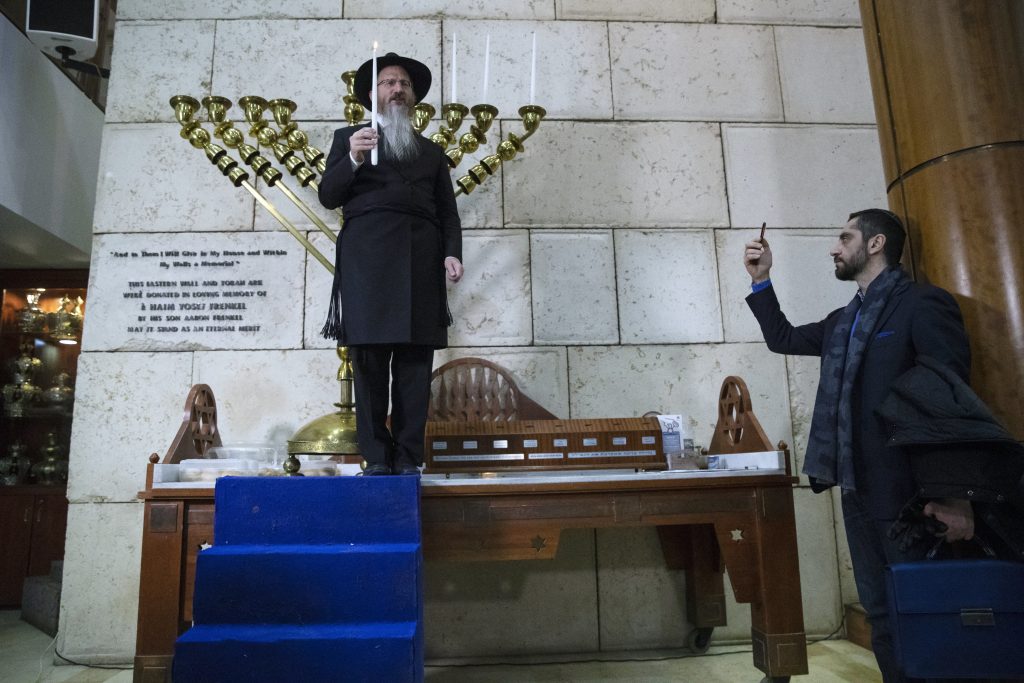 Hundreds of Holocaust survivors around the world marked the third night of Chanukah on Tuesday, with menorah-lighting ceremonies paying tribute to them and the 6 million other Jews who were killed by the Nazis.

Initiated last year by the New York-based organization that handles claims on behalf of Jews persecuted by the Nazis, International Holocaust Survivors Night was expanded this year to include Moscow, a nod to the large number of survivors who live in Russia and other former Soviet countries.

“The sense of Chanukah is in our dear veterans who are present here today,” Russia’s Chief Rabbi Berel Lazar said at the ceremony in the Jewish Community Center and Synagogue in Moscow. “These people have seen war, but never gave up.”

Other ceremonies were held in Berlin and Jerusalem. At a gathering of more than 100 survivors at Oheb Shalom Congregation in South Orange, New Jersey, outside New York City, Hanna Keselman recalled being separated from her parents in Germany by the Nazis. Her mother survived but her father died.

“We are what is left of a people who were not able to celebrate the Jewish religion because another government decided that we were not worthy of existing, much less openly practicing our faith,” the 87-year-old Keselman said. “It is a miracle, after the horrors we faced, that we are celebrating Chanukkah today.”

New Jersey Gov. Phil Murphy, a former ambassador to Germany under former President Barack Obama, told the group that survivors “are owed a debt by each of us, and from all humanity.”

“All of us here who’ve listened have a responsibility to tell your stories to successive generations,” he added.

Greg Schneider, executive vice president of the Conference on Jewish Material Claims Against Germany, said that more than seven decades after the end of World War II, it is more critical than ever to keep the memory of the Holocaust alive.

“We owe it to you, to show you that we will not forget,” he told the group of several dozen survivors and relatives in Moscow. “The Chanukah candles will serve as a reminder from here forward of the importance of preserving memory. We have rebuilt many times in the past; we will never forget those lessons.”

In Berlin, several hundred survivors and relatives packed the German capital’s biggest Jewish community center for a dinner of turkey and rice, washed down with Manischewitz red wine, before lighting a menorah on stage.

Sara Bialas-Tenenberg, a native of Czestochowa, Poland, who survived 4 ½ years in the Nazis’ Gross-Rosen concentration camp, said even though it was good to be among people with whom she had so much in common, the event was “not easy” for her.

She told The Associated Press it brought back memories of her parents, killed in Treblinka, a sister who was shot by the Germans and another sister who simply vanished.

“I was just a child then, 13 years old, I knew nothing of the world and I’d never been away from my parents,” said Bilas-Tenenberg, who turned 91 on Tuesday and has lived in Germany since 1961.

“I miss my mother always and even though I’m now old, I need my mother.”

At Yerushalayim’s Kosel Hamaravi, the holiest place where Jews can pray, more than 250 survivors from across Israel lit candles at sunset after feasting on sweet Chanukah treats.

Colette Avital, chair of the Center of Organizations of Holocaust Survivors in Israel, said her own trauma hiding from the Germans as her family members were killed inspired her to promote Holocaust commemoration, a task she said grows in urgency every year as survivors advance in age.

“The people here are old and ailing and getting sicker,” she said. “We have to celebrate them while we can.”

Shlomo Gewirtz, the vice president of the Claims Conference in Israel, said in the wake of reports of rising anti-Semitism in Europe, the international nature of the ceremony has taken on increased importance.

“We need to make sure more and more people remember,” Gewirtz said. “This event gives us hope — it’s an expression of overcoming the tragedy, bringing people from darkness into light.”

In Berlin, Charlotte Knobloch, a survivor and former head of Germany’s Central Council of Jews, also condemned the increasing anti-Semitism, pledging to those who perished in the Holocaust: “We are here and we are staying.”

“Many of you will never see the light of Chanukah again,” she said. “It is you who we remember.”