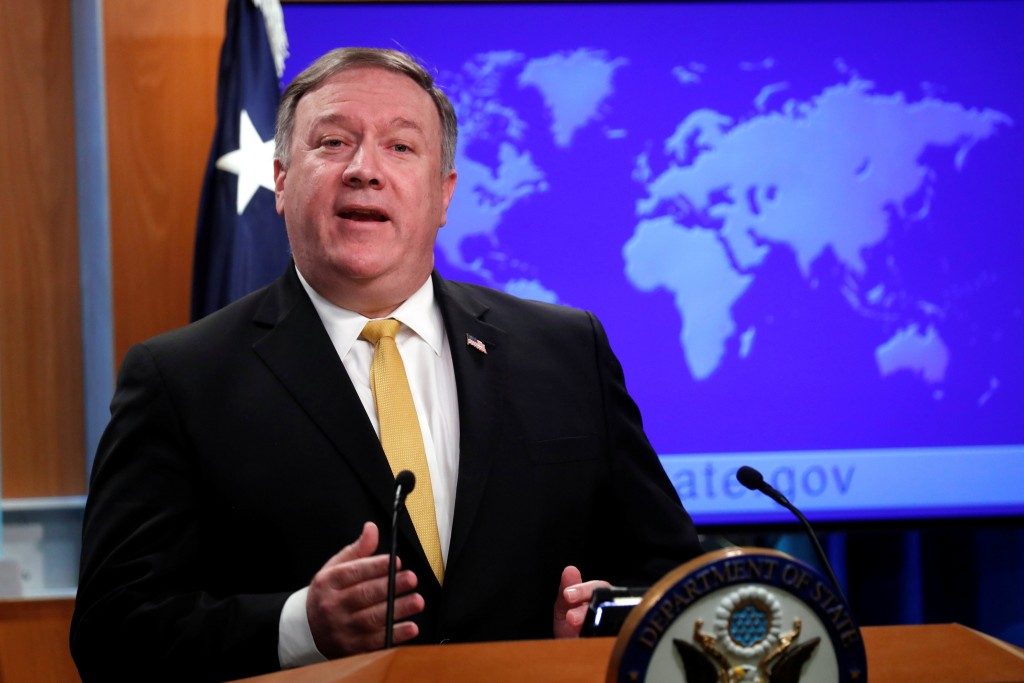 U.S. Secretary of State Mike Pompeo on Saturday condemned what he described as Iran‘s testing of a medium-range ballistic missile capable of carrying multiple warheads as a violation of the international agreement on Tehran’s nuclear program.

Amid tension between Washington and Tehran over ballistic missiles, Pompeo warned in a statement released that Iran is increasing its “testing and proliferation” of missiles and called on the Islamic Republic to “cease these activities.”

In a ceremony carried live on state media, the Sahand destroyer – which can sustain voyages lasting five months without resupply – joined Iran‘s regular navy at a base in Bandar Abbas on the Gulf.

President Donald Trump pulled out of an international agreement on Iran‘s nuclear program in May and reimposed sanctions on Tehran. He said the deal was flawed because it did not include curbs on Iran‘s development of ballistic missiles or its support for proxies in Syria, Yemen, Lebanon and Iraq.

The United States has said its goal is to reduce Iran‘s oil exports to zero. Senior Iranian officials have said that if Iran is not allowed to export then no other countries will be allowed to export oil through the Strait of Hormuz at the mouth of the Gulf.

“This vessel is the result of daring and creative design relying on the local technical knowledge of the Iranian Navy… and has been built with stealth capabilities,” Rear-Admiral Alireza Sheikhi, head of the navy shipyards that built the destroyer, told the state news agency IRNA.

Iran launched its first locally made destroyer in 2010 as part of a program to revamp its navy equipment which dates from before the 1979 Islamic revolution and is mostly U.S.-made.

Iran has developed a large domestic arms industry in the face of international sanctions and embargoes that have barred it from importing many weapons.

Separately, a naval commander said Sahand may be among warships that Iran plans to send on a mission to Venezuela soon.

“Among our plans in the near future is to send two or three vessels with special helicopters to Venezuela in South America on a mission that could last five months,” Iran‘s deputy navy commander, Rear-Admiral Touraj Hassani Moqaddam, told the semi-official news agency Mehr.

Iran‘s navy has extended its reach in recent years, launching vessels in the Indian Ocean and the Gulf of Aden to protect Iranian ships from Somali pirates operating in the area.

The chief of staff of the Iranian armed forces said in 2016 that Iran may seek to set up naval bases in Yemen or Syria in the future, raising the prospect of distant footholds perhaps being more valuable militarily to Tehran than nuclear technology.

“The Iranian regime has just test-fired a medium-range ballistic missile that’s capable of carrying multiple warheads,” he said in the tweet.

“This test violates UNSCR 2231,” he added, citing the United Nations Security Council’s endorsement of the international nuclear agreement. “We condemn this act.”

The Islamic Republic’s government has ruled out negotiations with Washington over its military capabilities, particularly its missile program, which is run by the Revolutionary Guards.

On Tuesday, the head of the Atomic Energy Organization of Iran warned the European Union that Tehran’s patience was running out on the bloc’s pledge to keep up oil trading despite U.S. sanctions. He said Iran could resume enriching uranium to 20 percent purity, if it fails to see economic benefits from the 2015 deal that curbed its nuclear program.