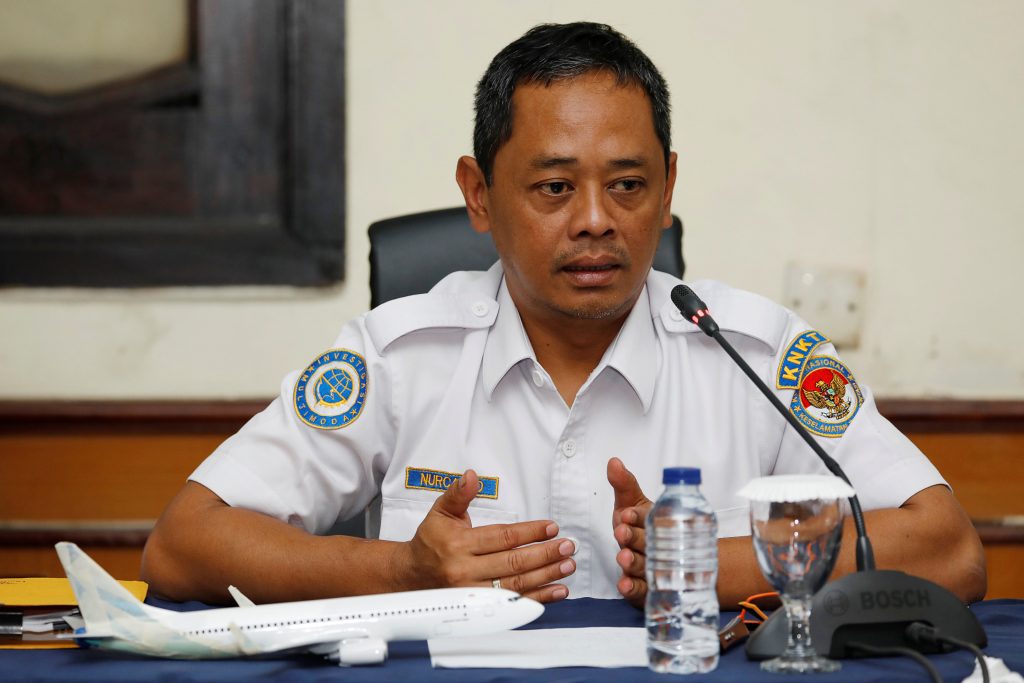 A Lion Air jet that crashed into the sea off Indonesia last month was not in an airworthy condition on its second-to-last flight, when pilots experienced similar problems to those on its doomed last journey, investigators said on Wednesday.

Contact with the Boeing 737 MAX jet was lost 13 minutes after it took off on Oct. 29 from the capital, Jakarta, heading north to the tin-mining town of Pangkal Pinang.

In a preliminary report, Indonesia’s transport safety committee (KNKT) focused on the airline’s maintenance practices and pilot training and a Boeing anti-stall system but did not give a cause for the crash that killed all 189 people on board.

The report unveiled fresh details of efforts by pilots to steady the jet as they reported a “flight control problem,” including the captain’s last words to air traffic control asking to be cleared to “five thou” or 5,000 feet.

Information retrieved from the flight data recorder showed the “stick shaker” was vibrating the captain’s controls, warning of a stall throughout most of the flight. The captain was using his controls to bring the plane’s nose up, but an automated anti-stall system was pushing it down.

Pilots flying the same plane a day earlier had experienced a similar problem, en route from Denpasar, Bali to Jakarta, until they used switches to shut off the system and used manual controls to fly and stabilize the plane, KNKT said.

“The flight from Denpasar to Jakarta experienced stick shaker activation during the takeoff rotation and remained active throughout the flight,” the committee said.

“This condition is considered as un-airworthy condition” and the flight should have been “discontinued.”

The pilots of that flight reported problems to Lion Air’s maintenance team, which checked the jet and cleared it for take-off the next morning.

“It’s not something you ever want to have happen as a pilot,” he said.

KNKT investigator Nurcahyo Utomo said the agency had not determined if the anti-stall system, which was not explained to pilots in manuals, was a contributing factor.

“We still don’t know yet, if it contributed or not,” he said in response to a question. “It is too early to conclude.”

In a statement, Boeing drew attention in detail to a list of airline maintenance actions set out in the report but stopped short of blaming ground workers or pilots for the accident.

The manufacturer, which has said procedures for preventing an anti-stall system activating by accident were already in place, said pilots of the penultimate flight had used that drill but noted the report did not say if pilots of the doomed flight did so.

Boeing’s statement did not make any reference to a revised anti-stall system introduced on the 737 MAX which U.S. pilots and Indonesian investigators say was missing from the operating manual.

Boeing says the procedure for dealing with a so-called runaway stabilizer, under which anti-stall systems push the nose down even when the plane is not entering a stall or losing lift, had not changed between an earlier version of the 737 and the newly delivered 737 MAX.

Pilots however say the control column behaves differently in certain conditions, which could confuse pilots who have flown the earlier model.

Indonesian regulators were urged after previous accidents to improve their oversight of maintenance and pilot training.

In an interview, Indonesia’s director general of aviation, Polana Pramesti, said the agency planned to require pilots in Indonesia to be trained on simulators for the MAX series.

Pramesti also said a new regulation was being planned to limit the risk of pilot fatigue occurring and should be issued in the “near future.”

A source at the U.S. Federal Aviation Administration said a number of factors were ultimately likely to be cited as causes of the crash, including pilot training and maintenance.

It had still to be determined how much, if at all, the plane design would be faulted, the source told Reuters on condition of anonymity.

Edward Sirait, chief executive of Lion Air, said he had not read the KNKT report but would comply with investigators’ recommendations.

Authorities have downloaded data from the flight data recorder, but are still looking for the cockpit voice recorder (CVR).

Indonesia plans to bring in a ship from Singapore able to stay in position without dropping anchor, to help with the search.

Asked what was needed from the CVR, Utomo said: “A lot. Discussions between the left and right pilots were about what? What procedures did they carry out. Were there any strange noises?”

Without it, he said there would be “a lot of guessing.”