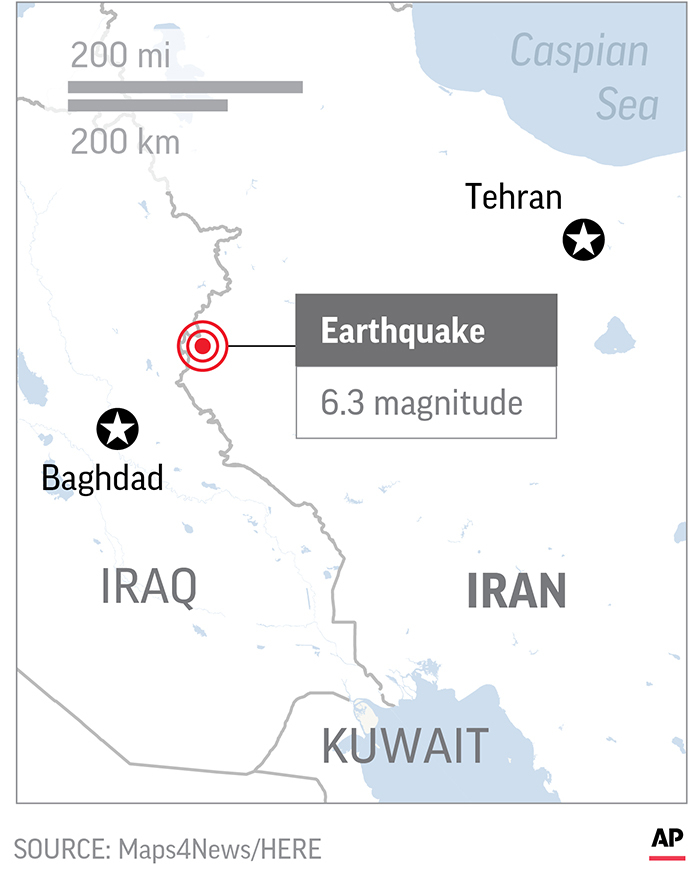 Iran said on Sunday that no fatalities had been reported but that about 500 people were injured after an earthquake of magnitude 6.3 struck near its western border with Iraq, Iranian state TV reported.

The tremor was also felt in the Iraqi capital Baghdad and in Kuwait.

“About 500 people have been injured … but we have had no fatalities,” Houshang Bazvand, the governor of Kermanshah province, told state TV.

Fears of aftershocks sent people in several cities in the western province of Kermanshah out onto the streets and parks in cold weather, Iranian media reported. Rescue teams were immediately deployed to the quake-hit area.

“No reports of any fatalities yet and most of the injured were hurt while fleeing, not due to quake damage,” Pirhossein Koulivand, head of Iran’s emergency services, told state TV.

The quake triggered landslides, but officials said all the roads in the area remained open to traffic and electricity had been restored in most of the areas hit by the tremor.

The U.S. Geological Survey (USGS) said the earthquake occurred at a depth of 65 km (40 miles) and struck 114 km northwest of the city of Ilam, close to Iran’s border with Iraq.

Iranian media said tremors were felt in at least seven provinces of Iran, most strongly in Kermanshah province, where last year over 600 people were killed, and thousands injured, in Iran’s deadliest earthquake in more than a decade.

Local officials said reconstruction undertaken after that strong quake should mean there would not be casualties.

Kermanshah governor Bazvand said some 50 people were injured in the town of Sarpol-e Zahab, about 15 km (10 miles) from the border, near the quake’s epicenter. The Iraqi Geological Survey said the quake had been felt in Baghdad, where the interior ministry said no damage or casualties were reported, Erbil in the Kurdistan region, and other Iraqi provinces.

The quake was felt in some areas of Kuwait, but no damage was reported, state news agency Kuna said.

“Fortunately, the quake was not near bigger cities. But it might have caused damage in villages and I hope not that many villages are located where it hit,” Ali Moradi, head of Iran’s seismology center, told state TV.

Iran sits astride major fault lines and is prone to frequent tremors. Last November, a magnitude 7.3 earthquake hit the Kermanshah province. In 2003, a quake of a magnitude of 6.6 in Kerman province killed 31,000 people and flattened the historic city of Bam.