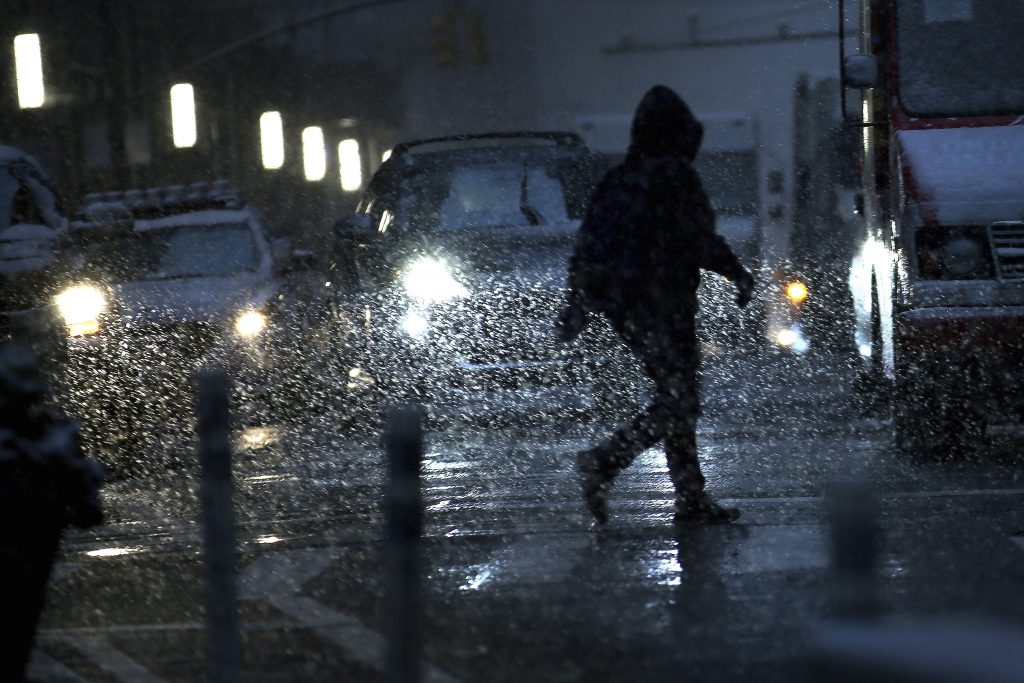 The first snowfall of the season lingered Friday in the Northeast as thousands of exhausted commuters pointed their fingers at politicians and meteorologists for leaving them creeping along highways or stuck in mass-transit hubs.

Some students in West Orange, New Jersey, were forced to sleep at their schools after their buses turned back, while others were taken to a diner to eat because snow-covered roads were clogged with traffic Thursday.

“Students are safe in their schools with teachers and staff. They have eaten dinner and are preparing to get some rest,” a district alert said.

They were not alone in finding the ride home difficult. Former New Jersey Gov. Chris Christie tweeted that it took him nearly six hours to travel a distance that normally would take 45 minutes.

Bridges and major roads in the New York metropolitan area reopened Friday after many closures caused by crashes during Thursday’s storm.

Some drivers woke up in their cars Friday morning after being stuck overnight on the Major Deegan Expressway in the Bronx. Accidents on the George Washington Bridge halted traffic on the crossing and led to backups in New York and New Jersey.

New York City Mayor Bill de Blasio said he understands why people are frustrated that city officials were caught off guard by a snowstorm that stranded some New Yorkers in their cars for hours.

De Blasio said on New York 1 Friday that the city “will do a full review of what happened here.”

A mayoral spokesman said the early storm meant that the Metropolitan Transportation Authority didn’t have snow chains on its buses. He said many of them had to pull over, “further clogging streets.”

New Jersey Gov. Phil Murphy, who tweeted that the storm was worse than forecast, was slated to hold a briefing Friday.

NJ Transit bus passengers were told to expect substantial delays and cancellations Friday because many drivers, who inched their vehicles in the snow and ice, worked past their normal schedules and federal law mandated a rest period for them.

The delays for buses caused a logjam of commuters Thursday, forcing officials to close the doors at New York’s Port Authority Bus Terminal.

The wintry weather caused a traffic nightmare on a 30-mile stretch of Interstate 78 in Pennsylvania, with numerous vehicles stuck for several hours from the Lehigh Valley to the New Jersey state line. Police sometimes drove on the opposite side of highway, honking their horns to wake up drivers who had fallen asleep.

About 105,000 homes and businesses were without power Friday in Pennsylvania, mostly in the western part of the state.

Some areas of Massachusetts received more than nine inches of snow in the storm, which turned to rain overnight to complicate the morning commute.

The towns of Topsfield, Carlisle and Billerica, northwest of Boston, were among the towns that got more than nine inches of snow, the National Weather Service said. Boston got less than three inches.

Many schools in northern New England were delayed or closed after the region saw anywhere from four to eight inches of snow. Interstate speeds in New Hampshire and Maine were lowered to 45 mph.

Schools were closed or were opening with delays in upstate New York, including in the Albany and Syracuse areas.

The storm left seven people dead as it moved through the Midwest and South.