Remembering the War to End All Wars 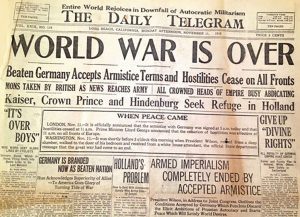 On November 11, 1918, the Associated Press sent out a news story that was headlined in bold letters “The War Is Over.”

The greatest war in history ended Monday morning at 6 o’clock Washington time, after 1,567 days of horror, during which virtually the whole civilized world had been convulsed.

This past Sunday, U.S President Donald Trump, Russian leader Vladimir Putin and dozens of other heads of state gathered in Paris to mark 100 years since the end of a conflict once known as the “war to end all wars,” but was followed only 20 years later by the even deadlier World War II.

The spark that set off the conflagration was when Gavrilo Princip, a Serbian Nationalist, assassinated Archduke Francis Ferdinand, nephew and presumptive heir of Emperor Franz Josef of Austria-Hungary. Within weeks, Austria and its close ally Germany were at war with Russia.

The war soon spread to much of Europe and parts of Africa and Asia. Eventually, the United Kingdom (including Australia, Canada, and India), Italy, the United States, Belgium, China, Greece, Japan, Montenegro, Portugal, and Rumania joined the war on the side of France and Russia.

The Ottomon Empire (which included the land that is present-day Turkey) and Bulgaria soon joined the side of Austria-Hungary and Germany. Before the war would end some four years later, it would claim the lives of almost 10 million soldiers, sometimes tens of thousands on a single day, and some six-and-a-half million civilians. It toppled four great empires, and permanently changed the face of Europe.

What often is unrecognized is the profound and devastating effect that World War I would have on Eastern European Jewry.

The battlefield tragically pitted Jew against Jew. Some 400,000 Jews were forcibly enlisted in the Tsar’s army, and 200,000 Jews served in the German and Austrian armies.

In sharp contrast to World War II, the most heinous persecution of the Jews came primarily at the hands of the Russians, while the Germans actually sought the support of the Jews and were sensitive — relatively speaking — to their communal needs.

According to the classic textbook Witness to History, Russian forces rolled through Galicia — which was home to a million Jews — six times between 1914 and 1917. During each failed attempt to capture the area, Russian troops were given full license by their commanders to wantonly loot, kill, and ravage Jews in every town they entered. Hundreds of thousands of Jews, including many of the leading Gedolim of the era, were forced to flee their homes. Their possessions stolen, their houses burned and pillaged, many were forced to wander from town to town, penniless and starving.

Seeking safety in the larger cities, large numbers of refugees poured into Vienna, Budapest, Warsaw, Cracow and Vilna. There too, far from the towns and villages their families had resided in for generations, they endured abject poverty and much suffering.

Even when the war finally came to an end, many of the refugees discovered that they had no home to return to. Even those who did, found a vastly changed spiritual, political, and economic landscape. In those desperate times, large numbers of Jews fell prey to Zionist, socialist and other ideological movements. Their connection with their heritage was gravely weakened — even severed completely. Parents looked on, powerless and in horror, as their offspring were duped into abandoning Yiddishkeit.

In the aftermath of the war, Poland — which had finally attained its independence — passed increasingly oppressive laws that forced most of Polish Jewry into abject poverty. Violent anti-Semitism was rife, and the Polish government did all it could to persecute its Jewish population, including with a ban on shechitah. In Russia, the Tsar was ultimately replaced by the Communists, who spent much of the next seven decades successfully tearing millions of Jews away from Torah and mitzvos.

Yet, despite the odds, in a most powerful testament to the miraculous siyatta diShmaya that Am Yisrael has merited, amid all the devastation and destruction, the post-World War I period was also one of great spiritual accomplishment. With enormous mesirus nefesh, Jews continued to loyally serve the Ribbono shel Olam. The great citadels of Torah study flourished, both in Poland and in Lithuania, and multitudes flocked to the courts of the Chassidic Rebbes of the time. A great many of these spiritual heroes were later killed al Kiddush Hashem during the Holocaust, but the example of their strength and valor continues to inspire us to this very day.