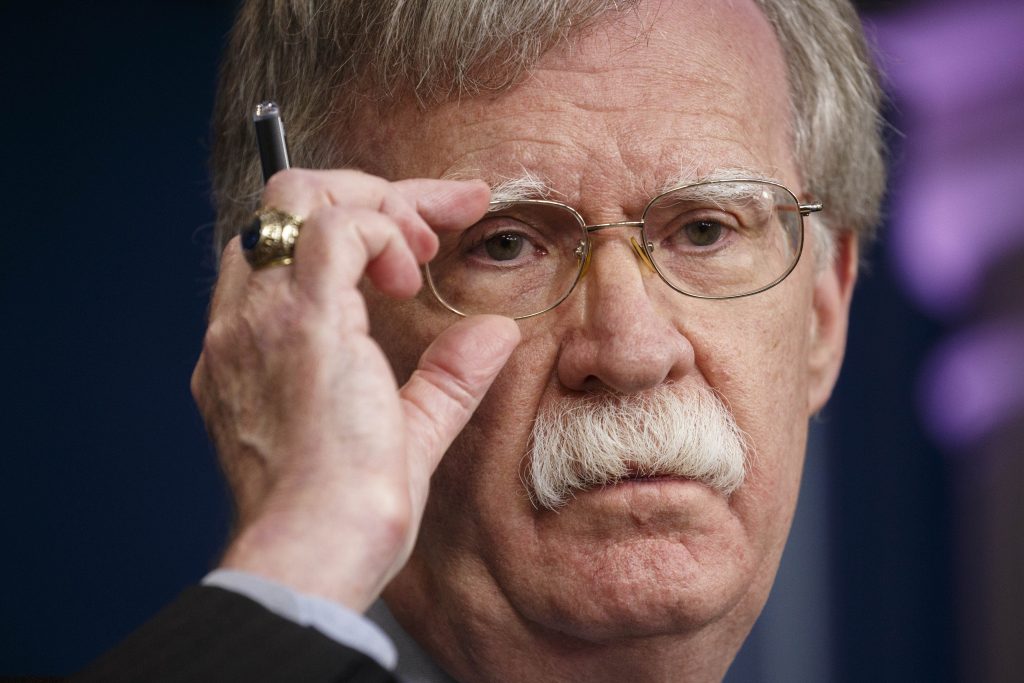 As the U.S. prepared to impose new sanctions against Iran’s energy and banking sectors, senior Trump administration officials faced an internal rebellion from conservatives who accused them of being too weak toward the Islamic Republic.

That 11th-hour rupture sent officials at the departments of State and Treasury rushing last week to reassure normally steadfast political allies and harden their messaging on the sanctions announced Monday against 700 banks, individuals and other entities, according to three people familiar with the discussions.

Opposition to Trump’s sanctions strategy — particularly the decisions to issue temporary oil waivers to eight countries and how aggressively to target Iranian ties to global financial networks — arose most prominently from a handful of Republican senators and National Security Adviser John Bolton, according to the people.

President Trump justified the decision to issue waivers, telling reporters Monday that “we want to go a little bit slower because I don’t want to drive the oil prices in the world up. It would cause a shock to the market.”

That approach worked, with crude prices declining over the past several weeks as reports of waivers leaked into the energy market. But the last-minute pressure and the administration’s response could have lasting ramifications.

For one thing, the administration will be hard-pressed to justify extensions to the waivers when they come up for review in another 180 days. Recipients are supposed to use the waiver period to make significant progress cutting Iranian oil imports, which have already been reduced by about one million barrels per day since May.

“You take a million barrels out of the market, that’s a lot,” said Kevin Book, managing director of Washington-based consultancy ClearView Energy Partners. “But the next million, million and a half, may not be easy and it could be impossible.”

There were two major points of contention as the clock ticked toward Nov. 5, the day that the sanctions would snap back. One was how many countries should get so-called Special Reduction Exemptions to keep importing Iranian oil. The other was how hard to pressure Swift, the Brussels-based financial messaging service that’s crucial to the global movement of money, to cut off Iranian banks. Hardliners argued for a complete break, while others within the administration wanted a looser approach.

One person familiar with the deliberations said the concern among some officials at Treasury was that kicking all Iranian banks off the messaging service would only further alienate European allies — who wanted to sustain ties with Iran and shut the door on financial transactions related to food and medicine.

All through the process, Secretary of State Michael Pompeo and his team had to address competing interests. If they offered too many loopholes, they’d be accused of being weak on Iran. If they clamped down so hard that oil prices spiked and gas prices in the U.S. jumped, they’d infuriate the president and possibly hand a campaign talking point to Democrats on the eve of the congressional midterms.

The State Department had to fend off a last-minute challenge to its planning process last week when Dan Brouillette, the deputy energy secretary, sent a memo to the department objecting to the decision to grant waivers and saying the administration should take a tougher line against Iran, one of the people said.

Officials at the Energy and State departments didn’t immediately respond to requests for comment about the internal deliberations. A Treasury spokesman declined to comment.

More significantly, displeasure over the measures reached into the White House. According to the three people familiar with the matter, National Security Adviser Bolton felt that the oil waivers especially were too lenient. The waivers also prompted conservative U.S. critics of the administration’s approach — including Republican Senators Marco Rubio and Ted Cruz — to say the White House was caving in on its tough line and to vow legislation to close what they consider loopholes.

“Sanctions waivers being given to key purchasers of Iranian oil, most alarmingly China, give Iran a financial reprieve, and should be eliminated as soon as possible,” Rubio said in a press release on Friday. Cruz said it was important that “final policy imposes maximum pressure” on Tehran.

The criticism was more blunt from United Against Nuclear Iran, an outside group chaired by former Connecticut Senator Joe Lieberman that has advocated a tough stance.

The criticism put Pompeo on the defensive in an interview on Fox News, when he was asked repeatedly to explain the decision to issue waivers.

When Mnuchin spoke to reporters on Nov. 2, he was explicit that Swift risked being punished unless it disconnected any Iranian banks designated for sanctions.

At the same time, the State Department has declined to say how much it will require countries to reduce oil exports to keep getting waivers. It’s also refused to say how much they’ll be allowed to import. One of the people familiar with the discussions said the administration would demand more than the 20 percent reductions the Obama administration required for new waivers.

“I believe the Trump administration would not be satisfied with 20 percent more over the next six months,” said Mark Dubowitz, chief executive of the Foundation for Defense of Democracies, a Washington-based nonpartisan policy institute. “They still want to get to zero.”

By the end, the shift to a more aggressive strategy from Pompeo and Mnuchin seemed to work — at least for the time being.

Stepping away from its earlier criticism, Lieberman’s group praised the sanctions. Even Bolton, who had been silent on the matter since late last week, did a media appearance on Fox News on Monday to underscore the seriousness of his intent to strangle Iran’s economy.

“I think we’ve said for a long time that zero should mean zero,” Bolton said. “We’re going to do everything we can to squeeze Iran hard — as the British say, to squeeze them until the pips squeak.”