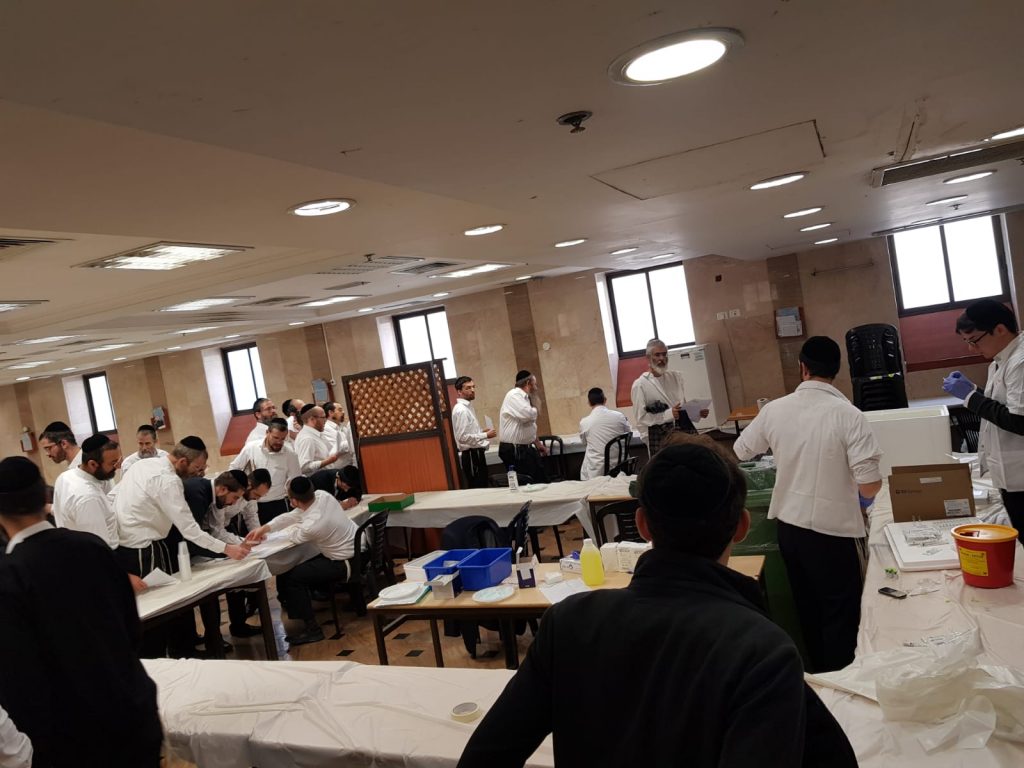 After eight bachurim in Yeshivas Mir in Yerushalayim were hospitalized after being diagnosed with measles, medical teams arrived at the yeshivah on Tuesday morning to vaccinate all the bachurim, both Israeli and overseas bachurim.

The dining room of the yeshivah has a medical staff that is vaccinating those who haven’t had vaccinations, or do not know whether they have been vaccinated.

The recent outbreak of measles is causing great concern in Israel and around the world.

On Tuesday morning Moshe Bar-Siman Tov, Director-General of the Health Ministry said that since the beginning of 2018, “1,340 people contracted the disease, 99 percent of whom were not vaccinated.

“Although we’ve done a lot of things recently, every day we hear about more contagion and more people who have been exposed.”

Sixty percent of those diagnosed with the disease are in Yerushalayim, Health Ministry figures indicate, and a campaign to convince people in the city to get inoculated will be expanded

In the past few weeks, Dr. Breyer, the medical director of the Maayanei Hayeshua Hospital in Bnei Brak, visited the homes of leading Rabbanim and Poskim and spoke with them about the outbreak of measles, and the Rabbanim agreed that according to Halachah, anyone who is not yet vaccinated against the virus must immediately do so.

The Rabbanim ruled that someone who is not vaccinated is not only defined as a ‘shofech damim‘ because of the harm he may inflict on himself, but also enters into the framework of ‘chav l’achrini, harming others’ because the disease spreads rapidly from one person to another.

With the sharp increase in cases of measles, Health Ministry officials are considering banning individuals who have not been inoculated from areas of hospitals where more vulnerable patients are hospitalized. That could include intensive care units, oncology, hematology and obstetrics departments of hospitals.

In addition, officials are discussing the possibility of lowering the age of when infants can be given a shot – from the current 12 months to nine months.