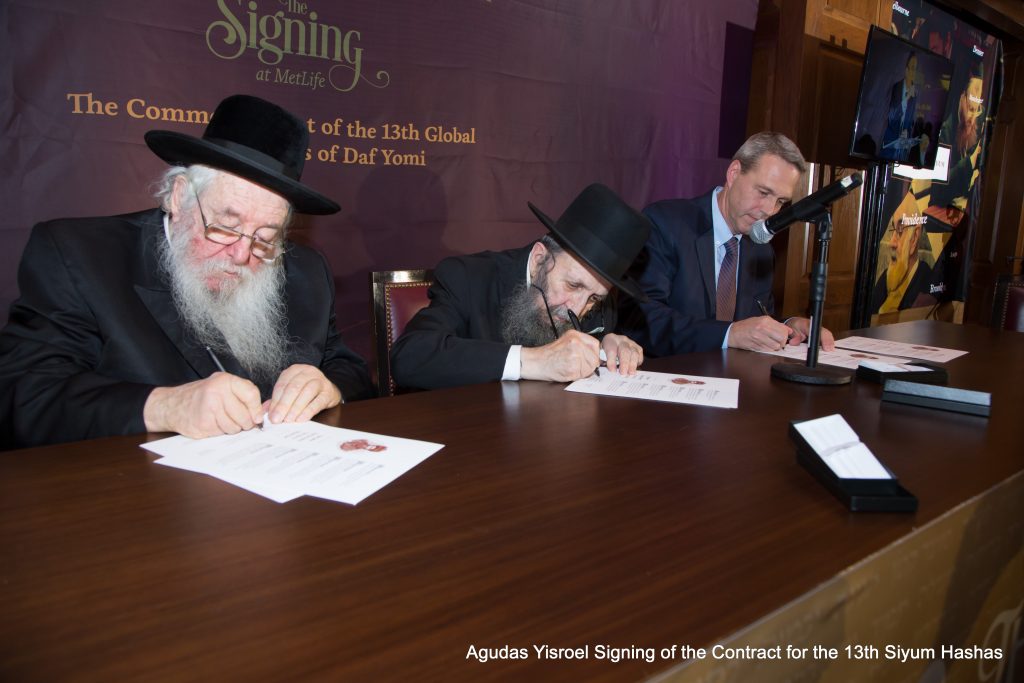 Nothing brings back more potent memories for Torah Jews than flashing back to August 2012 as they stood 90,000 strong, led by our gedolim, the words Shema Yisrael piercing the very heavens. Those unforgettable moments came to life again on October 30th at MetLife Stadium, as a group of community leaders, askanim, and Gedolei Yisrael joined together to sign the contract for The 13th Siyum, which will be held on January 1st, 2020 at MetLife Stadium.

While The Siyum may be more than a year away, preparations have already been taking place at a feverish pace. At the reception in the Commissioner’s Lounge, participants heard from the Agudah’s chairman of the board of trustees, Shlomo Werdiger. He expressed his enthusiasm for the upcoming Siyum Hashas and shared his memories of the previous Siyum at MetLife Stadium. Mr. Werdiger noted that the Agudah felt privileged to be returning to the same venue for the upcoming event. It is expected to draw hundreds of thousands of participants worldwide.

Both the Novominsker Rebbe and HaRav Shmuel Kamenetzky, mambers of the Moetzes Gedolei HaTorah, offered divrei bracha and spoke about the incredible Kiddush Hashem of the previous Siyum. The Rebbe shared his thoughts about the awesome sight of seeing tens of thousands of people gathered together in celebration of Torah, while Rav Kamenetsky recalled how security officers were awed by the dignity and demeanor of the gathering, a stellar example of a Torah-true celebration. Rabbi Shlomo Gertzulin, Agudath Israel’s Executive Vice President for Finance and Administration, who chaired the event, introduced MetLife Stadium CEO and President Ron VanDeVeen. Mr. VanDeVeen expressed his own excitement at being accorded the honor of hosting The Siyum again, noting that the August 2012 Siyum was for him the most inspiring and meaningful event held at the stadium.

The atmosphere in the air was electric when the contract for The Siyum was signed by the Novominsker Rebbe and Rav Kamenetsky, on behalf of the Moetzes Gedolei HaTorah and the Agudah, and Mr. VanDeveen, on behalf of MetLife Stadium. Participants erupted in spontaneous song, celebrating the jubilant moment that signified that the Daf Yomi program was entering its long awaited final stretch. The emotional undercurrent in the room was further amplified when Agudah board of trustees member Rivie Schwebel took to the microphone, singing Rav Meir Shapiro’s unforgettable composition Ashrei Adam Oz Lo Voch, a heartwarming tribute to the founder of the Daf Yomi.

Addressing the crowd, Chairman of the Siyum Steering Committee Shmuel Yosef Rieder shared a directive from the Novominsker Rebbe, Rosh Agudas Yisroel, who noted that The Siyum is much more than a celebration of the conclusion of the Daf Yomi cycle.

“With tears in his eyes, the Rebbe passionately declared that the theme of this Siyum will be Ki Heim Chayeinu, an unequivocal declaration that Torah is the essence of our lives,” said Mr. Rieder. “With this siyum, we will be building on the great legacy of Rav Meir Shapiro zt’l who understood that studying a daf of Gemara each day provides a person with a spiritual lifeline. That learning serves as a daf shel sefina, keeping him afloat even in the stormiest seas of life, and numerous new initiatives will be undertaken in conjunction with the upcoming siyum to further promote daily limud haTorah.”

Several members of the Agudah’s next generation of askanim who are working on new initiatives to further promulgate Torah study spoke next. Chesky Eider, Shragie Goldschmidt, David Solomon and Yehuda Zachter all shared their excitement about Masmidei HaSiyum, which will have children learning tens of thousands of Mishnayos and Chavrei HaSiyum, which will inspire thousands of kehilos to make joint siyumim on Mesechtos, full Sedarim and even Shas. Also announced were an initiative to establish hundreds more Daf Yomi shiurim around the world and plans for additional partnerships to make The Siyum an unqualified success.

After enjoying eloquent divrei Torah by Rabbi Eli Mansour, participants were invited into the Commissioner’s Club suites overlooking the stadium’s sweeping field. A video playing on MetLife’s massive display monitors featured Rabbi Yissocher Frand expounding on the upcoming Siyum, whose majesty and glory will be an unparalleled display of k’vod shomayim and will hopefully inspire thousands more to begin learning Daf Yomi. The entire experience was both emotional and powerful, remarked several individuals in attendance.

“As we stood there overlooking the stadium, it felt like the walls were still reverberating with Torah,” one participant related.

To find out more about the upcoming Siyum and to stay informed of all the latest developments of this historic event, sign up at info@thesiyum.org. It’s time to get ready for The Siyum! Join a Daf Yomi Shiur, sign up your Shul for Chavrei HaSiyum or start a seder with your son in Mishnayos or Gemara. Let’s all live with Ki Heim Chayeinu and strengthen our commitment to Torah in order to ensure that the upcoming siyum is the greatest ever.