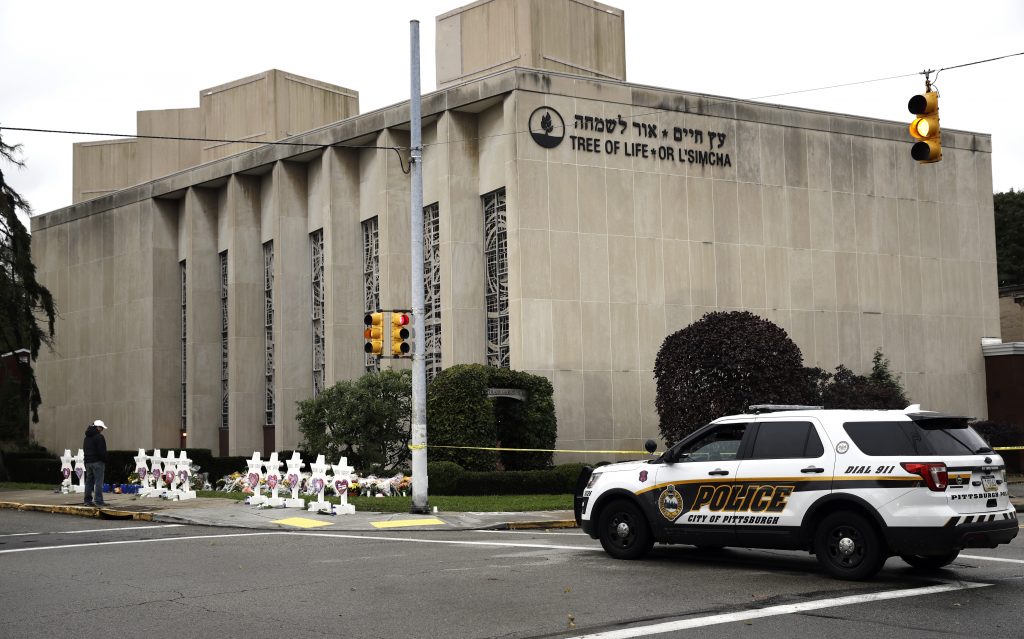 There is one appropriate response to the bloodshed in Pittsburgh this Shabbos: Horror.

Horror that a congregation in a quiet Jewish neighborhood should become the scene of a massacre.

Horror that congregants who had gathered together to pray were subjected to what FBI agent Robert Jones called the “most horrific crime scene” he had witnessed in his 22-year career. Eleven innocent Jews, most of them elderly, were gunned down by a storm trooper, a despicable anti-Semite who fired randomly while calling out “all Jews must die.”

Horror that a scene from pre-war Europe could be played out in the United States in 2018, 80 years — almost to the day — since Kristallnacht. (To be sure, there is no comparison between pre-war Europe, where the majority supported violence against Jews and Jewish institutions, and the United States, where the vast majority are repulsed by it. As Gov. Tom Wolf of Pennsylvania, said: “These senseless acts of violence are not who we are as Pennsylvanians and are not who we are as Americans.”)

And the genuine horror and outrage at such a tragedy should produce Jewish solidarity and unity.

To our great sorrow, there are those who, in their cynical disregard for kvod hameis and respect for the mourners, have seized upon the killings as an opportunity to score political points.

In Israel, before the names of the victims were even released, political analysts were blaming President Donald Trump for the massacre, saying that his brand of nationalism had bred hatred for the “other.”

Others, including Jews in America, said the president’s decision to move the U.S. embassy to Yerushalayim was the cause of the atrocity, as if anti-Semites never attacked Jewish targets when the embassy was in Tel Aviv.

Even more absurdly, a well-known Jewish writer blamed Prime Minister Binyamin Netanyahu for the killings. In response to Diaspora Affairs Minister Naftali Bennett’s announcement that he would be flying to the United States because “when Jews are murdered in Pittsburgh, the people of Israel feel the pain,” this well-known personality wrote:

“Go home. Netanyahu’s interventions in U.S. politics aided in the election of Donald Trump and his raw and relentless validation of white nationalism and fascism. The American Jewish community is now bleeding at the hands of the Israeli prime minister. And many of us know it.”

Those who don’t like either political leader have many legitimate tools at their disposal to try and topple them, including donating money to their opponents, writing blistering op-eds criticizing their policies, organizing demonstrations against them, and so on.

But to blame President Trump — the most pro-Israel president ever, whose inner circle is made up largely of religious Jews — and Prime Minister Netanyahu for the massacre is to distort their positions and to let the perpetrator off the hook. There is only one person responsible for the atrocity: The vile anti-Semite who pulled the trigger, again and again and again.

Unfortunately, the political agendas aren’t limited to bringing down the leaders of the United States and Israel. They also include the campaign to gain recognition for the Conservative and Reform movements in Israel, which has nothing to do with this week’s tragedy.

Oren’s sentiment, echoed (not surprisingly) by Yesh Atid chairman Yair Lapid, is based not on a distortion, but on a flat-out lie. No one ever questioned whether so-called liberal Jews were “Jewish enough” to come pray at the Kosel, to be granted automatic citizenship under the Law of Return, or, l’havdil, to be murdered al kiddush Hashem.

When religious Jews all over the world made Havdalah on Motzoei Shabbos and then learned of a massacre in a congregation, no one asked what denomination it was. It made no difference. Jews were killed for being Jews, and our hearts go out to them and their families.

All the political spin, whether coming from Jews in Israel or Jews in the United States, whether from the left or the right (“the message of the massacre is that everyone must move to Israel”) are a chillul Hashem.

What makes matters worse is that the reactions from non-Jews, at least at first, were reverence and deeply felt emotion for the loss of Jews murdered in a congregation. Security officials and journalists were visibly moved as they reported on the tragedy.

That’s the place where we all need to stay. The sense of loss, the concern for the survivors, the insistence that everything be done to ensure that such atrocities do not recur and that Jews who come to synagogue, in whatever place and whatever denomination, are safe.