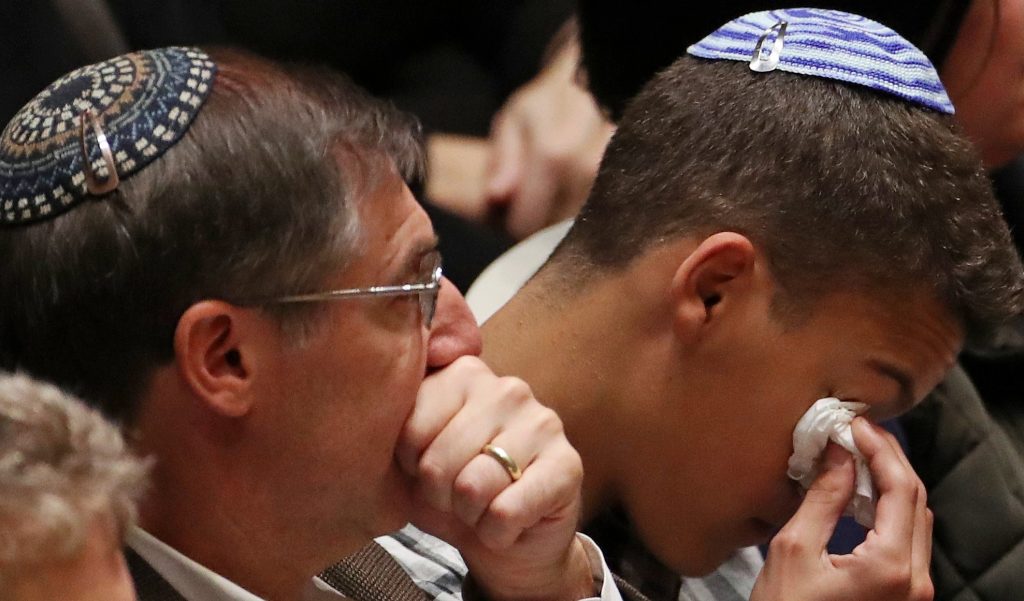 A day after a horrific shooting murdered 11 Jews at the Tree of Life Congregation in Pittsburgh, the city’s Jewish community was still reeling from the gravity of the tragedy, thought to be America’s largest attack against Jews.

Rabbi Sam Weinberg, principal and educational director of the Hillel Academy of Pittsburgh told Hamodia that the close-knit nature of the city’s Jewish community has made the events even more painful.

“I don’t think that I’ve adequately processed it yet,” he said. “We’re a small community where everyone knows everyone, so we are all affected…but we Jews are a resilient people and we will be bigger than this.”

As the attack occurred Shabbos morning, many learned during davening that a shooting was in progress in the area.

Congregation Poale Tzedek, a shul near the scene, was temporarily placed under a police lockdown while police neutralized the shooter at Tree of Life Congregation.

“I started to hear ambulances during davening, and then when we started saying Av Harachamim, someone came over and told me what was going on, and the significance of the tefillah for generations of Kedoshim was very powerful,” said Rabbi Daniel Yolkut, the shul’s Mara d’Asra. “We stopped and said Tehillim, but I stressed that the most important thing for us to do right now is to keep davening.”

As the passage of time allows more opportunity to process the events, Rabbi Yolkut was stressing the “power of speech” in dealing with different aspects of the tragedy.

“The messages are familiar ones, but they are much stronger at a time like this — tefillah, chessed, achdus — I’ve spoken about what we can do with our words, not only davening, but how much a kind word can do, and how careful we have to be not to say something that could hurt another person, especially in a time of grief.”

By around noon, the area had been secured and all were permitted to leave the shuls and return home, albeit with a warning to remain vigilant.

The scene of the deadly shooting is located in the heart of Pittsburgh’s Squirrel Hill neighborhood, which is home to the city’s most concentrated Jewish community including its kollel, two day schools and several active shuls. It is a residential neighborhood in east Pittsburgh and has been the main center of its Jewish community since the 1920s.

Sunday morning, after the nation was all-too-aware of the horrific shooting, city and law enforcement officials met with some 100 leaders form all sectors of Pittsburgh’s Jewish community.

Rabbi Doniel Schon, associate Rosh Kollel of the Pittsburgh Kollel, was one of the many who attended the meeting.

“They said that there would be more police presence around the schools, and the police chief said that if any institution needs to consult with him, he would be available,” he told Hamodia. “They did their best to assure us.”

The FBI advised that their investigation showed the attacker to be a lone wolf, and while precautions should be taken, there is no reason for the community to be fearful of future attacks in the coming days.

The authorities also advised as to protocols in case of future emergencies, and encouraged community leaders to be proactive in reporting anything that they deem to be suspicious activity. In addition to police and FBI officials, Pittsburgh’s mayor Bill Peduto and Pennsylvania’s governor Tom Wolf also addressed the meeting.

Rabbi Weinberg, who was also present at the meeting, told Hamodia that the schools planned to open on Monday as usual. The school already has robust security, including secured entrances and a security guard, and said that for the coming days an additional guard would be added.

On Sunday afternoon, Rabbi Weinberg was still conferencing with other faculty and consultants as to how to discuss the matter with students the coming day.

“We have been talking to Chai Lifeline’s crisis team. We want to give kids an outlet and the support they need and let them deal with their trauma without creating more,” he said.

After a general assembly, Chumash teachers would discuss the hashkafic issues and deal with the difficult questions that were sure to arise.

Joel Pfeffer, an attorney who lives in Squirrel Hill, told Hamodia that despite the shock and grief, based on what is known about the attack, “there is no more threat of violence today than there is at any time or any place.” Nevertheless, the events, he said, left an indelibly strong impression.

“Obviously, we are grieving for those who lost their lives and loved ones, but on top of that, when it happens in your neighborhood, you realize that this could have happened just as easily in your shul, and if it did, you would have been the same sitting duck,” he said. “It’s very frightening, and certainly makes you think about your life quite seriously.”