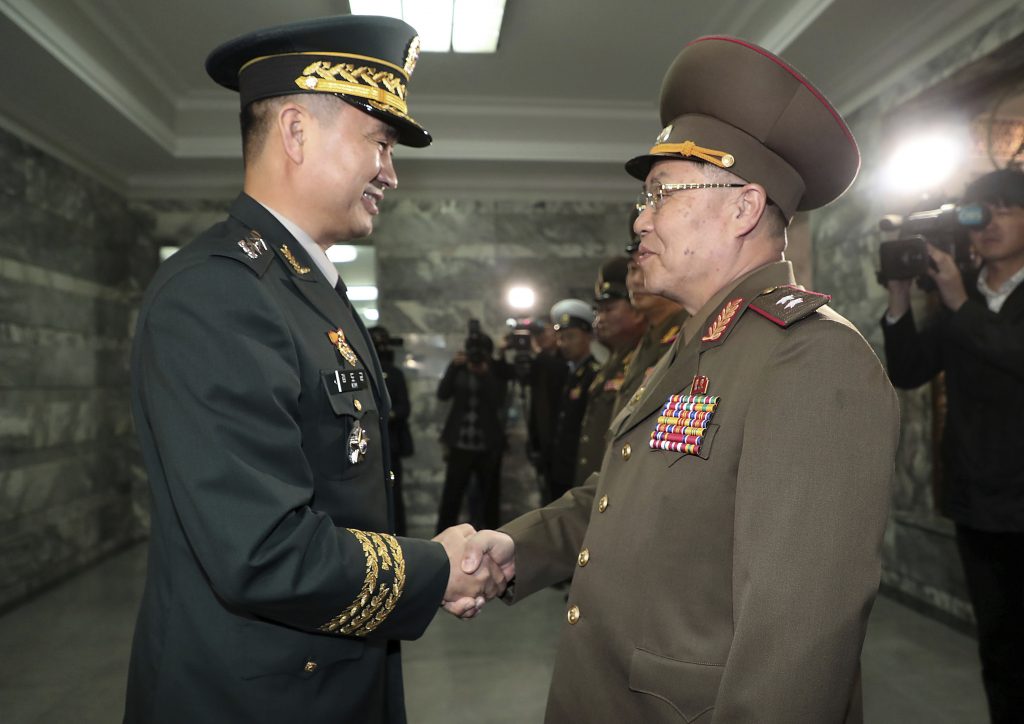 The North and South Korean militaries agreed Friday to completely destroy 11 front-line guard posts by the end of November as they discussed their next steps in implementing a wide-ranging military agreement signed last month to reduce tensions.

They also agreed to conduct a joint survey early next month of a 43-mile-long waterway near their western border where civilian vessels from both countries eventually will be allowed to pass freely, according to a statement released after the general-level talks at the border village of Panmunjom.

The plans to remove the guard posts and jointly use the Han River estuary were among the commitments spelled out in the military agreement reached last month on the sidelines of a summit between North Korean leader Kim Jong Un and South Korean President Moon Jae-in.

Friday’s talks came a day after the Koreas and the U.S.-led U.N. Command completed removing firearms and troops from a jointly controlled area at the border village. The Koreas have also been clearing mines from front-line areas and plan to start their first-ever joint search for remains of soldiers killed during the 1950-53 Korean War in April.

South Korea confirmed on Thursday that its soldiers had found war remains in a different front-line area.

According to the statement provided by South Korea’s Defense Ministry, the Koreas agreed to complete the withdrawal of personnel, firearms and equipment and the destruction of the 11 guard posts by the end of November. They plan to jointly verify the results in December.

In the September agreement, the Koreas pledged to eventually withdraw all guard posts within the heavily armed Demilitarized Zone between them.

The Koreas did not produce a timetable on Friday for setting up a joint military committee to maintain communication and avoid crises and accidental clashes, but agreed it should be established “soon.”

The Koreas also agreed last month to create buffer zones along their land and sea boundaries, as well as a no-fly zone above the border.

Moon has described the military agreement as an important trust-building step that will reduce border tensions and create more space for larger U.S.-led negotiations on denuclearizing North Korea.