Israel Official: Who Allowed Murderer of Rachamim Ze’evi, Hy”d, to Give an Interview?
Israel 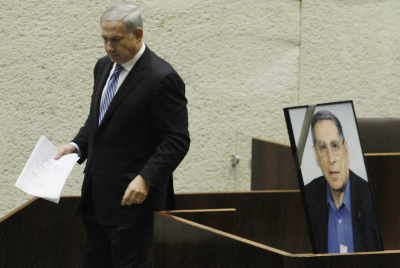 Shomron Council head Yossi Dagan on Wednesday penned an extremely angry letter to Public Security Minister Gilad Erdan, Channel 20 reported, demanding to know how Ahmed Sa’adat – head of the Popular Front terror group and serving several life sentences for his role in the murder of Israeli Tourism Minister Rachamim Ze’evi ,Hy”d – was able to conduct an interview from prison with an Egyptian newspaper. Ze’evi was murdered in 2001 by Arab terrorists at the height of the second intifada. Sa’adat was convicted of leading the plot and taking an active role in the murder.

“It is unfathomable how a murderer – and especially the murderer of a minister in the Israeli government – would be serving a jail sentence that would allow conditions where he would be able to do such a thing,” wrote Dagan. “I hereby request that an inquiry panel be established immediately to determine how this interview could take place, and that all rights be stripped from the murderer of Minister Ze’evi.” As the only way Sa’adat could have given this interview would have been with permission from the Prisons Service, Dagan demanded that Erdan track down who gave that permission, and punish that party appropriately.

In the interview with Egyptian Al-Misri Al-Yum newspaper, Sa’adat, speaking from his prison cell in Rimon Prison, attacked Israel, the Palestinian Authority and the United States. The Gaza riots, called by the terror group “the march of return, impinged on the party surrounding the transfer of the American embassy to Yerushalayim and embarrassed Israel and the United States internationally,” he said. “The Oslo Agreements are a dead body, even though there are some who are great believers in the security arrangements between Israel and the PA.” He called on terror groups Fatah and Hamas to fight against any agreements being developed by the U.S. for a deal between Israel and the PA.

According to Prisons Service rules, prisoners are not allowed to give interviews to the media, unless they get a special permit. In a statement, the Prisons Service said that despite the publicity given to the interview, “during our discussions with the prisoner over the incident he denied any connection to the interview, and he signed a document to that effect. It was made clear to the prisoner that if it turns out that he did conduct the interview, he will be punished to the full extent of the law, including putting him in an isolated environment.”