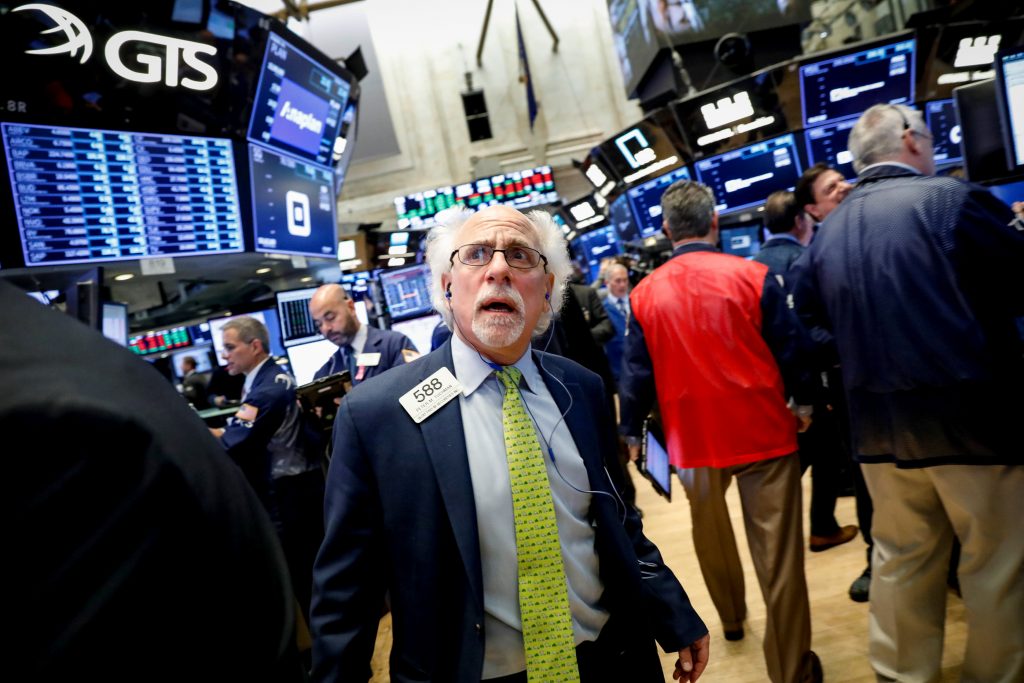 U.S. stocks have mostly recovered from an early loss Wednesday as banks trade higher, canceling out losses for technology companies and retailers. Homebuilders are sinking after the Commerce Department said construction of new homes dropped in September, and retailers are also sharply lower.

IBM tumbled after it announced disappointing quarterly revenue. Netflix rose after reporting big subscriber gains, which relieved investors after the stock slumped over the summer.

Stock trading has been erratic recently, and the market is coming off its biggest gain in more than six months. Earlier this month the benchmark S&P 500 index went through a six-day losing streak that included huge drops last Wednesday and Thursday. Then on Friday the S&P 500 jumped 1.4 percent, its biggest rally in three months, fell on Monday and surged again on Tuesday. Trading had been steady from late June to early October.

CRIBS: U.S. home construction fell 5.3 percent in September, according to the Commerce Department. The pace of homebuilding has slowed since May, and the report is the latest sign that rising mortgage rates may be weighing on the market. Mortgage buyer Freddie Mac says that the average 30-year fixed-rate mortgage jumped to 4.9 percent last week, the highest level since 2011. The combination of higher borrowing costs and rising home values has made home ownership less affordable.

Lennar gave up 3 percent to $42.77, and PulteGroup shed 3.5 percent to $22.79. Home Depot fell 4.4 percent to $185.12, and Lowe’s sank 3.5 percent to $102.26. The home improvement retailers have climbed in recent years as rising home prices pushed many homeowners to renovate their own homes instead of trying to buy new ones. Home Depot was on track for its biggest loss in eight months.

BANK ON IT: Financial companies climbed. Insurer Prudential rose 2.6 percent to $100.39 after regulators lifted the strict government oversight that was imposed on the company after the 2008-09 financial crisis. Prudential was deemed “systemically important” in 2013, which meant it was subject to special restrictions because of its importance to the financial system. It was the last company still carrying that label. Elsewhere, JPMorgan Chase added 1.7 percent to $110.42, and M&T Bank climbed 2.7 percent to $162.96 after its third-quarter report.

THE NEXT EPISODE: Netflix added 3.3 percent to $357.84 after the streaming video company reported surprisingly strong subscriber growth in the third quarter and picked up 7 million users, a total that was above Netflix’s own projections as well as analyst forecasts.

The stock set a record high in early July and tumbled after it reported disappointing subscriber totals and gave a weak third-quarter forecast a few days later. By mid-August the stock had dropped 24 percent, a big setback for one of the biggest winners on Wall Street in the last few years.

The big gain for Netflix meant internet stocks were slightly higher, unlike most other groups of stocks.

RED LIGHT FOR AUTOMAKERS: Goldman Sachs analyst Gungun Verma said the third quarter will be a difficult one for European car companies. She said demand from in China is falling, while production in Europe is down and it’s been weak in Latin America as well. She downgraded Michelin shares. Fiat Chrysler tumbled 4.2 percent to $16.13, and Ferrari dropped 2.3 percent to $118.93. General Motors fell 0.7 percent to $32.11.

CLEARED FOR TAKEOFF: Airlines advanced following United’s quarterly report. The company said it is passing the full impact of higher fuel prices to its customers and it raised its forecast for the rest of the year. Its stock rose 5.7 percent to $88.25, and American gained 2.4 percent to $34.09.

OVERSEAS: Germany’s DAX and the French CAC 40 both fell 0.5 percent. In Britain, the FTSE slipped 0.1 percent.

Japan’s benchmark Nikkei 225 jumped 1.3 percent and the Kospi in South Korea advanced 1 percent. Markets in Hong Kong were closed for a holiday.