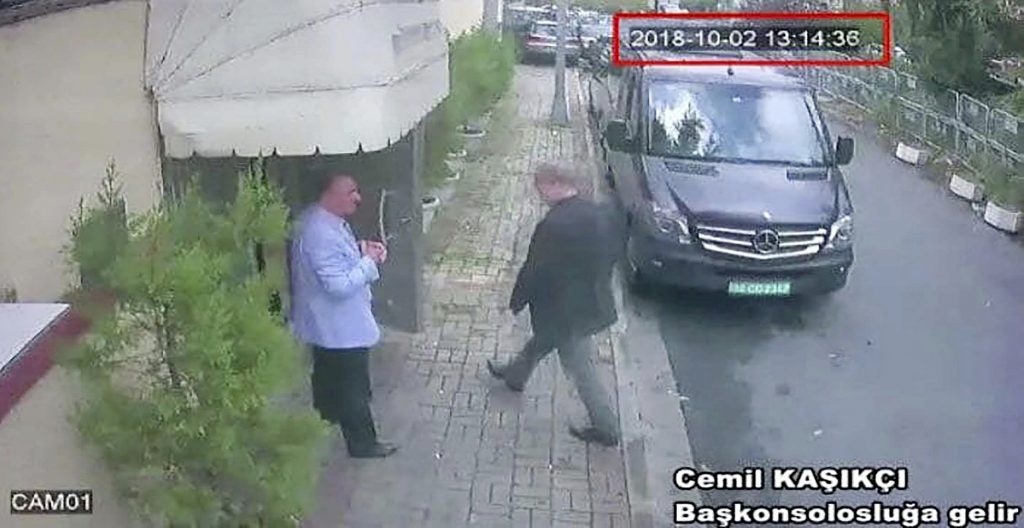 Surveillance footage aired by Turkish media on Wednesday purports to show a team of Saudis arriving in Istanbul the day Jamal Khashoggi went missing, a black van leaving the Saudi Consulate after he entered, and the team checking out and departing the country later that night.

What it doesn’t show is the Saudi journalist ever leaving the building.

Khashoggi, a Washington Post contributor who has written columns critical of Saudi Crown Prince Mohammed bin Salman, went missing on Oct. 2. Turkish officials fear he was killed inside the building. Saudi Arabia has denied the allegations, insisting he left the consulate on his own.

The footage aired Wednesday begins by showing the 3:28 a.m. arrival on Oct. 2 of one of two private Gulfstream jets that Turkish media say were carrying the 15 Saudis, who allegedly flew into and out of Istanbul on the day Khashoggi went missing.

The Sabah newspaper, which is close to President Recep Tayyip Erdogan, identified the team members, including several alleged security officials, and published photos of each of them, apparently taken at passport control. It described them as an “assassination squad” sent to target Khashoggi.

Minutes after their arrival at Ataturk International Airport, two cars can be seen taking the men to Gate E, where eight of them are seen on camera passing through passport control. State broadcaster TRT World, which aired the footage, says the jet was carrying nine men.

Footage time-stamped 4:51 a.m. and 4:53 a.m. shows the men, carrying small carry-on bags, checking into the Movenpick hotel near the consulate. A video caption says seven other men checked in at another nearby hotel at different times.

The video then cuts away to traffic outside the Saudi Consulate in Istanbul’s upscale 4th Levent neighborhood, showing vehicles with green diplomatic license plates.

At 1:14 p.m., Khashoggi is seen walking into the consulate, wearing a dark blazer and light trousers. A man with a light blazer outside the consulate bows slightly as the writer enters the building.

Nearly two hours later, the video shows two vehicles with diplomatic plates — a luxury black sedan and a black Mercedes VITO van— leave through the police barricades outside the consulate.

A map shows the van’s route from the consulate to the nearby official residence of the Saudi consul general, where CCTV footage shows it arriving at 3:07 p.m.

A suited guard speaks into the van for about a minute as an Audi sedan pulls up in front and a passenger exits to enter the residence. A minute later, a man disembarks from the front passenger seat of the van and also enters the building. A flurry of activity is seen outside the residence, with men going in and out, until the van parks in the garage.

At 5:32 p.m., cameras show Khashoggi’s associate, Hatice Cengiz, outside the police barricades of the consulate, speaking into her cellphone. Khashoggi had left his phones with her before entering and told her to wait outside and alert the authorities if he did not return. She says she has not seen him since then.

About two and a half hours later, several men are seen leaving a hotel with their carry-on bags. The video ends with shots of two private jets, saying that six men left at 5:40 p.m. and seven left at 9 p.m.