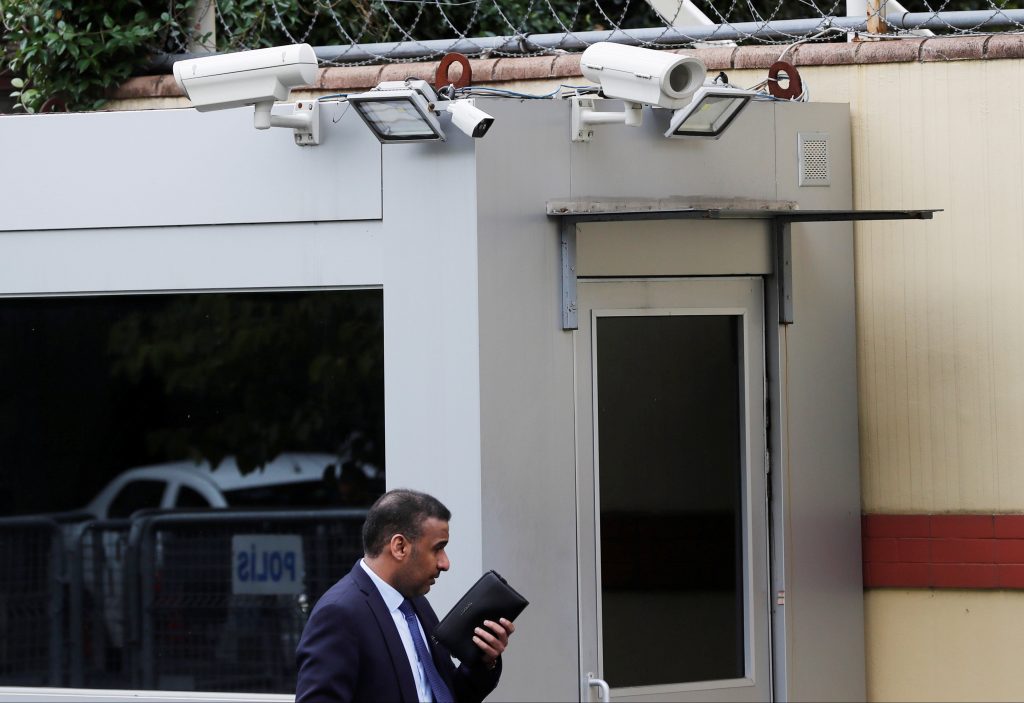 The Washington Post published a surveillance image on Tuesday showing its missing Saudi contributor walking into the Saudi Consulate in Istanbul a week ago, just before he disappeared. Turkish officials have said they fear the columnist was killed there.

Saudi Arabia has called the allegations that it killed writer Jamal Khashoggi as “baseless,” but has offered no evidence over the past seven days to show that he ever left the building.

The image released by the Post bore a date and time stamp, as well as a Turkish caption bearing Khashoggi’s name and that he was arriving at the consulate. The Post said “a person close to the investigation” shared the image with them, without elaborating.

The door Khashoggi walked in through appeared to be the main entrance to the consulate in Istanbul’s 4th Levent neighborhood, a leafy, upscale district near the city’s financial hub that’s home to several other consulates. However, the consulate has other entrances and exits as well, through which Saudi officials insist he left.

It’s unclear which camera the footage came from or who operated it. However, a number of closed-circuit surveillance cameras surround the area. Friends of Khashoggi say Turkish police have taken possession of footage from the neighborhood as part of their investigation.

The Saudis have offered no surveillance footage or evidence to corroborate their claims, nor have Turkish authorities offered proof to show why they believe the columnist was killed there.

“If the story that was told about the murder is true, the Turks must have information and videotape and other documents to back it up,” Fred Hiatt, the Post’s editorial page editor, told The Associated Press. “If the story the Saudis are telling, that he just walked out … after half an hour, if that’s true, they ought to have facts and documents and evidence and tapes to back that up.”

Hiatt added that the “idea of a government luring one of its own citizens onto its own diplomatic property in a foreign country to murder him for the peaceful expression of his views would be unimaginable.”

Khashoggi, 59, went missing while on a visit to the consulate in Istanbul for paperwork to marry in Turkey. He had been living since last year in the United States, in a self-imposed exile, in part due to the rise of the Saudi Crown Prince Mohammed bin Salman, the son of King Salman.

As a contributor to the Post, Khashoggi has written extensively about Saudi Arabia, including criticizing its war in Yemen, its recent diplomatic spat with Canada and its arrest of women’s rights activists after the lifting of a ban on women driving. All those issues have been viewed as being pushed by Prince Mohammed, who similarly has led roundups of activists, businessmen and others in the kingdom.

Turkish President Recep Tayyip Erdogan on Monday urged the Saudis to back up their claim that Khashoggi left the consulate.

“Now when this person enters, whose duty is it to prove that he left or not? It is [the duty] of the consulate officials,” Erdogan said during a visit to Hungary. “Don’t you have cameras and other things? Why don’t you prove it, you have to prove it.”

Turkey summoned the Saudi ambassador on Sunday to request the kingdom’s “full cooperation” in the investigation, a Foreign Ministry official said.

The Turkish private NTV media channel said Ankara asked for permission for its investigators to search the consulate building, but a Foreign Ministry official would not confirm the report. The officials spoke on condition of anonymity because they were not authorized to talk to reporters about the subject.

Ties between Ankara and Riyadh are at a low point over Turkey’s support for Qatar in its year-long dispute with Saudi Arabia and other Gulf nations. Turkey sent food to Qatar and deployed troops at its military base there.

Meanwhile, Saudi Arabia faced increased scrutiny over Khashoggi’s disappearance from officials in America, the kingdom’s longtime ally. Even President Donald Trump, who took his first overseas trip as U.S. president to the kingdom and whose son-in-law Jared Kushner has close ties to Prince Mohammed, said he had concerns.

“I don’t like hearing about it. And hopefully that will sort itself out,” Trump said. “Right now, nobody knows anything about it, but there are some pretty bad stories going around. I do not like it.”