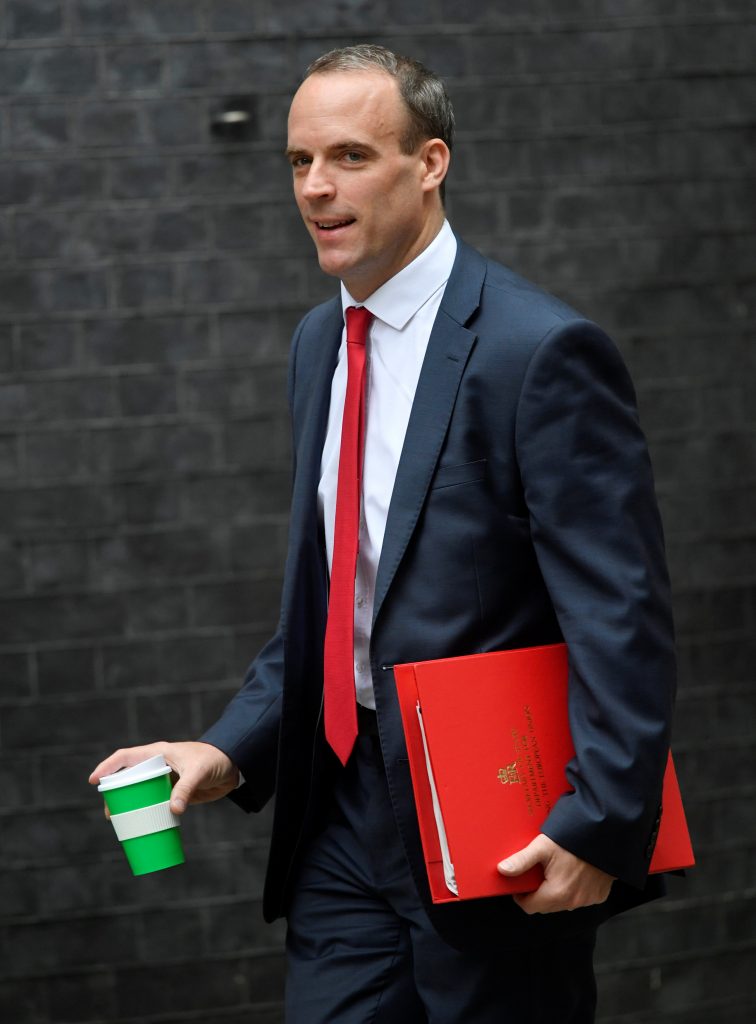 Brexit minister Dominic Raab voiced confidence on Tuesday that Britain and the European Union would make progress on their divorce at a summit next week, but again asked the bloc to meet London “halfway” on the most difficult areas.

Brexit negotiations have stepped up before the summit next Wednesday and Thursday, and the EU has signaled that its officials believe a deal is within grasp. But one of the most difficult obstacles to securing the so-called withdrawal agreement, the Irish border, has yet to be resolved.

With just six months before Britain leaves the EU in its biggest shift in trade and foreign policy in more than 40 years, both sides say they are intensifying talks to try to avoid a “no deal” Brexit that could harm the world’s fifth largest economy.

“The October council next week of course will be an important milestone – we expect that to be a moment where we will make some progress,” Raab told parliament when asked why he was no longer suggesting there could be a deal at the meeting.

“The negotiations were always bound to be tough in the final stretch. That’s all the more reason why we should hold our nerve, stay resolute and focused, and I remain confident we will reach a deal this autumn.”

Britain is keen to move forward on a future relationship, especially after Prime Minister Theresa May’s proposals, already in doubt among many of her governing Conservatives, were widely criticized at an EU summit in Austria last month.

At his latest appearance in parliament, where divisions over how to leave the EU were on display, Raab moved to downplay one of the thorniest parts of the talks – a so-called backstop arrangement to prevent the return of a hard border between the British province of Northern Ireland and EU member Ireland.

He again said that a future partnership that ensured frictionless trade would mean there would be no need for such a backstop, which would only be used if there was no agreement, or if the two sides were not ready to put that deal in place.

“We want to pursue the frictionless trade with the EU that we have now, and that’s what our proposal will deliver. But of course, it requires the EU to meet us halfway,” Raab said.

How to prevent the return of a hard border, which some say could reignite sectarian divisions on the island of Ireland, has become one of the hardest hurdles to clear for both sides.

The small Northern Irish party, which props up PM May’s government again, drew what it described as the “only one red line” in its talks in Brussels on Tuesday, ruling out any checks on trade with the British mainland after Brexit.

“We could not support any arrangement which could give rise to either customs or regulatory barriers within the U.K. internal market,” Arlene Foster, leader of the Democratic Unionist Party, said after meeting EU chief negotiator Michel Barnier.

In parliament, her deputy Nigel Dodds rammed the point home, warning Raab not to “repeat that mistake” from December – when the DUP almost pulled the rug out from an interim accord negotiated by May by scuppering a proposal that would have seen regulatory alignment between the EU and the province.

Raab reiterated that the government would not do anything to compromise the integrity of the United Kingdom, adding that officials had long cautioned that any deal could be pushed back to a special meeting in November.

But one EU diplomat was upbeat, saying the divorce deal, or withdrawal agreement, could be concluded by Monday, and that officials were working on a proposal to avoid Britain having to come up with a separate backstop plan as a possible solution.

For now, the “intense” negotiations are ongoing.