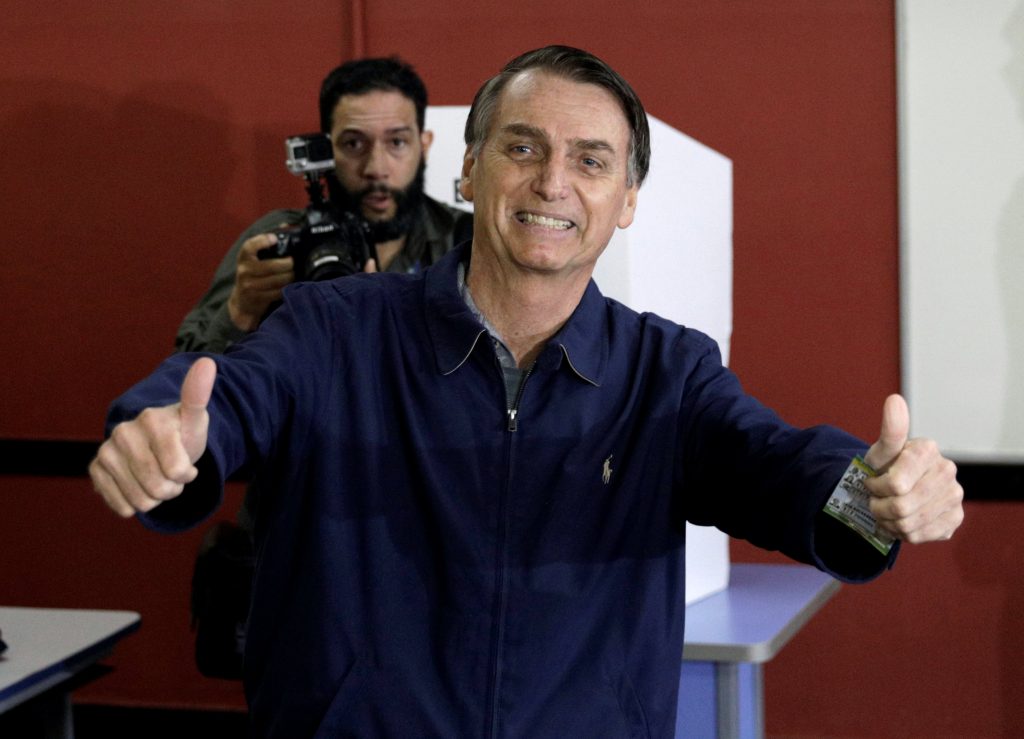 Early exit polls in Brazil on Sunday boosted hopes among supporters of right-wing presidential candidate Jair Bolsonaro that he could outperform recent opinion surveys enough to win a first-round victory.

The fiery lawmaker has surged in opinion polls in the past week, with all major surveys suggesting the race would go to a second-round runoff in what has become a referendum on Bolsonaro, a former army captain who praises dictatorships and vows a brutal crackdown on crime and graft.

Exit polling on the presidential race will be released at 7 p.m. local time (2200 GMT), when voting stations in far western states close.

Bolsonaro, 63, was accompanied by a nurse as he cast his vote on Sunday, a month after a near-fatal stabbing at a campaign rally that required two emergency surgeries. He said he was confident he had the majority of valid votes necessary to clinch the race without a runoff vote on Oct. 28, avoiding a showdown with the leftist Workers Party (PT).

“If G-d is willing, we’ll settle this today,” he told reporters. “We are on an upward trajectory and are confident that the Brazilian people want to distance themselves from socialism.”

Bolsonaro is riding a wave of anger at the establishment over one of the world’s largest political graft schemes and rising crime in the country with most murders in the world. His supporters blame all that on the PT, which ruled Brazil for 13 of the past 15 years, along with reckless economic policies that contributed to Brazil’s worst recession in a generation.

Still, Brazil is split over the danger to democracy posed by Bolsonaro, a long-time congressman who advocates for torture and police violence, praises the country’s 1964-85 military regime and suggested that opponents could only win the race through fraud, although he now vows to respect the electoral process.

Geneis Correa, 46, a business manager in Brasilia, said she voted for Bolsonaro and would support a coup if the PT wins, blaming the party for rampant corruption.

“If they win, it will become Venezuela. People will be hungry, with a currency that is worth nothing,” she said, while leaving a polling station with her daughter. “If the PT is voted into power and there is a military intervention, I would support it.”

Many Brazilians, such as Ruth Pereira Santos, 65, fondly remember the years of rapid growth that Lula oversaw and benefited from his programs lifting millions out of poverty.

“Who could buy a car? For the love of G-d, today I have a car in my garage. This wasn’t accessible before,” said Santos, a caretaker for the elderly.

Two polls published late on Saturday showed Bolsonaro had increased his lead over Haddad in the past two days, taking 36 percent of voter intentions compared with Haddad’s 22 percent. The pair are deadlocked in a likely runoff.

Polling stations opened at 8 a.m. (1100 GMT) and the last will close at 7 p.m. Brasilia time (2200 GMT). Exit polls and official results will start flowing in soon after that via Brazil’s electronic voting system.

Voting was progressing without major incident as of early afternoon. Many Brazilians faced long wait times to vote and a line of more than 500 people snaked outside one polling station in Rio de Janeiro’s Copacabana neighborhood.

Brazil’s 147 million voters will choose the president, all 513 members of the lower house of Congress, two-thirds of the 81-member Senate, plus governors and lawmakers in all 27 states.

Almost two-thirds of the electorate are concentrated in the more populous south and southeast of Brazil where its biggest cities, Sao Paulo and Rio Janeiro, are located and where Bolsonaro holds a commanding lead. A quarter of voters live in the less developed northeast, traditionally a PT stronghold.