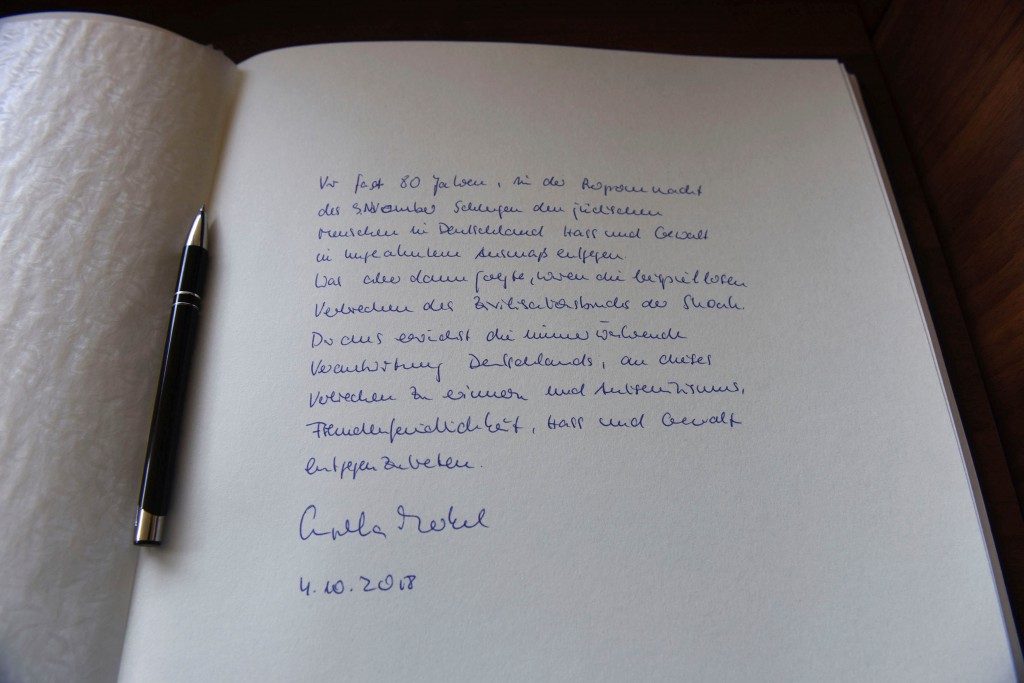 German Chancellor Angela Merkel continued her 24-hour visit to Israel on Thursday with a visit to the Yad Vashem Holocaust Memorial Museum in Yerushalayim, paying homage to the six million Jews killed by the Nazis and said that Germany had a responsibility to confront anti-Semitism, xenophobia, hate and violence,” she said, “and never to forget the Holocaust.

She began a day of meetings between Israeli and German government officials with a visit to Yad Vashem, where she laid a wreath on a stone slab that contains ashes of death camp victims.

“Almost 80 years ago, on the pogrom night of November 9, Jews in Germany faced unimaginable hate and violence. This was followed by the unprecedented crimes against civilization in the form of the Shoah,” Merkel, speaking German and using the Hebrew word for Holocaust, said at Yad Vashem.

Merkel arrived in Israel on Wednesday for a 24-hour visit as part of annual government-to-government talks between German and Israeli ministers.

The chancellor’s conservative party is under pressure from a surge in nationalism and far-right violence in Germany, which has been fueled by anger at her decision to welcome more than a million mostly Muslim asylum seekers in 2015.

Merkel had dinner with Prime Minister Binyamin Netanyahu at his Yerushalayim residence on Wednesday and the two leaders planned further discussions on Thursday that are expected to focus on Iran and the long-stalled peace process with the Palestinians, before holding a news conference.

Germany remains party to a 2015 nuclear pact between Iran and world powers from which President Donald Trump pulled out in May. At the U.N. General Assembly last week, Netanyahu accused Europe of appeasing Iran and said he would prevent Tehran from entrenching in Syria and arming Lebanese Hezbollah terrorists.

On the Israeli-Palestinian conflict, Merkel has said she sees no reasonable alternative to a two-state solution.