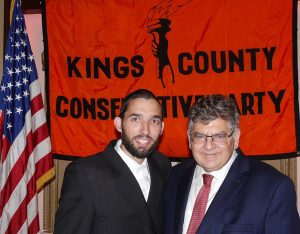 “Simcha Eichenstein is intelligent, forthright and dedicated,” said Conservative Party Chairman Jerry Kassar. “His values closely align with ours and he can be counted on to vote the right way on conservative issues, working to lower taxes fines and unnecessary fees, protecting religious rights, and opposing progressive issues that are detrimental to our families. I am pleased to endorse him.”

Eichenstein, who has served for the last four years on Mayor Bill de Blasio’s legislative affairs team in Albany, thanked Kassar for the backing.

“I am grateful to the Conservative Party’s executive committee and Chairman Kassar for their endorsement,” Eichenstein said. “I’ve known Jerry for a decade and worked with him on many pieces of legislation during the last few years and look forward to working with the Conservative Party in Albany.

“Our community has growing needs,” Simcha added. “To address these needs, we need a seat at the table, so I’m stepping up. I have spent years in Albany, working on hundreds of pieces of legislation and navigating between elected officials and government agencies. I know what it takes to get things done in government and I feel it’s my obligation to take on this role. I hope our community members will send a message by strongly supporting my candidacy as I seek to give our families the best representation imaginable in Albany.”