The B82 Select Bus Service began operating this week, under a plan that aims to speed up the bus line while eliminating some parking spaces and driving lanes on Kings Highway.

Between Bay Parkway and Ocean Avenue, new bus-only lanes will eliminate parking on a total of eight blocks, near subway stations, between 7:00 a.m. and 7:00 p.m., seven days a week. On portions of four blocks, parking lanes will be eliminated permanently in favor of turning lanes. In an effort reduce double-parking by delivery trucks, 28 spaces will be designated during certain hours as truck loading zones. And metered parking will be added along 13 blocks of Kings Highway, to discourage long-term parking on the thoroughfare.

B82 bus passes – which will be randomly inspected by ticket agents aboard the buses – must be purchased from special MetroCard machines prior to boarding the bus, to eliminate the time spent by passengers dipping their MetroCards into the machine on the bus.

The original Select Bus Service plans had called for improving the slow bus service by removing parking lanes on most blocks of Kings Highway during rush hours, in favor of bus-only lanes. The plan, which would have eliminated as many as 169 parking spaces on Kings Highway between Bay Parkway and Ocean Avenue, raised an outcry among elected officials, business owners and residents of an area already notorious for slow traffic and a dearth of parking spaces.

In anticipation of potential loss of parking, elected officials lobbied successfully for added parking elsewhere, including new pedestrian plazas and angled parking on or near Kings Highway.

Under the revised plan, put into effect Monday, the DOT says that a net of 14 full-time parking spots were added, and 88 part-time spots were eliminated.

People who spoke with Hamodia expressed mixed feelings about the new bus plan.

“I think the whole plan is just wrong,” said Rocco Crupi, owner of Kings Highway Bakery, located between West 6th and 7 Streets. “I think that having better double-parking enforcement would be a much better solution to the problem of the stagnant buses on Kings Highway.” Crupi also said he believes that the parking problem on Kings Highway is exacerbated by “illegal curb cuts on the residential streets, which force residents and shoppers to park their vehicles in commercial zones.”

Parking has been eliminated during daytime hours on Kings Highway between West 7th and West 8th Streets, in front of the N Train station, and Crupi fears that may harm his business, because “if people know they can’t park on Kings Highway, they just won’t travel on Kings Highway.”

City Councilman Chaim Deutsch, who represents the portion of Kings Highway between Coney Island Ave. and East 27th Street, succeeded in obtaining new parking in his district, including by having angled parking on East 17th Street between Kings Highway and Ave. P, and by changing the block of Quentin Road between Coney Island and E. 12th Street from a two-way street to a one-way street (westbound) with angled parking. There has been a net gain of 19 parking spaces in Deutsch’s district.

“From its original plan, I did not allow the Department of Transportation and MTA to implement the Select Bus Service plan without understanding and knowing the community,” Deutsch told Hamodia.

Deutsch said he has received “no negative reports” on the new plan from business owners in his district. He said he will “continue to monitor the SBS lanes in my district and see if any tweaks are necessary to ensure that it accommodates, motorists, business owners, commuters and residents,” and that he will continue working with the Department of Transportation to also improve traffic on Avenue P.

Deutsch said he encourages anyone who lives in the affected areas and is concerned about the new plan to contact their elected officials.

State Assemblyman William Colton, who represents Kings Highway’s “West streets,” noted that under the plan, pedestrian plazas and additional parking spaces will be created on Kings Highway near West 11th Street, and that a proposed left-turn ban from Kings Highway onto West 7th and 8th Streets will be put on hold pending further study.

Colton said he commends “the efforts of all the community in achieving changes to the plan to the benefit of riders, residents and neighborhood business owners.”

A Bensonhurst resident, who identified herself only as Chani, said she is upset at the loss of parking spaces for a turning lane on Kings Highway near Bay Parkway.

“It’s nice that they are trying to ease driving, but what about parking?” she said. “Sometimes at night, I spend hours circling the blocks, looking for parking. Killing these spaces will make a bad problem much worse.”

In a statement, the DOT said that the changes were made following “extensive meetings with the community.”

City Councilman Kalman Yeger, who represents Kings Highway between Bay Parkway and Coney Island Ave., slammed the new plan for what he says will be devastating effects for parking and driving in the community.

“DOT’s proposal was dumb when it was proposed; now it is only slightly less dumb,” Yeger told Hamodia. “DOT has installed dangerous street obstructions and 24-hour, 7-day restrictions and bus lanes designed to make it more difficult to live, work and shop in our neighborhood. It makes no sense to restrict parking and driving for 24 hours a day on a bus route that barely operates in the middle of the night, but that is exactly what DOT did. This is perhaps one of the most poorly thought plans I’ve ever seen.” 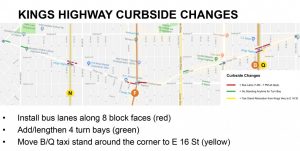 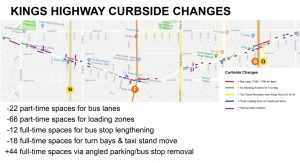 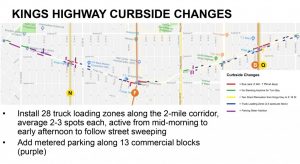