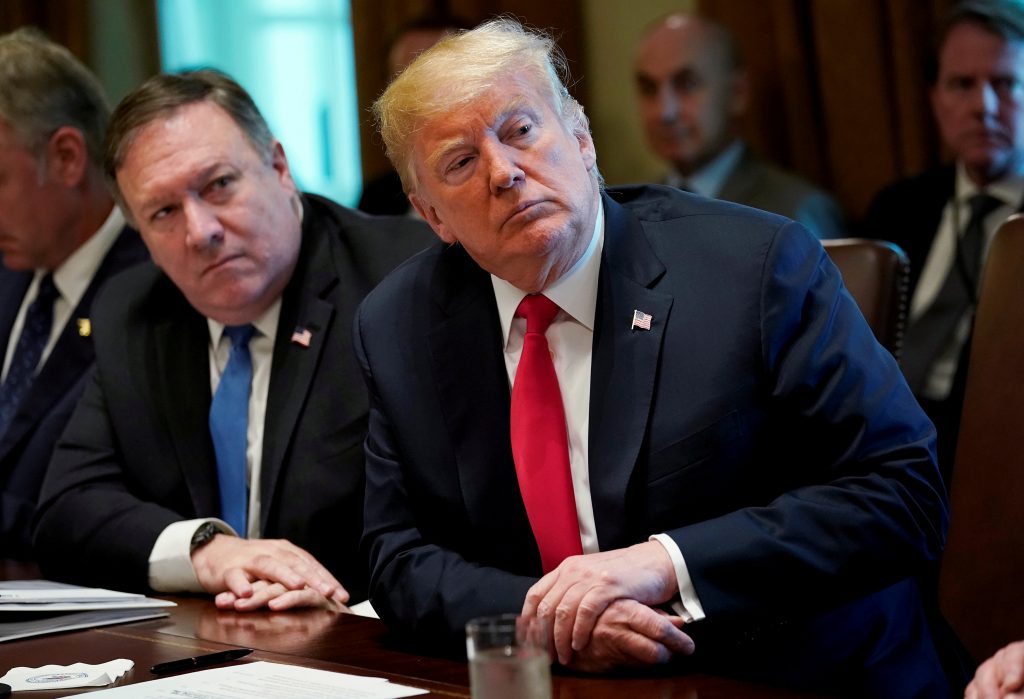 Secretary of State Michael Pompeo isn’t one to dawdle. On his most recent trip abroad he spent just three hours in Pakistan and 24 in India before heading home. Now he’s applying the same impatience to staffing up a State Department hobbled by vacancies and shattered morale.

As he rushes to fill key openings, the former CIA director is trying to rebrand his department with an image more to his liking, and more likely to appeal to his boss, President Donald Trump. Instead of overseeing a corps of cautious and cerebral diplomats, Pompeo boasts on social media that he’s leading the “Department of Swagger.”

Since his confirmation at the end of April, the administration has put forward 57 nominees for ambassadors and senior State Department posts, of whom 28 have been confirmed so far. Overall, 51 State Department nominees are pending in the Senate, according to the department, as Pompeo tries to reverse some of the cuts made under his predecessor, Rex Tillerson.

“Foreign Service officers seem to be breathing a sigh of relief that the building feels like it’s returning to some degree of normalcy,” said Dan Feldman, a former State Department special representative for Afghanistan and Pakistan. “The feeling seems akin to PTSD, where recovery may have started and seems promising, but with the recognition that it will take many years of intense focus and resources to rectify the harm already done by this administration’s evisceration of the building.”

One of Mr. Trump’s most trusted aides, Pompeo has the clout to get many of his choices for vacancies approved at the White House. He has led the on-and-off talks with North Korea and laid out the administration’s confrontational approach to Iran.

In an administration riven by high turnover, Pompeo has worked to reverse the hollowing out that occurred at astonishing speed during Tillerson’s 13-month tenure. In some cases, Pompeo is moving so fast – he says he wants his “team on the field” – that his new hires don’t even have formal titles yet.

So it was with Zalmay Khalilzad, the former ambassador to Iraq and Afghanistan who joined Pompeo on the recent trip to Pakistan even though his security and financial vetting wasn’t yet complete. A reporter asked if Khalilzad, whom Pompeo wants to oversee Afghan reconciliation efforts, was taking the long-standing post of special representative for Afghanistan and Pakistan.

Not all the jobs are top-tier positions in the diplomatic pecking order, but they are filling gaps that had been occupied by acting or deputy officials. Among the nominations for ambassadorial jobs in recent months are posts in Benin, Tajikistan, Azerbaijan, Mozambique, Togo, Ecuador and Gambia.

Pompeo has made very public efforts to appeal to the diplomatic corps that Tillerson disdained, including by appointing career diplomats David Hale and Michael McKinley to senior jobs. McKinley, named a senior counselor, has been installed in the chief of staff’s office next to Pompeo’s.

But critics argue those are exceptions rather than the norm. The American Foreign Service Association said that as of Sept. 11, only one of the department’s 15 assistant secretaries had been drawn from the ranks of currently serving Foreign Service officers.

The talent field available to Pompeo is constrained because many Foreign Service officers with decades of experience left the department under Tillerson’s watch, which ended when Trump dismissed him in a tweet.

Some of Pompeo’s moves have been greeted with skepticism. In a May 15 note to staff titled “Getting Our Team on the Field,” Pompeo lifted a much-despised hiring freeze, while also making clear that staffing would be capped at levels from December 2017. That date kept a squeeze on the department because it was at the height of the freeze, when many offices had already been emptied out.

Pompeo’s choices for staffing include a number of loyalists. Two are friends and former business partners he met at West Point who have followed him through his career. He’s also circumventing the confirmation process by naming special envoys for some of the most pressing foreign policy issues, such as the Syria crisis, Iran and North Korea as well as the Afghanistan post.

Tillerson had won praise in some quarters by paring back the proliferation of such special envoys under the Obama administration.

At times, Pompeo has shown a willingness to buck the White House. He named James Jeffrey as his envoy to Syria even though Jeffrey had committed what’s usually considered a cardinal sin in the administration: He’d signed a letter during the 2016 presidential campaign saying that Trump “lacks the character, values and experience to be president.”

“Shakespeare was the first to use ‘swagger,”‘ the post says. “Gen. Patton had his swagger stick. At @statedept, we’ve got some #swagger too. It’s our confidence in America’s values.”

The #swagger initiative has been met with ridicule on social media and cynicism among some State Department staff, who see it as more public relations than diplomacy.

“You may have gotten eye rolls but people in the field love it,” State Department spokeswoman Heather Nauert said. “He brings it up at every town hall and colleagues cheer. I’ll take a secretary who aims to inspire over one who leaves colleagues feeling disheartened any day.”