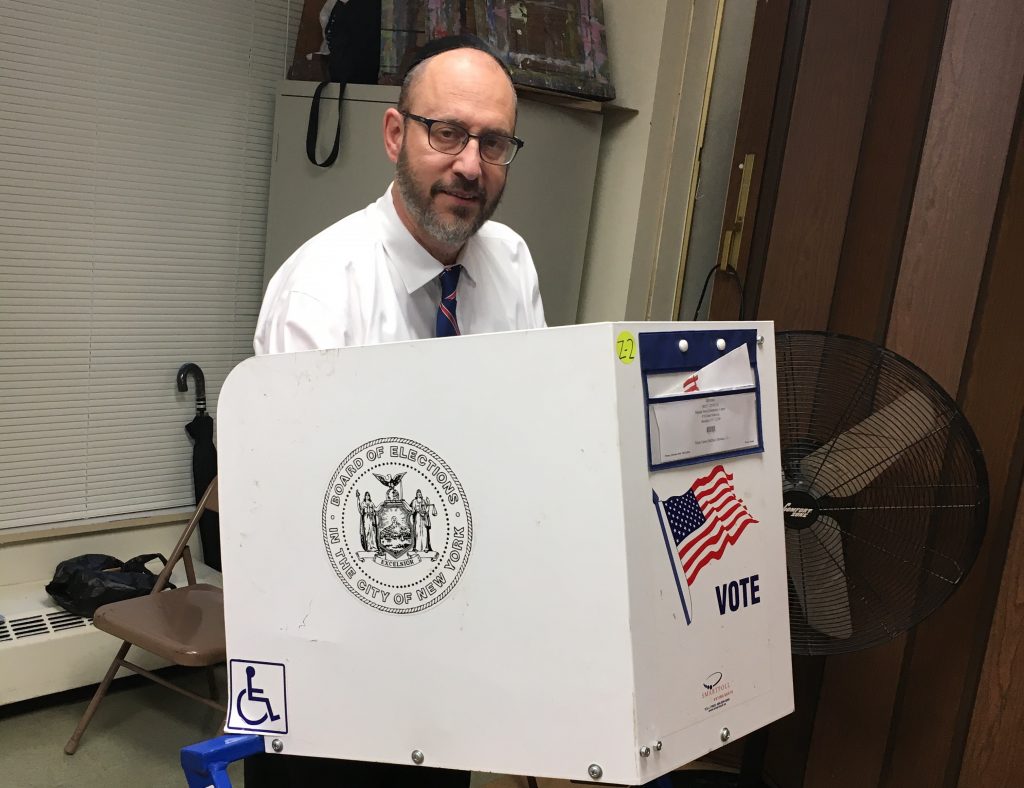 “The people have spoken loud and perfectly clear, they are voting on the issues that matter to them – safety and security, quality of life and education,” Senator Felder said in a statement on Thursday night. “I thank everyone in the 17th Senate District for coming out to vote today; your confidence and support are truly humbling. I will continue serving you and all New Yorkers faithfully.”

Mr. Felder, a democrat who caucuses with the GOP, is widely considered a hero in the Orthodox community for his achievements of behalf of yeshivos, but has been attacked by liberals groups who are unhappy with his conservative political views, his Torah-guided stance on moral issues and his alignment with Republicans.

Mr. Felder, who is known for his unassuming approach to politics, made headlines last April after he won a substantial legislative victory for the orthodox community in changing obscure New York State law regarding education in private and religious schools.

Those seeking to force changes in the ways that yeshivah students receive their education had argued the wording of the old law meant that yeshivah students must spend as many hours a day in secular studies as public-school students do, and must learn each of the numerous subjects taught in public schools. Had this element been successful in their efforts to get state or city governments to enforce this reading of the law, it would have been devastating to the rights of parents whose foremost desire is that their children receive a traditional Torah chinuch.

The new law, carefully crafted by legal experts under the guidance of leading Rebbes, describes the obligatory secular studies subjects in a way that ensures a comprehensive English education, while not contradicting Torah beliefs. It calls for the state to take into account the “entirety of the curriculum,” and whether “the curriculum provides academically rigorous instruction that develops critical thinking skills in the school’s students.”

The New York Times, which endorsed Mr. Morris, referred to this effort, as well as Mr. Felder’s Torah- based views on moral issues, as reasons why to oust Mr. Felder.

The Times endorsement for Mr. Morris also cited Felder’s battle against the plastic bag tax, as well as the fact that Felder already has the support of the Independence and Conservative parties.

Last week, Rabbanim and Dayanim, shlita, of the 10 largest kehillos in Boro Park — who for many years avoided weighing in on political races, and left making political endorsements to askanim — took the unprecedented step of signing a kol korei declaring that it is an “obligation” to vote for State Senator Simcha Felder. In the call, the Rabbanim cited the unprecedented challenges to our ability to educate our children according to our mesorah,

“B’ezras Hashem, we have merited that our friend Reb Simcha Felder, our representative in the [State Senate], has stood strong like a rock fighting for us in every way possible, both in spiritual and material matters. His success is our success, and we all have an obligation according to the Torah to support him in every possible manner,” the Rabbanim wrote.

Mr. Felder was also endorsed by the Patrolmen’s Benevolent Association, the largest union representing NYPD officers, as well as the New York Right to Life committee.

A former city councilman, Felder has been representing the district, which encompasses much of Boro Park and parts of Midwood and Bensonhurst, since 2013.