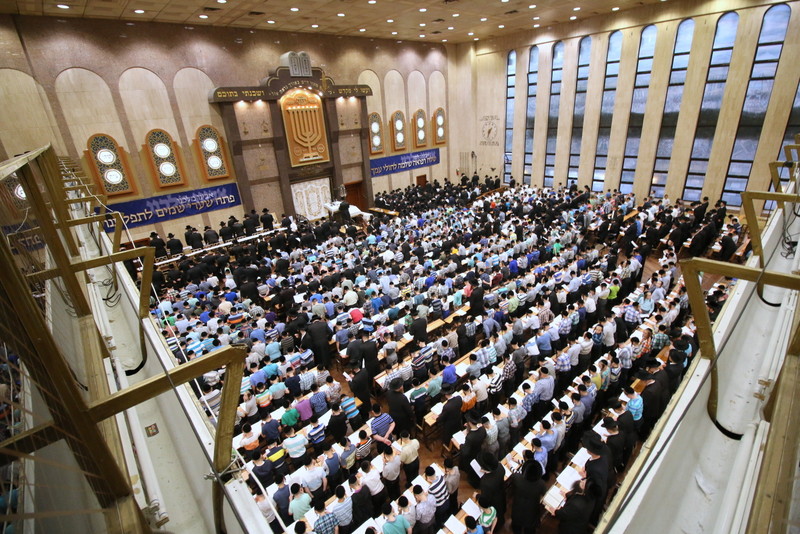 The 25th annual Asifas Tehillim Ha’olami took place on Thursday, 4 Tishrei/September 13, at the Bobover beis medrash on 48th Street and 15th Avenue in Boro Park. In attendance were thousands of children from dozens of New York-area yeshivos as well as many Admorim, Roshei Yeshivah, Rabbanim and askanim. The asifah, held each year during the Aseres Yemei Teshuvah, is held in order to arouse rachamei Shamayim for the numerous cholei Yisrael in our midst and at the same serves as a response to the many other unprecedented difficulties that have rocked Jewish communities worldwide over the last year. It is coordinated by Misaskim, known for its heroic work in providing support and assistance with compassion and professionalism to Yidden confronted by crisis or tragedy, R”l.

“The international Tehillim Asifa was initiated years ago in an effort to let those who are experiencing heartache and those who are sick know that they are not alone, that there are so many others davening for their yeshua,” said Misaskim founder and director Rabbi Yanky Meyer.

The soul-stirring scene in the huge beis medrash, of the tinokos shel beis rabban imploring the Ribbono shel Olam for refuos and yeshuos and rachamei Shamayim for Klal Yisrael was of the sort that is indelibly etched on one’s mind. Pondering the tragedies that have taken place in Eretz Yisrael and indeed globally, one sensed the imperative of utilizing these precious moments to the fullest.

In addition to the vast crowd that filled the beis medrash, thousands more around the world participated via satellite hookup, via the Kol Mevaser telephone line, or following the program online. Myriads of Yidden, wherever they were, paused to recite the Tehillim at the same time as the gathering was taking place. The asifah was also transmitted live to yeshivos, schools and other sites in some 130 communities worldwide, so that tens of thousands of children were all, at once, entreating the Borei Olam to send refuos and yeshuos for Klal Yisrael. In the past, the transmission has included cities such as Baltimore, Cleveland, Chicago, Dallas, Memphis, Milwaukee, Montreal and Toronto, as well as locations in the states of California, Connecticut, Indiana, Florida, Georgia, Massachusetts, Michigan, Minnesota, Missouri, Pennsylvania and Rhode Island. Internationally, it has reached enclaves in London, Manchester, Gateshead and locations in Holland, as well as in Mexico City and sites in Argentina, Chile, Colombia, Costa Rica, Panama and Venezuela.

As a result of the heartful tefillos that were recited at the Asifas Tehillim, and the great hisorrerus that was generated thereby, may Klal Yisrael be gebentshed with a year of health, nachas, hatzlachah, and besuros tovos.