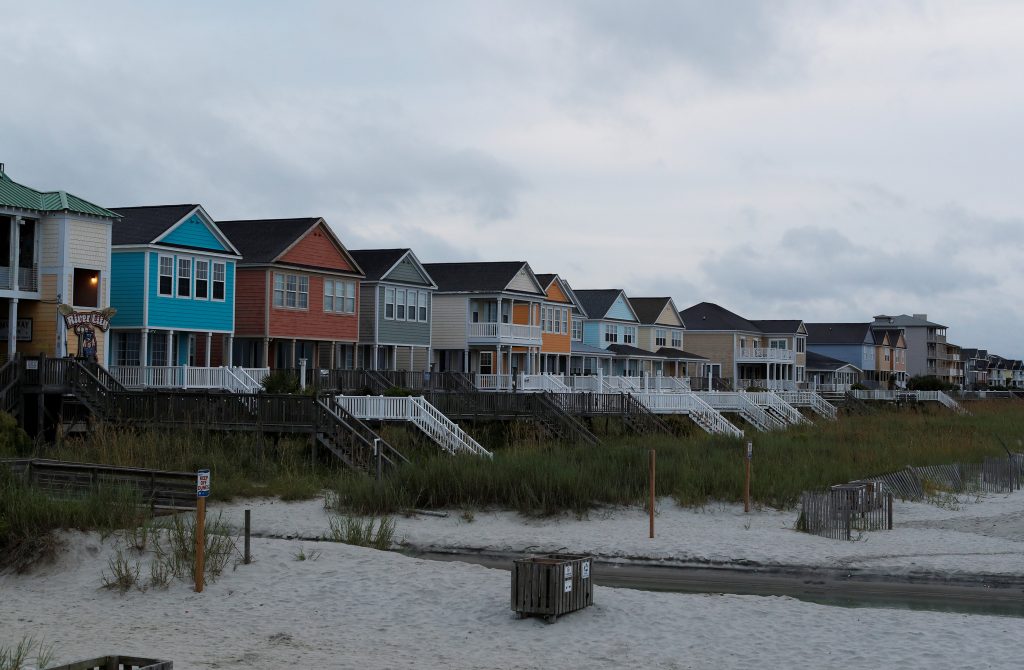 An outsized Hurricane Florence early on Thursday crept closer to the East Coast, packing tropical storm-force winds across hundreds of miles that threaten the region with potentially catastrophic flooding and torrential rain.

The center of Florence, no longer classified as a major hurricane but still posing a grave threat to life and property, is expected to strike North Carolina’s southern coast on Friday, then drift southwest before moving inland on Saturday, according to the National Hurricane Center (NHC) in Miami.

Its maximum sustained winds were clocked on Thursday at 110 miles per hour (161 kph) after it was downgraded to a Category 2 on the five-step Saffir-Simpson scale.

But the NHC also said tropical storm-force winds extended outward up to 195 miles (more than 313 km) from its center, leaving a swath of the U.S. eastern seaboard vulnerable, much of it low-lying and stretching from Georgia north through the Carolinas into Virginia.

“The time to prepare is almost over,” North Carolina Governor Roy Cooper told a morning news conference. “Disaster is at the doorstep and it’s coming in.”

In all, an estimated 10 million people live in areas expected to be placed under a hurricane or storm advisory, according to the U.S. Weather Prediction Center.

Besides inundating the coast with wind-driven storm surges of seawater as high as 13 feet (almost 4 meters) along the Carolina coast, Florence could dump 20 to 30 inches of rain, with up to 40 inches (101.6 cm) in parts of North Carolina, the NHC said.

In Geneva, the World Meteorological Organization forecast the surge could go even higher.

“We expect to see the sea level rise up to six meters (7 feet) and rainfall which amounts to the annual amount of rainfall in one day,” its Secretary-General Petteri Taalas told a news briefing on Thursday.

While a proper early warning system had been activated, it was unusual for hurricanes to strike the Carolinas.

“So they … are not used to such events and the population in the area is growing. There will be for sure economic [losses] and hopefully not too much human losses,” he said.

More than one million people have been ordered to evacuate the coastlines of the Carolinas and Virginia.

In an 11:00 pm EDT advisory, the NHC said: “While Florence has weakened below major hurricane intensity, the wind field of the hurricane continues to grow in size.”

If it stalls over land, downpours and flooding would be especially severe. Heavy rains were forecast to extend into the Appalachians, affecting parts of Alabama, Tennessee, Kentucky and West Virginia.

Tens of thousands of homes and businesses could be flooded in North Carolina alone, Governor Cooper said.

Emergency declarations were in force in North and South Carolina, Virginia, Maryland and the District of Columbia.

The U.S. Coast Guard said it closed the ports of Wilmington and Moorehead City in North Carolina and restricted port operations in Charleston, South Carolina. All seven of North Carolina’s ferry routes were shut down.

Utility officials have warned that widespread power outages are likely and that it could take weeks to restore electricity.

Wilmington, just north of where Florence appeared headed for shore, grew empty and quiet on Wednesday. Officials in New Hanover County, which includes Wilmington, have stockpiled enough food and water for 60,000 people for four days, along with more than 28,000 tarps. Shelters in the city were filling and some people were being bused inland to Raleigh, even though some residents there were told they might have to evacuate because of flooding.