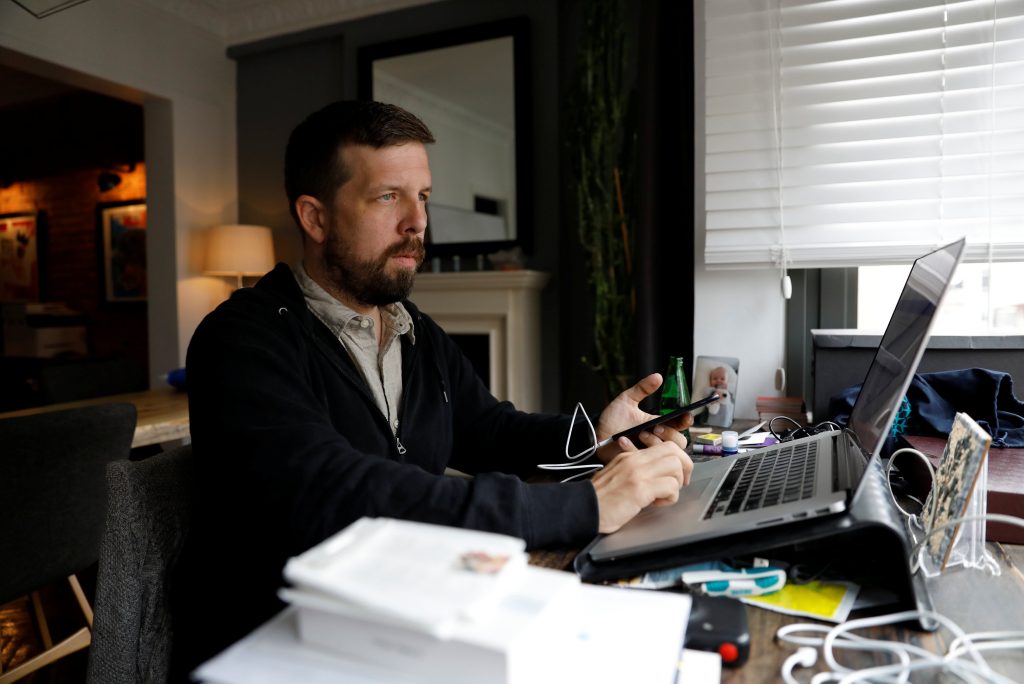 A Russian military aircraft thunders into the sky at 4:47 pm from Russia’s air base at Hmeimim in western Syria, veering to the east.

An observer takes note of all three details, opens a phone app and enters the information into three designated fields.

Fourteen minutes later and 100 kilometers away, Abdel Razzaq sees the aircraft flying over his town of Maaret al-Numan. He opens his own app and types: Maaret al-Numan, Russian military aircraft, headed northeast.

The data is processed by a program, known as Sentry, that estimates the plane’s trajectory and sends a warning, triggering social media messages, Tweets and, most importantly, loud sirens throughout cities in opposition-held Syria.

Air strikes have been a fact of daily life for millions of Syrians living in rebel-held areas, becoming far more intense since Russia joined the war in 2015.

Before Sentry was introduced, the main warning people had of an air strike was when they heard the planes themselves, when it was already too late, said Omayya, 50, who was displaced from Aleppo to its northwestern countryside.

“There was no use for one to do anything. Sometimes we would actually see the barrels as they fell,” she said by Skype, referring to the barrel bombs, oil drums filled with shrapnel and explosives, dropped across rebel areas. “We would watch and see the barrels fall and the children would cry.”

Omayya attended a course run by volunteers about Sentry and how best to survive air strikes. She now knows to open her window, so blast pressure doesn’t shatter the glass and that her bathroom, in the middle of the house, is the best place to hide.

The volunteers taught Omayya’s six grandchildren, three of whose fathers have died, what to do if they are told an air strike may hit their school. Naela, one of the volunteers, said they trained children to duck under desks and curl up in the fetal position if they hear the alarm. If the warning is early enough, teachers can take the children down to basements.

Women have emerged as one of the main targets of the campaign, Naela said: “Women always carry their mobiles with them, so they get the message wherever they are, whether they are at home, in the kitchen, with their neighbor.”

The warning system was founded by two Americans, John Jaeger and his business partner Dave Levin, after Jaeger had held a job working with Syrian civilians for the U.S. State Department.

“I recognized that the biggest threat to peace inside of Syria was the indiscriminate bombing of civilians,” Jaeger explained. “We simply thought that there was more that the international community could and should do to warn civilians in advance of this indiscriminate violence.”

Their company, Hala Systems, says it has received funding from countries including Britain, Canada, the Netherlands and the United States as well as private donors.

“Before, whenever there was bombardment, we wouldn’t have knowledge of a strike until the wounded reach us,” said Yousef, a 23-year old nurse in a field hospital outside Aleppo.

“But now with Sentry, we immediately find out through our mobile that a strike happened. So we know that it’s in this area, where there are civilians. So we know there are wounded for sure.” The hospital can notify doctors, make sure materials are prepped, and wait for the wounded.

Around three million people live in Syria’s last major rebel stronghold in northwest Syria. Half are already displaced, having fled government advances in other parts of Syria.

In preparation for an expected army offensive, civilians have been readying food and digging shelters. Some even improvised gas masks in case of chemical attacks.

Last week, the Syrian government and allied forces resumed air and ground bombardments, although recent days have been relatively quiet, said Abdel Razzaq, who watches for aircraft and enters the information into the Sentry app.

He clicks on the image of a plane to identify what type of aircraft he saw. He chooses the location and what the plane is doing or where it’s headed. This dispatches messages on social media channels sometimes with time-stamped warnings for specific towns and villages.

A former English teacher, Abdel Razzaq has been diligently watching planes since 2011, later joining Sentry as an observer.

“We’re a bunch of guys who are everywhere. Each of us holds a specific district,” he said. “We see the plane, the type of plane, with the naked eye and then send the warning.”

As well as providing warning of attacks that come out of the blue, the system has also helped indicate brief pauses during more sustained attacks, said Hala Systems co-founder Levin. During the offensive on Ghouta, near Damascus, earlier this year, civilians relied on the system to time their brief forays from basements and shelters to get food and water.

“That was a big relief for us, that we were actually having an impact even when it’s raining bombs,” Levin said.