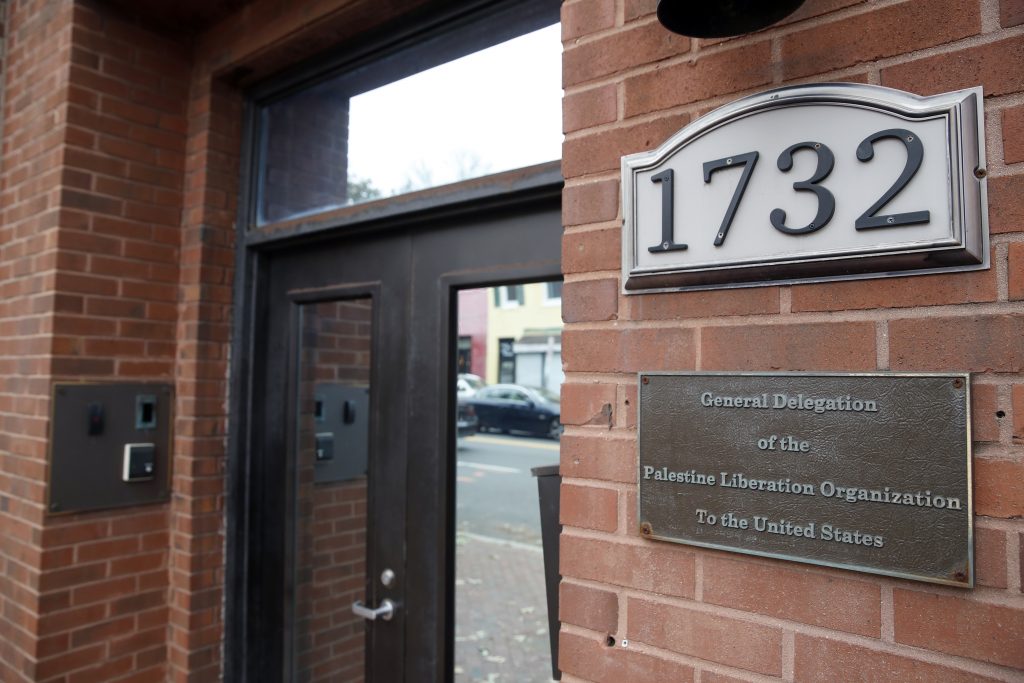 Less than a day after the United States informed the Palestine Liberation Organization that its mission to Washington D.C. would be shut down, members of the staff of the mission said Tuesday night that they had been given a month to leave the U.S. In response, Hussam Zomlot, head of the Washington mission said that the closure and deportation “will not prevent our nation from fulfilling its legitimate aspirations for the establishment of Palestinian state with its capital in Yerushalayim.” The Trump administration, he said, was “blindly executing Israel’s ‘wish list,’ which starts with shutting down Palestinian diplomatic representation in the US.”

The order to close the Washington mission of the PLO was announced in a statement by the State Department Monday. “We have permitted the PLO office to conduct operations that support the objective of achieving a lasting, comprehensive peace between Israelis and the Palestinians since the expiration of a previous waiver in November 2017,” State Department spokesperson Heather Nauert said. “However, the PLO has not taken steps to advance the start of direct and meaningful negotiations with Israel. To the contrary, PLO leadership has condemned a U.S. peace plan they have not yet seen and refused to engage with the U.S. government with respect to peace efforts and otherwise.”

The PLO slammed the decision. Top PLO terror support Hanan Ashrawi said that the move was “extremely cruel and spiteful,” part of an ongoing American “bashing of the Palestinian people by denying them of their rights, giving away their lands and rightful capital of Jerusalem, and defunding UNRWA (the United Nations Relief and Works Agency for Palestine Refugees) and Palestinian institutions, including East Jerusalem hospitals.”

Zomlot said that the PLO would take both Israel and the U.S. to the International Criminal Court, as the U.S. attempted to “protect Israel from unlawful acts, and provide it with full immunity to kill the two state-solution.” But U.S. National Security Advisor John Bolton warned the organization not to try that. “The United States will use any means necessary to protect our citizens and those of our allies from unjust prosecution by this illegitimate court. We will not cooperate with the ICC. We will provide no assistance to the ICC … We will let the ICC die on its own. After all, for all intents and purposes, the ICC is already dead to us,” Bolton said.

Prime Minister Binyamin Netanyahu congratulated the U.S. for shutting the PLO mission. “The U.S. made the correct decision regarding the PLO mission in Washington. Israel supports American actions that are designed to make it clear to the Palestinians that refusing to negotiate and attempts to attack Israel in international forums will not advance peace,” the Prime Minister wrote Tuesday night in a social media post.

United Arab List MK Issawi Frij angrily reacted by saying that “anyone who thinks that sanctions and a one-sided policy will contribute to a renewal of negotiations is either an idiot or a liar. The American one-sidedness only distances negotiations and plays into the hands of those who do not want resolve the dispute.”