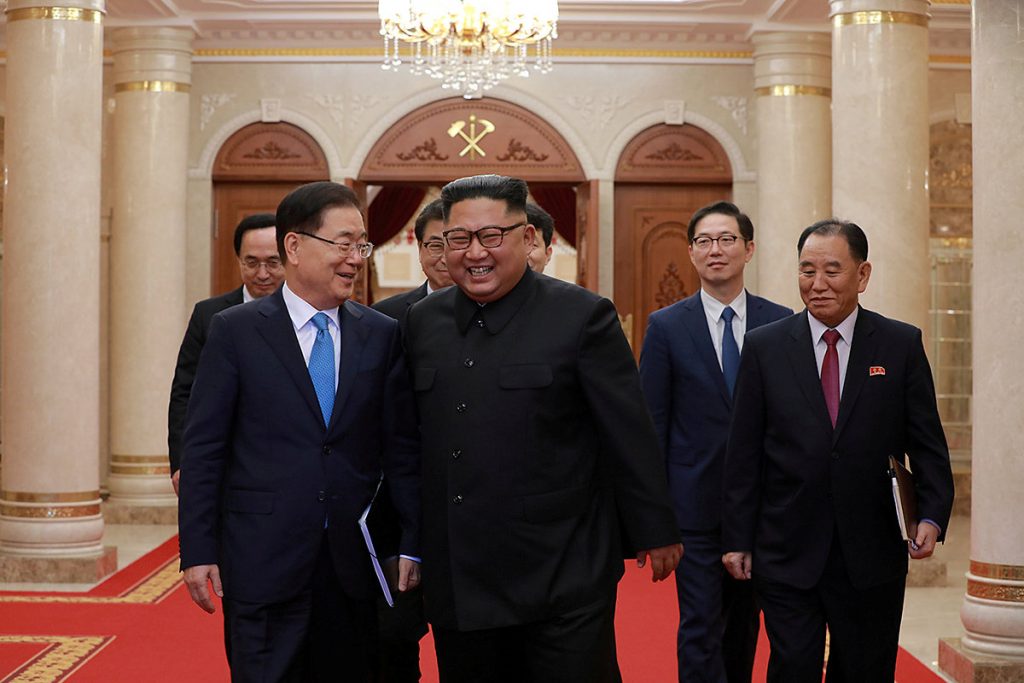 The summit could in turn provide renewed momentum to talks over denuclearization between North Korea and the United States, after Trump canceled a visit to the North by his secretary of state last month, citing a lack of progress.

Kim told South Korean officials his faith in Trump was “unchanged” and he wanted denuclearization and an end to hostile relations with the United States within Trump’s first term in office, ending in early 2021, Chung said.

“He particularly emphasized that he has never said anything negative about President Trump,” Chung said.

North Korea has said in previous, failed talks over the years that it could consider giving up its nuclear program if the United States provided security guarantees by removing its troops from South Korea and withdrawing its so-called nuclear umbrella of deterrence from South Korea and Japan.

U.S. officials involved in negotiations have said North Korea has refused to even start discussions about defining “denuclearization” or other key terms such as “verifiable” and “irreversible,” and have insisted the United States must first agree to take simultaneous steps to reduce economic pressure.

Chung said Kim had stressed the need for the United States to reciprocate North Korea’s initial moves, which have included dismantling a nuclear test site and a missile engine facility.

The U.S. Embassy in Seoul on Thursday said it had no information to share on the matter.

North Korea’s official KCNA news agency said Kim told Chung and other envoys that it was his “fixed stand” to turn the Korean Peninsula into “the cradle of peace without nuclear weapons and free from nuclear threat.”

Chung said Kim showed “frustration over the doubt raised by some parts of the international community about his willingness to denuclearize, and asked us to convey his message to the United States.”

“He said he would appreciate that such good faith is accepted with good faith,” Chung said. “He expressed his strong will to carry out more proactive measures toward denuclearization if action is taken in response to the North’s preemptive steps.”

The two Koreas also plan to open an inter-Korean liaison office before the third summit in the North’s border city of Kaesong, staffed by officials from both sides to facilitate consultation, Chung said.

Kim and Trump held a landmark summit in Singapore in June, in which they agreed to work toward complete denuclearization. But negotiations have made little headway, while signs North Korea has maintained work on its weapons have emerged.

In this year’s talks, North Korea and the United States have been at odds over whether denuclearization or declaring an end to the 1950-53 Korean War should come first.

The war ended with an armistice, not a peace treaty, meaning U.S.-led U.N. forces, including South Korea, are technically still at war with the North.

North Korea has long sought a formal end to the war but U.S. officials have said an end-of-war declaration could weaken North Korea’s incentive for denuclearization, and raise questions about the 28,500 U.S. troops stationed in South Korea, a legacy of the three-year war.

U.S. officials also say they have already made concessions, such as halting joint military exercises with South Korea.

U.S. Secretary of State Mike Pompeo visited Pyongyang in July, after which North Korea accused him of making “unilateral and gangster-like demands for denuclearization” while showing little interest in ending the war.

The United States, however, has said it is committed to building a peace mechanism if NorthKorea denuclearizes.

“Looks like Kim is trying to wash away worries that talks could stall or fail, knowing well that Washington is losing patience,” said Koh Yu-hwan, a professor of North Korean Studies at Dongguk University in Seoul.

“Kim also made it clear that he needs some kind of proof Trump has abandoned the U.S.’s hostile policy before moving toward denuclearization. Kim is trying to prove his sincerity.”