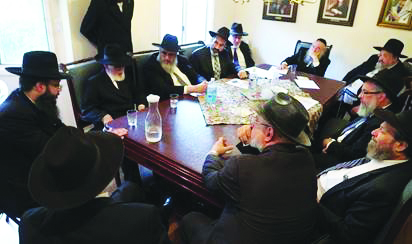 In an effort to seek innovative approaches to the ongoing attempts to stave off the threats of assimilation that have affected a large percentage of the Bukharian Jewish community, which is mostly based in Queens, an asifas Rabbanim was held last week to raise awareness of the challenges faced and to spread a feeling of shared responsibility among Ashkenazi Rabbanim and Roshei Yeshivah in the area.

At the center of the crisis faced by the community’s leaders is that a lack of funds for tuitions, combined with a lack of understanding of the terrible impact of the cultural secular influence, has led to thousands of Bukharian parents placing their children in public schools over the last years. The phenomenon has led many of the highly traditional-minded enclave’s youth away from their heritage, which was proudly preserved even through decades of Communist rule in their native lands.

Bukharian Rabbanim, under the leadership of the community’s Chief Rabbi, Harav Yitzchak Yisraeli, and the outreach organization Chazaq have invested increasing efforts in addressing the situation, but wanted to let other Queens-based Rabbanim know about the problem and how much more remains to be done.

“Hundreds of kids have come through Chazaq and over 480 have been placed in yeshivot, but we have 10,000 more in public schools that we want to reach,” Rabbi Ilan Meirov, director of Chazaq, told Hamodia. “I wanted to make it clear that we do not have 10 years to work on this crisis. Many of these kids are still connected to Judaism, but we are at a fork in the road and if we do not come up with big plans soon, we will lose them.”

Bukharian Jews have had a presence in America since the 1970s. With the fall of the Soviet Union the community increased manifold, with its strongest concentration in the central Queens neighborhoods of Forest Hills, Rego Park, and Kew Garden Hills. A significant portion of Bukharian families did send their children to Jewish schools.

Yet a far larger group of the relatively recent immigrant population, most of whom were traditional but not strictly shomer Torah umitzvos, took advantage of government-funded public education. Like many Jewish groups that came before them, much of the community does not understand the dangers of America’s “melting pot” culture, and its potential impact on their own identities.

The meeting was held in the home of Harav Noach Isaac Oelbaum, shlita, Mara d’Asra of Khal Nachlas Yitzchok, who has been involved in the matter for some time. The gathering was organized at the request of the Kaliver Rebbe, shlita, by several of his grandchildren. For many years the Rebbe made bi-annual visits to Chazaq’s afterschool programs and even now, despite his illness, continues to play a major role in galvanizing outside support for efforts to strengthen Yiddishkeit in the community.

Following an introduction to the challenges at hand, the Rabbanim and Roshei Yeshivah who serve as leaders in the area’s well-established Ashkenazi community discussed at length and in great detail practical suggestions that can be implemented in the near future.

Presently, Chazaq focuses largely on after-school programs for both boys and girls in public school, working to use the time to foster a positive Jewish environment and to infuse their clientele with as much knowledge of Torah and love for Yiddishkeit as possible. One suggestion discussed was a plan to expand Chazaq’s efforts to model a program run by the Eretz Yisrael-based organization Lev L’Achim to pursue greater engagement with families.

Several of the Roshei Yeshivah readily volunteered talmidim in their yeshivos to serve as chavrusos or mentors for public school boys.

Hundreds of children have been transferred to an array of mosdos, the largest number to Be’er Hagolah Institutions in Brooklyn. In many cases, tuition has been paid for or heavily supplemented by the Nechomas Yisroel organization. Another lively topic of conversation focused on ways to strengthen the existing mosdos in order to attract a broader parent body to consider sending their children to those schools.

The most ambitious topic broached was the hope to build new mosdos in Queens that would cater to the unique needs of the segment of the community that by and large is presently in public schools. Such a plan would obviously require a massive fundraising effort not only within the Bukharian community itself, but from diverse corners of Klal Yisrael.

A related option that was discussed was the possibility of establishing a branch of Be’er Hagolah in Queens, as the long commute to Brooklyn was cited as a major impediment in the efforts to convince more Queens parents whose children are currently in public school to send to mosdos.

At the asifah’s conclusion, the 15 Rabbanim in attendance signed a kol korei pledging their readiness to lend whatever help possible to aid in the cause.