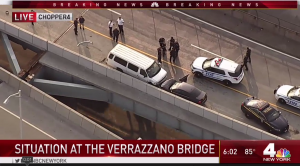 The upper-level lanes at the Verrazano-Narrows Bridge were closed for two hours Monday evening, after a criminal suspect being pursued by cops drove in the wrong direction and crashed into a police vehicle.

The incident began when a van wanted in connection with burglaries entered the Staten Island-bound upper-level roadway of bridge around 5:30 p.m., according to the NYPD and MTA. MTA Police attempted to pull over the van. The van driver crashed into the car in front of him – possibly intentionally – and then made a U-Turn and began driving in the opposite direction (toward Brooklyn), against traffic. A police vehicle tried pulling over to the shoulder, but the van driver appeared to intentionally crash into the police car, injuring two officers.

The van driver was apprehended. The officers are in serious but stable condition.

Daily traffic on the bridge exceeds 200,000 vehicles, according to the NYC Department of Transportation.