National Was a Great White Shark to Blame for Cape Cod Attack?
National 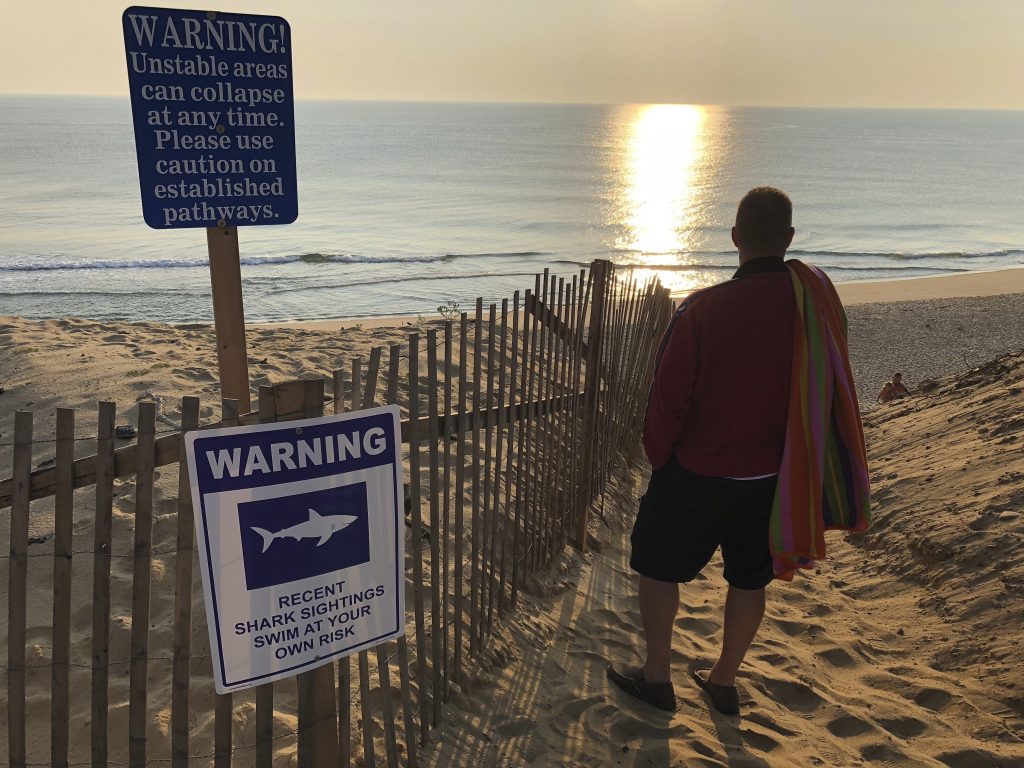 On a windswept dune overlooking the Atlantic Ocean, hastily erected signs warned Cape Cod beachgoers to stay out of the water on Thursday, a day after a New York man became the first person to be attacked by a shark off the coast of Massachusetts since 2012.

The victim, William Lytton of Scarsdale, New York, was airlifted to a hospital in Boston, where he was being treated for deep puncture wounds to his torso and leg after staggering to shore, dazed and bleeding. The hospital said Lytton, 61, remained in serious condition, and his family asked for privacy.

Police said Lytton was bitten by a shark while wading about 30 yards off Long Nook Beach in Truro, on the outer coastline of the peninsula. The area is part of the Cape Cod National Seashore, a major summer tourism destination.

Massachusetts’ foremost shark expert, Greg Skomal, planned to speak with Lytton and examine his wounds to see if he was bitten by a great white shark. Numerous great white sightings have been reported in the area, which is frequented by seals, and witnesses reported seeing seals in the water just before the attack.

Truro was the site of the last shark attack in Massachusetts, in July 2012, when a Colorado man on nearby Ballston Beach suffered a bite that required 47 stitches. The state’s last shark attack fatality was in 1936.

“They’re there, just as much as the sunrise and sunset. We’re just guests,” vacationer Steven McFadden, of Plattsburgh, New York, said as he watched waves break on the deserted beach at dawn. “I’ll cool my feet off sometimes, but I’m not going to swim. I don’t want to be that guy.”

Town officials said the beach would be closed to swimming at least through Friday, and they put up signs that read: “Danger, No Swimming.” Town manager Rae Ann Palmer said several shark sightings were reported Thursday, but she did not have details.

The area is a feeding ground for seals, which draw sharks, and authorities regularly caution people to avoid the water whenever seals are present.

“We hope people understand sharks are part of the ecosystem on Cape Cod,” said Brian Carlstrom, superintendent of the Cape Cod National Seashore.

Despite the public’s primal fear of sharks, the odds of being killed by one are roughly 1 in 3.7 million, according to the National Aquarium in Baltimore.

An organization that studies sharks, the Atlantic White Shark Conservancy, said shark encounters in which people are injured are as “terrifying as they are rare.”

“While we still don’t know all of the details of this particular bite, sharks are not known to target people specifically and when they do bite people, it’s usually a case of mistaken identity,” the group said in a statement. “Sharks ‘test the waters’ with their teeth, much like we use our hands. It’s how they determine if what they encounter is prey or something to avoid.”

Andrea Worthington, of Schenectady, New York, and her husband, Rob Olberg, walked their dogs on Long Nook Beach at sunrise on Thursday but heeded the warnings not to swim.

They said they were swimming about 20 yards offshore just a few hours before the attack and later were chilled to realize they’d shared the waters with a shark.

“We saw the seals and came in,” Worthington said. “It’s never a good time to be in the water.”