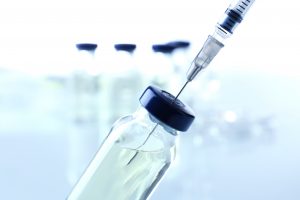 New research has shown that a common childhood vaccination given to expectant mothers does not put their children at any increased risk of autism.

A Kaiser Permanente study published Monday in the journal Pediatrics found no association between the prenatal Tdap (for tetanus, diphtheria and pertussis, also known as whooping cough) vaccine and autism spectrum disorder when looking at tens of thousands of children in the hospital system. It is the latest in a long line of studies showing that there is no link between vaccines and autism. Despite the abundant scientific evidence, a persistent conspiracy theory has misled some parents into fearing vaccines.

“If any woman had any hesitancy, she can be reassured,” Tracy Becerra-Culqui, lead author and postdoctoral research fellow with Kaiser Permanente Southern California’s Department of Research and Evaluation, told The Washington Post. When not vaccinated, she said, “the risk of getting whooping cough is greater than any perceived risk of harm to the baby, so it should be a no-brainer to accept the vaccine.”

“Any woman who is [expectant] may be concerned with any exposure inside or outside the health-care system,” Becerra-Culqui said, noting that some women who are encouraged by their doctors to get the Tdap vaccine may worry about it causing harm to their unborn babies. “We wanted to get ahead of any concern – the prevailing concern being, ‘Will my child develop some disease like autism?’ ”

Childhood vaccinations – and vaccines in general – have been a controversial topic since 1998, when conspiracy theorist Andrew Wakefield published a fraudulent research paper purporting a connection between the MMR (measles, mumps and rubella) vaccine and autism. Though the British doctor and his research have been repeatedly discredited, the idea triggered inextinguishable worry among some parents who still opt not to get their children immunized.

As The Washington Post previously reported, although most parents in the United States vaccinate their children, “vaccine skepticism and outright refusal in recent years have led to places where there are communities of undervaccinated children who are more susceptible to disease and pose health risks to the broader public.”

Using electronic medical records from Kaiser Permanente Southern California hospitals, the researchers studied more than 80,000 children from a four-year period to determine whether there were more instances of autism among those whose mothers had been vaccinated during pregnancy.

The research showed that 569 (or 1.5 percent) children whose mothers received the vaccination were later diagnosed with autism, compared with 772 (or 1.8 percent) children whose mothers did not get the shot. Becerra-Culqui said in an email that after taking into account other differences between the vaccinated and unvaccinated groups, “there was no association found between the Tdap vaccine received during pregnancy and autism in children.”

Medical experts agree that vaccinations are needed – even before children are born – to protect the infants.

Texas pediatrician Jason Terk said that because tetanus, diphtheria and pertussis can be such serious illnesses for infants, it is recommended that expectant women get the Tdap vaccine so that they can develop antibodies and pass them on “to protect the babies in those critical first few months.”

The CDC recommends that children receive their first Tdap vaccine at 2 months of age, but Terk said the children are not completely covered until after the second dose, which they are supposed to receive at 4 months of age. By giving the vaccine to expectant women, doctors hope to protect babies during those first few months – when they are unvaccinated and most vulnerable to disease.

Saad Omer, a professor of global health, epidemiology and pediatrics at Emory University, said the study was comprehensive and well-designed.

The results, he said, are “not surprising” but “very reassuring.”