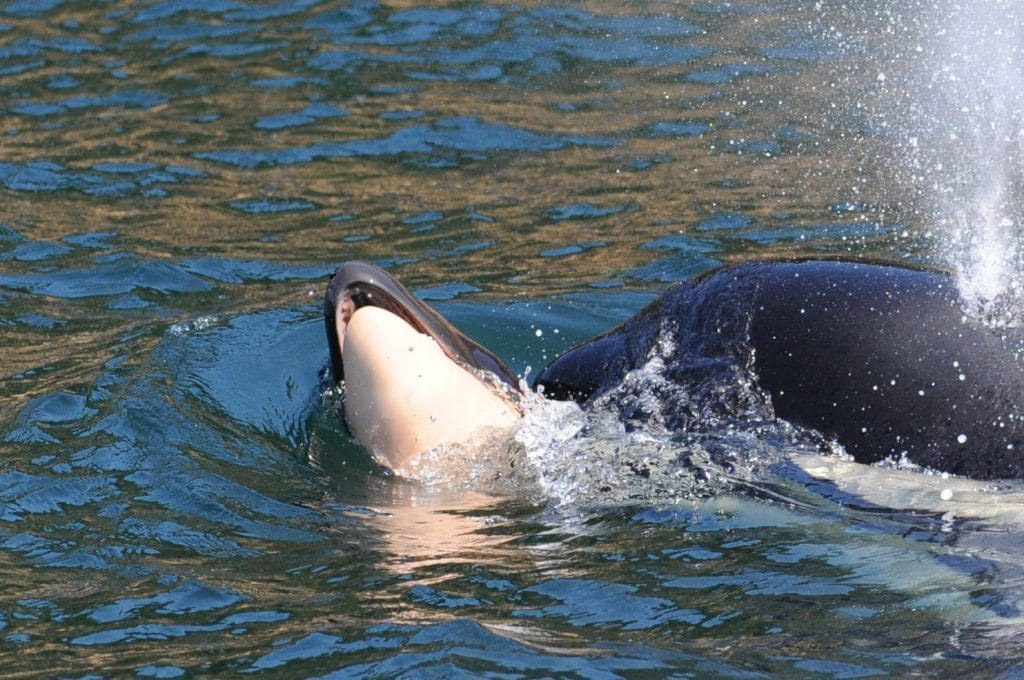 A grieving orca whale has released the body of her dead calf after carrying it for at least 17 days through the Pacific Ocean in an unprecedented act of mourning, according to researchers.

On Saturday, Tahlequah, as the mother has come to be called, was observed swimming without the body of her calf, according to Center for Whale Research Founder Ken Balcomb.

“Her tour of grief is now over and her behavior is remarkably frisky,” read an update on the research center’s website.

The center said whale-watchers near Vancouver, British Columbia, had reported seeing Tahlequah without her calf’s body last week, but Saturday was the first time researchers were able to confirm those reports.

Tahlequah’s mourning had astonished and devastated much of the world.

The orca gave birth on July 25 in what should have been a happy milestone for her long-suffering clan.

As Allyson Chiu wrote for The Washington Post, the pod of killer whales that roams between Vancouver and San Juan Island has dwindled to 75 members over the decades. The cause is no mystery: Humans have netted up the whales’ salmon, driven ships through their hunting lanes and polluted their water, to the point that researchers fear Tahlequah’s generation may be the last of her family.

The 400-pound, orange-tinted baby that was born that morning was the first live birth in the pod since 2015, Chiu wrote. It lived about half an hour.

People love to anthropomorphize animals, often fallaciously. But studies have found that orcas really do possess high levels of intelligence and empathy, and emotions that may not be totally alien to our own.

So, when Tahlequah did not let her emaciated calf sink to the bottom of the Pacific, but rather balanced it on her head and pushed it along as she followed her pod, researchers thought they understood what was happening.

“You cannot interpret it any other way,” Deborah Giles, a killer whale biologist with the University of Washington, told Chiu. “This is an animal that is grieving for its dead baby, and she doesn’t want to let it go. She’s not ready.”

That was the beginning of a long funeral procession. “The hours turned into days,” Chiu wrote two days after the death. “And on Thursday she was still seen pushing her baby to the water’s surface.”

And still the next day, and through the weekend, and into the next week and next month.

The act itself was not unprecedented, but researchers said it was rare to see a mother carry her dead for so long. It couldn’t have been easy for her. Tahlequah’s pod travels dozens of miles in a day, Chiu wrote, and she pushed her baby’s hundreds of pounds every inch of the way. She was forever picking up the body as it sank, hoisting it out of the water to take a breath, and repeating.

Researchers with the Canadian and U.S. governments and other organizations tracked her all the while, the Seattle Times wrote. They hoped to capture the calf once Tahlequah finally let go, and discover why it had died, as nearly all the babies in this pod seemed to.

But Tahlequah would not let go. Eventually, researchers stopped calling what they were witnessing “rare” and began using the word “unprecedented.”

And the phenomenon was no longer of purely scientific interest.

People wrote poems about Tahlequah and drew pictures. People lost sleep thinking about the whale. A scientist cried thinking of her. Tahlequah inspired politicians and essayists and a sense of interspecies kinship in some mothers who had also lost children.

And still, Tahlequah carried her child. The world’s interest in her feat finally grew to encompass her whole family.

Last week, the Times wrote, biologists and government officials began working on a plan to save the youngest living member of Talhequah’s pod, a three-year-old orca that appears to be on the brink of starvation. They are tracking the young whale, Scarlet, in an attempt to feed her antibiotic-laced salmon.

In that sense, maybe, Tahlequah’s doomed calf did bring new hope to the pod, which had previously swum and struggled in near-anonymity.

At the same time, the mother’s obsession had become gravely concerning to researchers. They worried that the effort of pushing her calf, for about 1,000 miles, would make Tahlequah weak and keep her from finding enough food. Fortunately, that doesn’t appear to be the case.

The Center for Whale Research said Tahlequah “vigorously chased a school of salmon with her pod-mates” when researchers spotted her on Saturday.