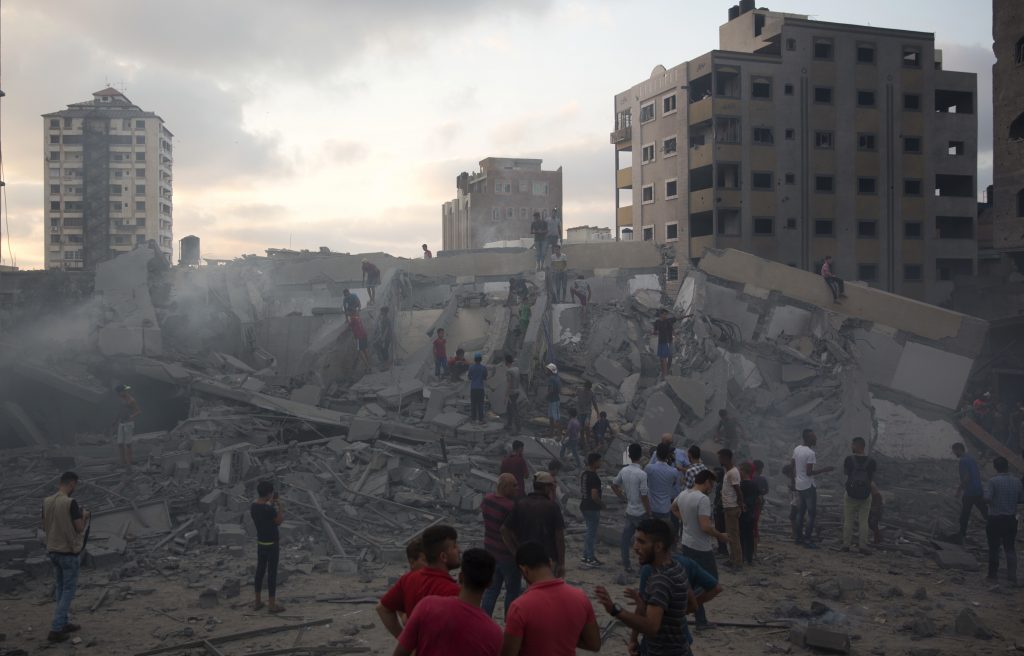 Israel’s prime minister convened his Security Cabinet late Thursday to plot a response to a new burst of violence with Gaza terrorists, ordering the army to take unspecified “strong action” as the military reinforced units along the border ahead of a possible escalation.

Fighting showed few signs of slowing. Late on Thursday, the Israeli military flattened a well-known cultural center in a crowded Gaza City neighborhood, saying it was a Hamas military base, as terrorists fired rockets toward Israel throughout the evening.

In all, Israel carried out dozens of airstrikes during the day, killing at least three Palestinians, while Palestinian terrorists fired scores of rockets into Israel, wounding seven people.

The flare-up came as Egypt continued efforts to broker a long-term cease-fire between the two sides.

Israel’s Channel 10 TV said Prime Minister Benjamin Netanyahu delayed the meeting of his Security Cabinet by two hours to allow the Egyptians to press forward with their work.

After a four-hour meeting, the Cabinet issued a short statement, saying it had directed the army “to continue taking strong action against the terrorist elements.”

It did not elaborate. But shortly before the meeting, Netanyahu and his defense minister, Avigdor Lieberman, met with top military officials to discuss their options.

An Israeli official, speaking on condition of anonymity because he was discussing closed consultations, said Netanyahu instructed the army to prepare for “every possibility.”

Lt. Col. Jonathan Conricus, a military spokesman, said Israel had “ground troops that are ready to deploy. We are reinforcing the southern command and Gaza division.” He wouldn’t comment on Israeli media reports of troops preparing for a possible ground operation.

Israel and Hamas have fought three wars since Hamas seized control of Gaza in 2007. Despite the animosity, the enemies have signaled — through their contacts with Egypt — that they want to avoid another war.

Hamas is demanding the lifting of an Israeli-Egyptian border blockade that has devastated Gaza’s economy, while Israel wants an end to rocket fire, as well as recent border protests and launches of incendiary balloons, and the return of the remains of two dead soldiers and two Israelis believed to be alive and held by Hamas.

A Palestinian rocket struck the southern city of Beersheba late in the afternoon, landing in an open area. It was the first time a rocket had hit the city since the 2014 war.

Shortly after, an Israeli airstrike flattened the five-story cultural center in the Shati refugee camp, a crowded neighborhood of Gaza City. The airstrike set off a powerful explosion and sent a huge plume of black smoke into the air, causing crowds to scream in panic. Medical officials said at least seven bystanders were wounded.

The building is home to a popular theater and exhibits plays and other shows on a daily basis. An Egyptian-Palestinian cultural society also has an office in the building.

“The deliberate targeting of a cultural center with airstrikes and destruction … is a barbaric act,” said Hazem Qassem, a Hamas spokesman. He said the destruction of the Egyptian cultural office was “an Israeli attempt to sabotage” the Egyptian cease-fire efforts.

The Israeli military said the building served as a Palestinian military installation. Hamas’ Interior Ministry — including its secret police — has offices in an adjacent site, but those offices were not hit in the airstrike.

The Israeli military said it struck some 200 targets throughout Gaza, including Hamas command posts and weapons production and storage facilities. It said a similar number of rockets and mortars were fired at Israel.

In southern Israel, two Thai laborers were among the seven wounded by rocket or mortar fire, and rockets damaged buildings in the cities of Sderot and Ashkelon. The military said it intercepted some 30 rockets, while most of the others landed in open areas.

At the United Nations, Israel’s ambassador, Danny Danon, urged the secretary-general and U.N. Security Council to condemn Hamas terrorists for what he called “the unprovoked terrorist attack” on southern Israel.

Nickolay Mladenov, the U.N. Mideast envoy, said he was “deeply alarmed” and appealed for calm. He said the situation “can rapidly deteriorate with devastating consequences for all people.”

Tension along the Israel-Gaza border has escalated since late March, when Hamas launched what would become regular mass protests along Israel’s perimeter fence with Gaza. The protests have been aimed in part at trying to break the blockade.

Israel and Hamas have engaged in several bouts of fighting this month. The latest round erupted Tuesday, when the Israeli military struck a Hamas military post in Gaza after it said militants fired on Israeli troops on the border. Hamas said two of its fighters were killed after taking part in a gunfire parade inside a terrorists camp.

The incident occurred while a group of senior Hamas leaders from abroad were visiting Gaza to discuss the ceases-fire efforts with local leaders.

A top Hamas official told The Associated Press that the group waited for the delegation to leave Gaza before responding with rocket fire late Wednesday.