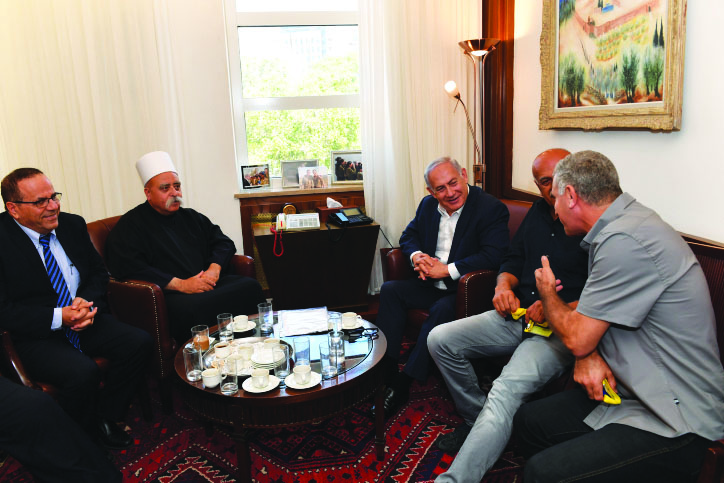 Four years ago, Zidan Saif, a Druze traffic policeman, gave his life to stop a terrorist rampage at Kehillas Bnei Torah in Har Nof, Yerushalayim, that claimed the lives of five mispallelim.

Had Saif not confronted the terrorists, who were armed with a gun, axes and meat cleavers, the carnage could chalilah have been much worse.

Not surprisingly, the Rav of Bnei Torah, Hagaon Harav Yitzchak Mordechai Rubin, attended Saif’s funeral in the northern town of Yanuh-Jat, as the head of a chareidi delegation, and eulogized him. “We came from Yerushalayim, from the place of the massacre … simply to be with you and to cry with you,” he said. “Zidan showed courage. He was the first at the battle. He stood like a wall, with his body, with his head, in order to save the souls of those in the synagogue. The loss of Zidan is our loss as well as that of the Druze community, and we feel, especially at times like this, a kinship with the Druze community. The devotion and the determination of Zidan should be an example to us all — to the Druze and to the Jews.”

Saif, 30, who left behind a 4-month-old daughter, was not the first member of his family to make the supreme sacrifice for Jews or the Jewish state. In 1982, his uncle, an Israeli soldier, was killed in the Lebanon War.

The Druze community of Israel, which numbers around 150,000, has a long and distinguished history of serving side-by-side with the Jewish people in defense of Israel. During Operation Protective Edge in 2014, Col. Ghassan Alian, the commander of the Golani Brigade, was wounded in action, but refused to remain in the hospital, saying that his soldiers needed him.

Imad Fares, who once commanded the Givati Brigade, rose to the rank of brigadier general.

The blood pact goes back many years. As Sheikh Moafak Tarif, the spiritual leader of Israel’s Druze, told Hamodia last week, “My grandfather, Sheikh Amin Tarif, was the first to foresee the establishment of the State of Israel as a Jewish state. … He instructed the community to enlist in the IDF, and the vast majority of our youth indeed served in the army, and some of them in very senior positions.”

It is for this reason that Jews in Israel, whether from the political right or left, are concerned that the Nation-State Law has hurt the feelings of the Druze community, leaving many with the sense that they are now second-class citizens. It is precisely because of the Druze allegiance to Israel as a Jewish state – unlike many Israeli Arabs, including Knesset members, who identify themselves as “Palestinians” – that their concerns are being taken seriously.

Prime Minister Binyamin Netanyahu met with Druze leaders for three days last week, resulting in agreements that are long overdue. For instance, the government promised to build the first new Druze village since the founding of the state, to improve the infrastructure in existing villages and to stop issuing costly fines for illegal building.

Trickier was finding a way to guarantee the Druze equal rights in a Basic Law, Israel’s version of a constitution. The prime minister was adamant not to insert such an amendment to the Nation-State Law, for fear that it will be used by the High Court to turn Israel into a state of all its citizens, but did agree to include it as an amendment to another Basic Law.

According to some reports, the elders among the Druze are willing to accept the agreements reached last week with the prime minister, but the younger generation is refusing to do so.

In any case, it imperative that the rights of Druze be protected and their feelings respected. Hakaras hatov, exhibiting gratitude to all those who have shown us kindness, is a fundamental obligation, and how much more so towards those who gave their lives to save Jews.