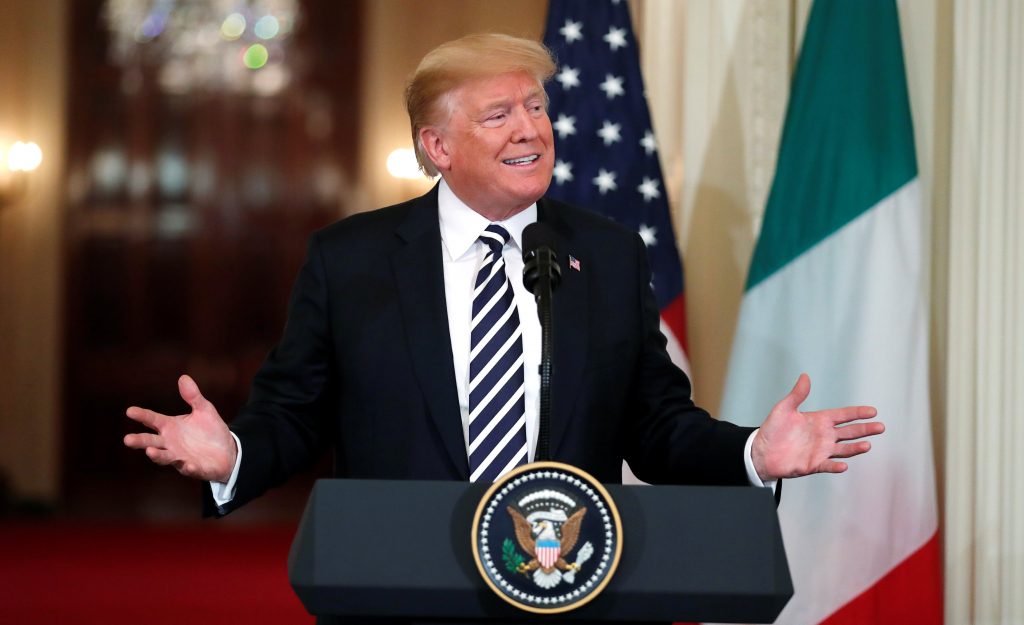 Senior Iranian officials on Tuesday rejected U.S. President Donald Trump’s offer of talks without preconditions as worthless and “a humiliation” after he acted to reimpose sanctions on Tehran following his withdrawal from a landmark nuclear deal.

Separately, Iranian President Hassan Rouhani said Trump’s repudiation of the accord reached in 2015 was “illegal” and Iran would not easily yield to Washington’s renewed campaign to strangle Iran’s vital oil exports.

In May, Trump pulled the United States out of the multilateral deal concluded before he took office, denouncing it as one-sided in Iran’s favor. On Monday, he declared that he would be willing to meet Rouhani without preconditions to discuss how to improve relations.

Iran’s foreign ministry spokesman said Trump’s offer to negotiate with Tehran contradicted his actions as Washington has imposed sanctions on Iran and put pressure on other countries to avoid business with the Islamic Republic.

“Sanctions and pressures are the exact opposite of dialogue,” Bahram Qasemi was quoted as saying by Fars news agency on Tuesday.

“How can Trump prove to the Iranian nation that his comments of last night reflect a true intention for negotiation and have not been expressed for populist gains?” he added.

The head of the powerful Revolutionary Guards equally dismissed Trump’s tentative offer, saying the Islamic Republic was not North Korea.

“Mr Trump! Iran is not North Korea to accept your offer for a meeting,” Guards commander Major General Mohammad Ali Jafari was quoted as saying by Fars News agency. “Even U.S. presidents after you will not see that day.”

The head of Iran’s Strategic Council on Foreign Relations said on Tuesday, Tehran saw no value in Trump’s offer, made only a week after he warned Iran it risked dire consequences few had ever suffered in history if it made threats against Washington.

“Based on our bad experiences in negotiations with America and based on U.S. officials’ violation of their commitments, it is natural that we see no value in his proposal,” Kamal Kharrazi was quoted as saying by the semi-official Fars news agency.

“Trump should first make up for his withdrawal from the nuclear deal and show that he respects his predecessors’ commitments and international law,” added Kharrazi, a former foreign minister.

Kharrazi said Trump likes “meeting for the sake of meeting” and was not concerned about its results.

The Strategic Council on Foreign Relations was set up by Iranian Supreme Leader Ayatollah Ali Khamenei to help formulate long-term policies for the Islamic Republic.

Trump’s move to force Iran into fresh negotiations has for now reunited Iranian hardliners who opposed the nuclear deal and pragmatists like Rouhani who championed it to end the Islamic Republic’s economically crippling stand-off with Western powers.

Ali Motahari, the deputy speaker of Iran’s parliament, who is seen as part of Iran’s moderate camp, said that to negotiate with Trump now “would be a humiliation.”

“If Trump had not withdrawn from the nuclear deal and not imposed [new] sanctions on Iran, there would be no problem with negotiations with America,” he told state news agency IRNA.

Iran’s interior minister chimed in that Tehran did not trust Washington as a negotiating partner. “The United States is not trustworthy. How can we trust this country when it withdraws unilaterally from the nuclear deal?” Abdolreza Rahmani Fazli was quoted as saying by the semi-official Fars news agency.

A senior aide to Rouhani said the only way back to talks was for Washington to return to the nuclear agreement.

“Respecting the Iranian nation’s rights, reducing hostilities and returning to the nuclear deal are steps that can be taken to pave the bumpy road of talks between Iran and America,” Hamid Aboutalebi tweeted on Tuesday.

Under the 2015 deal, the fruit of Rouhani’s efforts to ease Iran’s international isolation to help revive its economy, Iran curbed its shadowy nuclear program and won relief from U.N. and Western sanctions in return.

Trump condemned the deal in part because it did not cover Iran’s ballistic missile program and involvement in Middle East conflicts. He reactivated U.S. sanctions, the most all-encompassing measures against Iran, and warned countries to stop importing Iranian oil from Nov. 4 or risk U.S. penalties.

The three major European signatories to the 2015 deal have been searching for ways to salvage it but cautioned Tehran that they may not be able to persuade many major investors not to bolt from business with Iran to avoid U.S. punishment.

Rouhani said during a meeting with Britain’s ambassador on Tuesday that after what he called the “illegal” U.S. withdrawal from the nuclear deal, “the ball is in Europe’s court now”.

He added, “The Islamic Republic has never sought tension in the region and does not want any trouble in global waterways, but it will not easily give up on its rights to export oil.”

Rouhani and some senior military commanders have said Iran could disrupt oil shipments from Gulf states through the Strait of Hormuz if Washington tries to choke off Iranian oil exports.

Iran’s OPEC governor, Hossein Kazempour Ardebili, told Reuters on Tuesday that Trump was mistaken if he expected Saudi Arabia and other oil producers to compensate for losses of Iranian oil caused by U.S. sanctions.

“It seems President Trump has been taken hostage by Saudi Arabia and a few producers when they claimed they can replace 2.5 million barrels per day of Iranian exports, encouraging him to take action against Iran,” Ardebili said.

“Now they and Russia sell more oil and more expensively. Not even from their incremental production but their stocks.”

He said oil prices, which Trump has been pressuring the Organization of the Petroleum Exporting Countries to bring down by raising output, will instead rise unless the United States grants waivers to buyers of Iranian crude.

Iran’s currency plumbed new depths on Monday, dropping past 120,000 rials to the dollar, but Trump’s expressed willingness to negotiate with Tehran sparked a minor recovery on Tuesday to 110,000 rials on the unofficial market.

Iranian Vice-President Eshagh Jahangiri said the government and the central bank would unveil a new economic plan by the end of this week to tackle the U.S. sanctions and the rial’s fall.

Videos on social media showed hundreds of people rallying in Isfahan in central Iran, and Karaj near Tehran, in protest at high prices caused in part by the rial’s devaluation under heightened U.S. pressure.