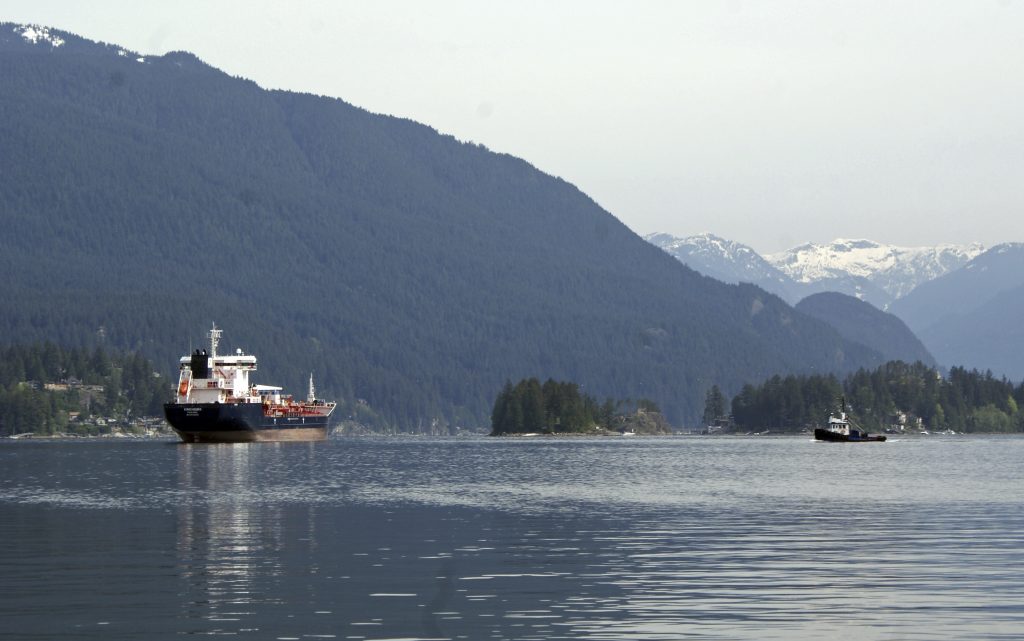 With President Donald Trump’s trade war against Canada showing no sign of abating, the work on the Trans Mountain pipeline expansion that’s starting next month may seem Heaven-sent for a nation striving to reduce dependence on its southern neighbor.

After all, the Canadian federal government’s main rationale for saving the project from abandonment with a $3.5 billion purchase from Kinder Morgan was the promise that the bigger line will help the nation’s producers ship more crude to fast-growing importers like China and India. But lost in the debate is the fact that very few of the 300,000 barrels of oil and refined fuels a day the existing Trans Mountain line ships from Alberta to Canada’s Pacific coast are making their way to Asia.

In fact, in the past year, only two of the 48 tankers that entered the Westridge Dock or Parkland Burnaby terminals have departed directly for Asia, according to data compiled by Bloomberg. One of those vessels left for South Korea in April, and the other departed for China earlier this month. Both were carrying an estimated 550,000 barrels of crude.

The result is that essentially all of Canada’s crude oil exports for the first four months of the year have gone to the U.S., according to National Energy Board statistics. Some doubt that the Trans Mountain expansion will change that trend.

The idea that Trans Mountain will help Canadian producers get better prices in Asia is “fiction,” said Jeff Rubin, an independent economist who previously served as chief economist of CIBC World Markets. “The highest prices for heavy oil are in the U.S. Gulf, and that’s because that’s where the greatest amount of heavy-oil refinery capacity is.”

Refiners in Asia have typically paid lower prices for crude grades comparable to Canadian heavy oil, such as Mexican Maya, rather than higher ones, he said. Prices for that blend are about $8 a barrel less in Asia than on the Gulf Coast, he said.

Last year, about 54 percent of the volume carried on Trans Mountain was crude oil shipped to Washington State refineries via the Puget Sound System, according to the pipeline’s website. About 42 percent of the line’s crude and refined products made it all the way to the Burnaby storage terminal and the Westridge marine station. The remainder ended up at a refined-products storage facility in Kamloops, B.C.

Kinder Morgan Canada expects that the majority of the capacity that the expansion is adding to the line will be for exports from Westridge destined for markets including Washington, California and Asia. However, actual destinations will depend on market conditions, the company said.

“This project came about in response to requests from oil shippers to help them reach new markets in the Pacific Rim,” the company said in an emailed statement. “The limited capacity of the system today prohibits shippers from establishing reliable access to trade consistently with these markets.”

For now, Trans Mountain crude is going mostly to U.S. West Coast refiners that have grown increasingly reliant on imports amid declining production from Alaska and California. U.S. West Coast refineries, with 2.8 million barrels a day of capacity, received 454 million barrels of crude from outside the U.S. last year from countries including Saudi Arabia, Canada and Colombia, the most in Energy Department data reaching back to 1981.

But once the Trans Mountain expansion is complete, and an additional 590,000 barrels of oil are flowing to the coast, more oil will be available for export, said Kevin Birn, a director on the North American crude oil markets team at IHS Markit. Right now only about 25,000 barrels of oil a day from Trans Mountain is left over and available for export, he said.

“It doesn’t matter if the terminal exists, if you don’t have enough crude going through it, you can’t load a vessel,” Birn said.

Asian refiners are likely to be interested in obtaining some of that supply, said Dinara Millington, vice president of research at the Canadian Energy Research Institute. China has refining capacity for the heavy crudes produced by Canada and Saudi Arabia, as well as its own domestic production.

The appeal of Canadian crude is that the oil sands produce predictable, steady supplies with little geopolitical risk and reservoirs that are forecast to last around 50 years, she said.

“They want to diversify their suppliers,” Millington said. “They don’t want to depend only on Middle Eastern countries.”

In Kinder Morgan’s 2013 application for Trans Mountain, the company estimated that exports to California would garner a $3 to $4 a barrel premium to exports to the Gulf Coast and shipments to Asia would garner prices $2 per barrel higher. The company’s base case for the project forecasts shipments of 354,000 barrels of crude a day being shipped to Asia, according to a report conducted for the application by IHS.

For its part, Canada’s oil industry is agnostic on where it sells its products, said Tim McMillan, chief executive officer of the Canadian Association of Petroleum Producers, the industry’s largest trade group.

“You have access to global markets, and whether it’s bought by an American refinery, a Chinese refinery, a Japanese or a Korean refiner doesn’t matter as much as you’re getting world price,” McMillan said. “Where it ultimately goes is where the market places the highest value on it.”