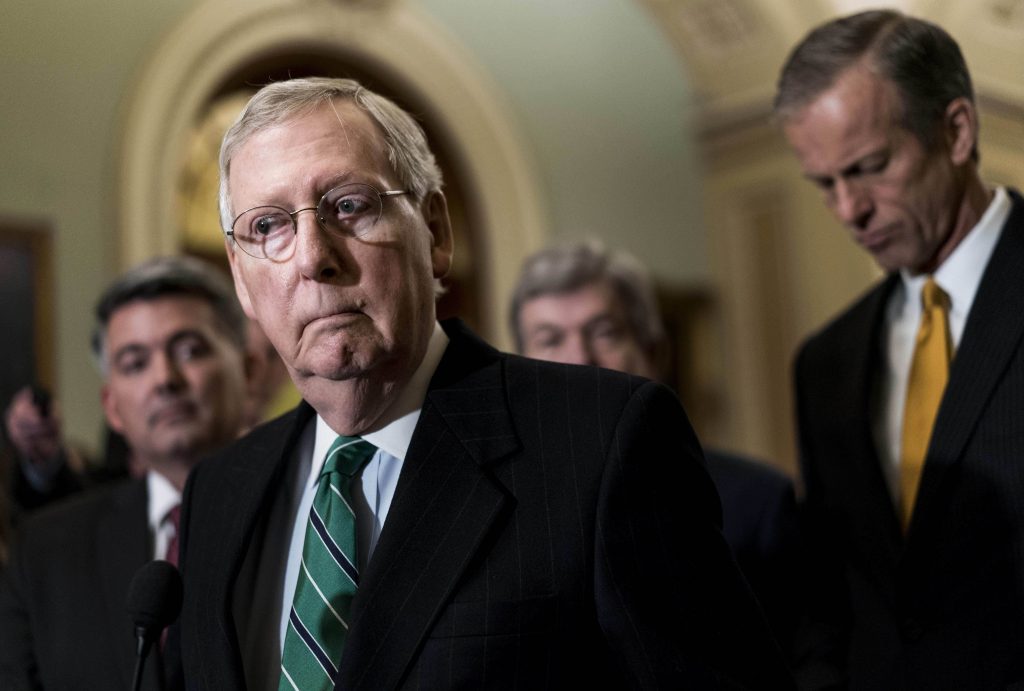 A group of Democratic Socialists and other angry protesters pursued Senate Majority Leader Mitch McConnell through a restaurant parking lot in Kentucky on Saturday, berating him with a mixture of immigration rhetoric and personal insults, and at one point, an apparent threat to visit his home.

The Louisville encounter was the second time in two weeks that McConnell’s private life has been disrupted by a spontaneous protest, and it was the latest in a weeks-long series of confrontations between powerful Republicans and those eager to harass them on camera, wherever they are found.

“If the Leader comments on being called a fascist and a supporter of ICE by a small handful of extremist protesters then I will let you know,” McConnell’s spokesman, David Popp, wrote to The Washington Post after the incident.

McConnell, who supports the Trump administration’s detention of families who illegally cross the border, but opposed the president’s short-lived policy of separating parents from their children, was having lunch Saturday at Bristol Bar & Grille, in his hometown.

As it happened, hundreds of people were protesting outside Louisville’s Immigration and Customs Enforcement Office, just a few miles from the restaurant. Among them were leaders of the local chapter of the Democratic Socialists of America, whose national fame has been growing since one of its members upset the Democratic incumbent in a New York primary last month.

So, when someone spotted McConnell at the restaurant and asked for help confronting him, the socialist group helped spread the word on social media.

And within a few minutes, just as happened after Mr. Trump’s homeland security secretary was spotted dining last month (and then Mr. Trump’s press secretary and his EPA administrator a few days after that (and McConnell and his wife, Elaine Chao, (who is also President Donald Trump’s transportation secretary) in a separate incident as they left a dinner two weeks ago), a scene was made outside the Bristol Bar & Grille.

At least half a dozen people, several with cameras, were waiting in front of the restaurant when McConnell walked out, with his checkered shirt tucked into his jeans and two dining companions at his side.

“Vote you out, vote you out!” the crowd began to chant.

“Where are the children?” one of them asked, not for the last time.

The three men didn’t stop or slow, or even look at the crowd, though someone shouted, “Go home!”

As McConnell’s party turned a corner into the parking lot, a woman with an ankle-length dress and a backpack tried to block their path. She walked a step ahead of the Senate’s top Republican, and the rest of the crowd followed close behind, still chanting and shouting.

“Where are the babies, Mitch?”

McConnell still said nothing; he simply climbed into the back seat of an SUV with a “Team Mitch” sticker on the window. The two other men (one of them a top state Republican, according to the Courier-Journal) got into the front, and the protesters could only shout at them as the engine fired up.

“No comfort for fascists!” said the turtlehead man.

“We did good, fellow citizens,” one of the group congratulated the rest as the Highlander headed toward the alley. And true enough, video of the impromptu protest would be seen by hundreds of thousands of people, and make national news, and be praised by those on the left who think Mr. Trump’s allies deserve no peaceful meals while hundreds of migrant children are still being held away from their parents.

But not everyone thought so.

As McConnell’s SUV left the parking lot, one of the videographers turned around to see a red convertible idling behind them, its driver glaring.

“Let them live their lives,” the man said as he pulled up beside the group. “It’s none of your …business.”

Now a few of the protesters stopped chanting after the departed majority leader and turned on this driver who would dare confront the confronters.

A woman behind the camera jeered. “Keep on talking, fella, you’re going to be a star.”

Like McConnell, the man in the convertible made no reply. He soon left the parking lot, too, accompanied by indistinguishable angry screams.