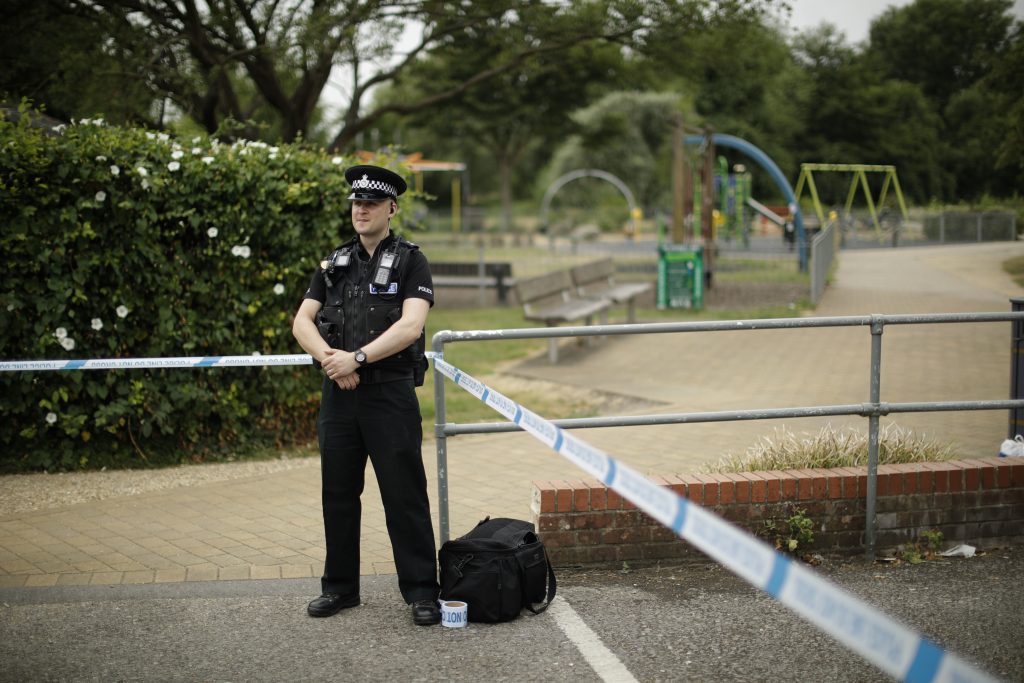 British officials investigating a second poisoning case with the nerve agent Novichok in southwest England said Thursday they suspect the victims were not directly targeted but sickened as a result of the March attack on a former Russian spy and his daughter.

Police say specialists have determined that a British couple in their 40s who visited the city of Salisbury were poisoned by the same lethal toxin — developed by the Soviet Union — that almost killed Sergei and Yulia Skripal in the same English city in March.

The new victims are now both critically ill in the same hospital that treated the Skripals. British Prime Minister Theresa May has blamed Russia for the first poisoning attack — an assertion the Kremlin denies.

The unexplained poisoning of two British citizens with no immediately apparent link to Russia has raised public health concerns in Salisbury, where a massive decontamination effort took place after the Skripals were poisoned.

Police have cordoned off a home in nearby Amesbury and other places that the latest victims visited, including a church, a pharmacy and a park in Salisbury, near where the Skripals were found.

“The working assumption would be that these are victims of either the consequence of the previous attack, or something else, but not that they were directly targeted,” security minister Ben Wallace told the BBC. “That is part of the anger I feel about the Russian state (in the Skripal case) … that they chose to use clearly a very, very toxic, highly dangerous weapon.”

Britain’s interior minister said the nerve agent was the same variety as that used against Skripal and his daughter, but it’s not clear whether the two samples came from the same batch.

“What we are clear on … is that this is the exact same nerve agent from the Novichok family,” Home Secretary Sajid Javid said. “We cannot attribute this to the same batch at this point. Scientists will be looking into that. I am also told that may not even be possible.”

Wallace said the Russian government could “put this wrong right” by providing details about the Skripal poisoning. He called on Moscow to provide information and “tell us what happened. What they did.”

“I’m waiting for the phone call from the Russian state,” he said. “The offer is there. They are the ones who could fill in all the clues to keep people safe.”

The new case has surfaced days before a NATO summit is expected to address worsening relations between Russia and the West. It also comes as Russia hosts the World Cup — a monthlong global extravaganza in which both the English and Russian soccer teams have advanced so far.

The Kremlin’s spokesman says Russia is concerned but has had nothing to do with either poisoning case.

“Russia has categorically denied and continues to categorically deny the possibility of any kind of involvement to what was happening there,” President Vladimir Putin’s spokesman, Dmitry Peskov, told reporters Thursday.

Peskov noted Britain has rejected Russia’s offer for a joint probe, adding that “the British side has not presented any evidence of Russia’s involvement in this, besides unfounded accusations.”

Police declared the case a “major incident” Wednesday, four days after a local couple — identified by friends as 44-year-old Dawn Sturgess and 45-year-old Charlie Rowley — were found collapsed at a residential building in Amesbury, eight miles (13 kilometers) from Salisbury.

“The Novichok gel that was smeared on the handle of the Skripals’ house was presumably transported in some device or syringe,” he said. “I think the working assumption now is that device or that syringe is what has appeared and the residue caused these two people to become ill.”

Andrea Sella, professor of inorganic chemistry at University College London, said Novichok nerve agents “are designed to be quite persistent — they hang around in the environment, neither evaporating or decomposing quickly.

“That means that if a container or a surface was contaminated with this material, it would remain a danger for a long time and it will be vital to trace the movements of this couple to identify where they might have come into contact with the source,” he said. “So while the public at large are at very low risk from this material, until the source is found there is a remote chance that someone else might come into contact with it.”

Initially, the investigation was led by local police, but London’s Metropolitan Police said counterterrorism detectives took charge after the substance was identified as Novichok. He said 100 officers had been assigned to the case.

Police said officers were called Saturday morning about a collapsed woman in Amesbury, then were summoned back in the evening after a man fell ill at the same property. Authorities at first thought the two had taken a contaminated batch of illegal substances.

The Skripals’ illness initially baffled doctors after they were found unconscious March 4 on a park bench in Salisbury. Scientists at the Porton Down defense laboratory concluded they had been poisoned with Novichok, a type of nerve agent developed by the Soviet Union during the Cold War.

After spending weeks in critical condition, the Skripals slowly got better. They were released from the hospital and have been taken to an undisclosed location for their protection. Doctors say they don’t know the long-term prognosis for their health.