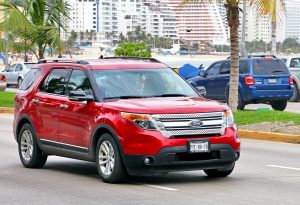 A nonprofit auto safety advocacy group is asking Ford to recall 1.35 million Explorer SUVs due to continued complaints of exhaust fumes in the passenger compartments.

The Center for Auto Safety says it found 44 complaints in a government database about fumes and potential carbon monoxide after owners had taken Explorers in for free repairs in a Ford customer service campaign that started last October.

The center made its request in a letter to Ford CEO Jim Hackett this week.

The National Highway Traffic Safety Administration has been investigating the problem for two years in police and civilian Explorers from the 2011 through 2017 model years, but it has not reached a conclusion.

Ford says Explorers are safe, owner complaints have decreased and the free service has addressed the exhaust odors. The company says anyone who isn’t satisfied with the repairs should contact their dealership “for further inspection.”

In the service, Ford said mechanics would check for leaks in the rear lift gate gaskets and drain valves. If any leaks are found, they’ll be sealed or gaskets will be replaced to prevent fumes from entering. They’ll also reprogram the air conditioning to let in more fresh air.

“The continued complaints and corresponding reports of incidents and injuries demonstrate the problem of Carbon Monoxide exposure inside Ford Explorers has not been resolved,” Jason Levine, the center’s executive director, said in a statement. Based on complaints, Levine said the problem seems to have continued into model year 2018 Explorers “suggesting that the issue apparently has not been designed out of the vehicle.”

The center also said Ford and NHTSA should do a recall “before tragedy strikes” from a driver or passenger being overcome by fumes.

Prior to October of last year, Ford had focused on fixing only law enforcement versions of the Explorer. But while maintaining the civilian versions were safe, the company said it decided to do a service campaign for them in response to customer concerns about odors and carbon monoxide.

NHTSA began its investigation of Explorers in July of 2016.

The agency said previously that tiny cracks in the exhaust manifold — a cast iron or stainless-steel tube that carries combustion gases to the exhaust — could explain why fumes are entering the cabin. But Ford has said there is no pathway for exhaust to escape from the manifold into the car.