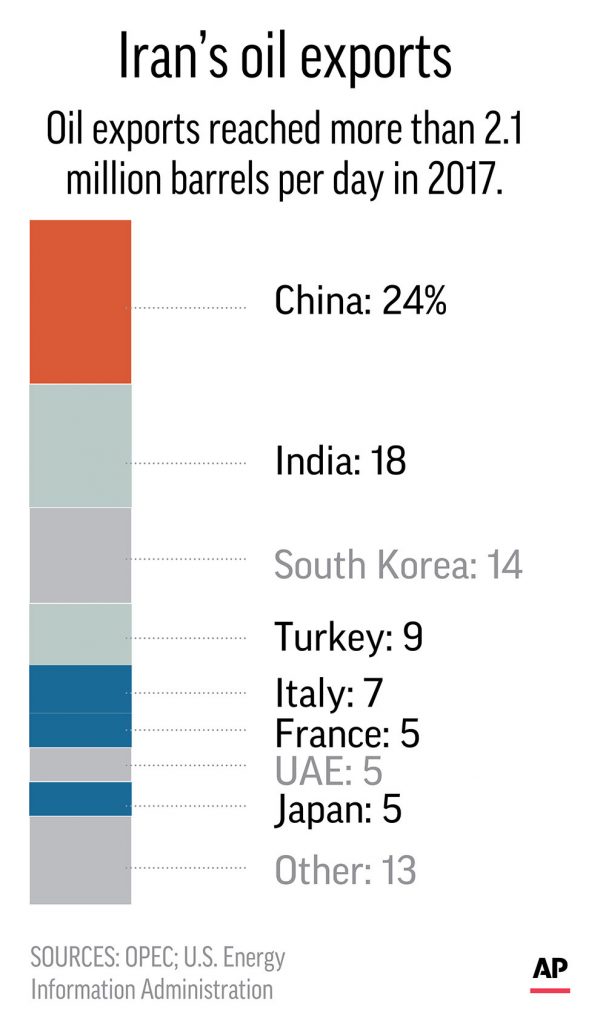 Importers of Iranian oil are facing pressure from the United States to find another energy source or be hit with sanctions.

The Trump administration is threatening other countries — including close allies such as South Korea — with the sanctions, if they don’t cut off Iranian imports by early November, essentially erecting a global blockade around the world’s sixth-biggest petroleum producer.

South Korea accounted for 14 percent of Iran’s oil exports last year, according to the U.S. Energy Department. China is the largest importer of Iranian oil with 24 percent, followed by India with 18 percent. Turkey stood at 9 percent, and Italy at 7 percent.

A State Department official told reporters this week that the “vast majority” of countries will comply with the U.S. request. A group from the State Department and the National Security Council is delivering the president’s message in Europe. The official added that the group had not yet visited China or India.

President Donald Trump announced in May that he would pull the United States out of a 2015 agreement over Iran’s nuclear program, and would re-impose sanctions on Tehran. Previously, the administration said only that other countries should make a “significant reduction” in imports of Iranian crude to avoid U.S. sanctions.

European allies will reluctantly go along to avoid sanctions on their companies that do business in the U.S., said Jim Krane, an energy and geopolitics expert at Rice University. However, China, India and Turkey might be less likely to fully cut off Iranian imports, he said.

Antoine Halff, a researcher at Columbia University and former chief oil analyst for the International Energy Agency, said it’s not unusual for the U.S. government to seek cooperation from other importers of Iranian oil — President Barack Obama’s administration did it during a previous round of sanctions.

“The difference is that there was broad international support for the sanctions then,” while the move to restore sanctions now over Iran’s nuclear program “is a unilateral decision from the United States alone,” Halff said.

The Trump administration is counting on Saudi Arabia and other OPEC members to supply enough oil to offset the lost Iranian exports and prevent oil prices from rising sharply.

The State Department official, who spoke on condition of anonymity, said the U.S. will be talking in a week or so “with our Middle Eastern partners, to ensure that the global supply of oil is not adversely affected by these sanctions.”

Members of the Organization of the Petroleum Exporting Countries agreed over the weekend to boost oil production by about 600,000 barrels a day. Iran exported about 1.9 million barrels a day during the first quarter of this year, according to OPEC figures. It is the world’s seventh largest oil exporter.

“It would not be a heavy lift for OPEC to replace Iran’s contribution to world oil markets — Saudi Arabia could probably do it on its own,” Krane said. “Saudi spare capacity protects the U.S. motorist from U.S. foreign policy.”