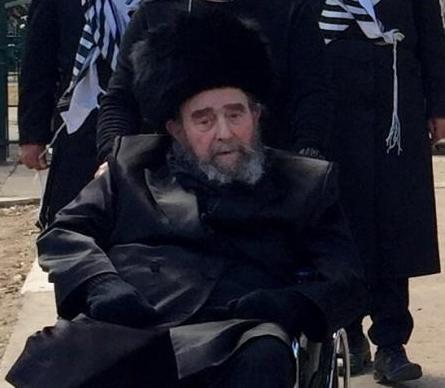 The Gerrer community across the world mourned the loss of one of the foremost and venerated Chassidim, an elder statesman and the baal tefillah in the Gerrer beis medrash on the Yamim Nora’im, Harav Hachassid Moshe Ze’ev Sheinfeld, z”l.

Reb Moshe was 95 at his petirah.

He was born in Cracow in Cheshvan 5693/1922. His father, Reb Shabsai, was a prominent Gerrer Chassid. After he was orphaned at a young age from his mother, Moshe moved in to live with his maternal grandparents, Reb Heinich Landau and family, of Cracow. Reb Heinich was a close confidant of the Imrei Emes of Ger, zy”a.

During the Holocaust years, Reb Moshe managed, b’chasdei Shamayim, to survive with many nissim. He was part of the group that schemed the daring rescue of the Belzer Rebbe, Harav Aharon, zy”a, from the claws of the Nazis, together with Hagaon Harav Michoel Ber Weissmandel, zt”l.

After the war, Reb Moshe traveled to Eretz Yisrael. When he met the Belzer Rebbe, the Rebbe was pleased to see that he too had managed to survive.

In 5707/1947, Reb Moshe married the granddaughter of the Imrei Emes, Malkah Reizel Levin, the daughter of the Rebbe’s son-in-law, Harav Yitzchak Meir Levin, Chairman of Agudas Yisrael, and Rebbetzin Mattil. The Imrei Emes took part in the wedding.

They settled in Tel Aviv, where Reb Moshe was looked up to as one of the leaders of the Gerrer community. He maintained a very close connection with the Rebbes of Ger, zy”a and shlita, and was known for his askanus without fanfare. He was a long-serving active member of the Agudah in Eretz Yisrael.

Reb Moshe served as the baal tefillah for Shacharis in the beis medrash on the Yamim Nora’im and Yamim Tovim.

In recent years, he was greatly weakened, but still managed to go to davening. Several years ago, his wife was niftar.

Although weakened, he was still present at the chuppah of his great-granddaughter on Rosh Chodesh Tammuz, reciting a brachah at the chuppah.

There was a sudden turn in his health overnight Wednesday night, and Reb Moshe was niftar on Thursday morning, adorned with his good name and many maasim tovim.

The levayeh was  held later Thursday in Tel Aviv at his home and the shtibel he davened in. The maspidim were Chief Rabbi Harav Yisroel M. Lau, Harav Zander , and Harav Mordechai Aurbach shlita. From there the levayeh proceeded to Bnei Braq to the Gerrer Kollel on Rechov Meltzer. The maspidim were Harav Yitzchok David Alter son of the Pnei Menachem zt’l, Harav Nechemia Alter son of the Gerrer Rebbe shlita, and Rabbi Yitzchok M. Tauman . The Gerrer Rebbe shlita came to Bnei Braq for the levayeh and followed the levayeh back to Tel Aviv , where the kevuruh was in chassidic section of Kiryas Shaul cemetery.