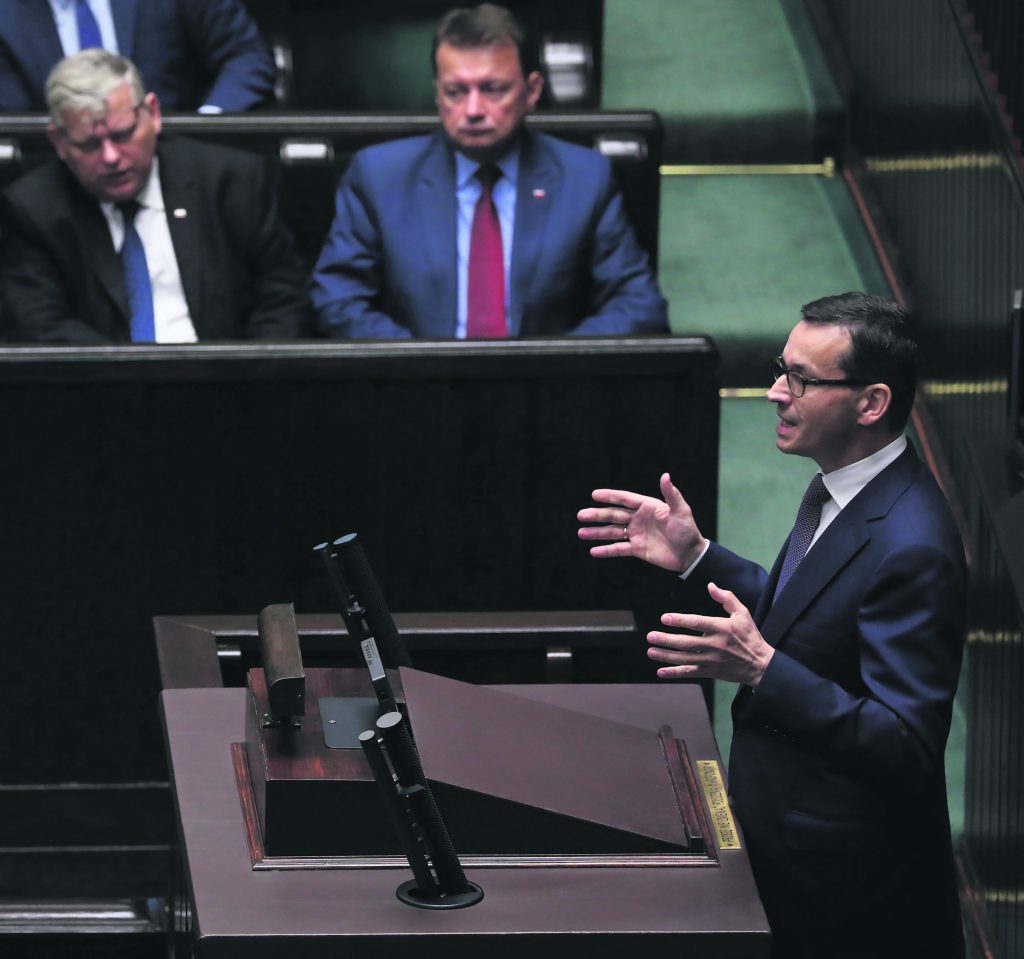 Poland’s nationalist-conservative ruling party backed away Wednesday from a controversial Holocaust speech law, with the prime minister introducing a new version of the law that would remove criminal provisions for statements deemed harmful to Poland’s good name.

A version of the law passed earlier this year called for prison terms of up to three years for falsely accusing the Polish nation of Holocaust crimes that were committed by Nazi Germany. Authorities long argued they needed to fight back against foreign media sometimes calling Auschwitz and other German death camps “Polish death camps” because they were operated on occupied Polish territory.

But the law sparked a major diplomatic crisis with Israel, where many felt it was an attempt to whitewash episodes of Polish violence against Jews during World War II. The United States warned it threatened academic freedom and that it would harm Poland’s “strategic position.”

The new draft bill was presented to parliament by Prime Minister Mateusz Morawiecki and lawmakers held an emotional debate on Wednesday morning, with members of the opposition lashing out at the Law and Justice party for ever passing the law.

The new version removes the penal provisions and is likely to allow Poland to repair its international standing and relationship with its allies. However, Law and Justice also risks losing some support from its nationalist voters. One nationalist lawmaker, Robert Winnicki, described it as caving in to Jewish interests.

Morawiecki told lawmakers in a session that was broadcast to the nation that the purpose of both the original and the amended legislation is the same, “the fight for the truth of the Second World War and post-war times.”

The legislation passed earlier this year called for prison terms of up to three years for falsely attributing the crimes of Nazi Germany to Poland. Poland’s authorities had described it as an attempt to protect the country’s reputation from what it believes is confusion about who bears responsibility for Auschwitz and other death camps Nazi Germany set up in occupied Poland during the war. They say it was modeled on anti-defamation laws in many other countries, including laws criminalizing Holocaust denial.

However, Holocaust survivors and other Jews in Israel and the United States feared that it would stifle discussion about the Holocaust and enable Poland to whitewash the role of the Poles who killed or denounced Jews during the German wartime occupation of Poland.

The law was also sent to the Constitutional Tribunal for review by the president, who said he had some doubts about it. It was never enforced in practice, and it ironically had the effect of sparking more discussion than ever before about Polish misdeeds during the war.