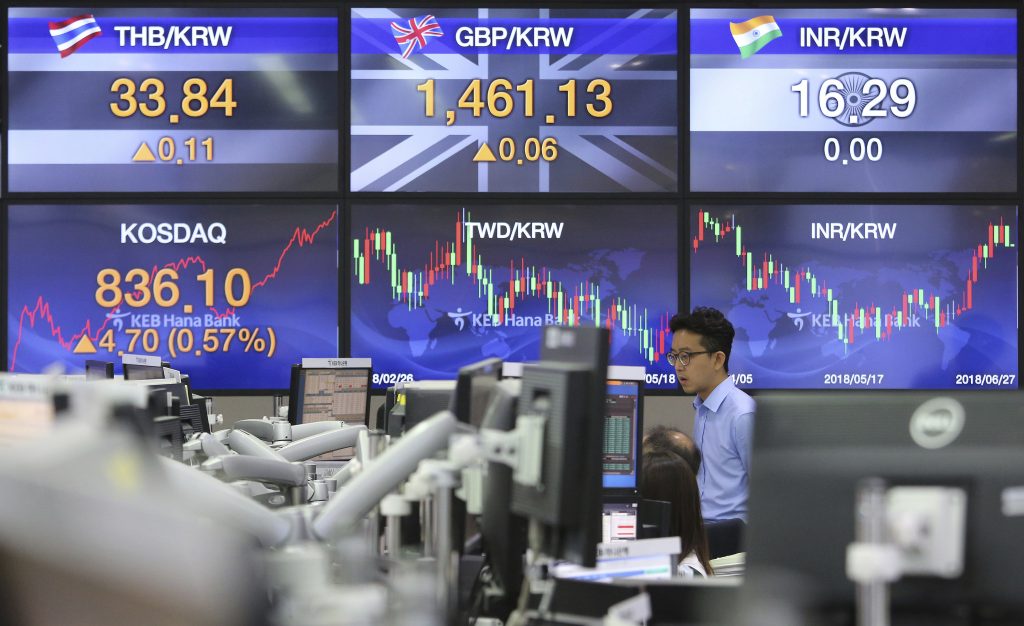 Global markets were lower on Wednesday, with Chinese stocks leading the declines as jitters over trade conflicts between the world’s largest economies lingered. Oil prices extended their gains as the U.S. pushed other countries to cut oil imports from Iran.

China’s market benchmark has tumbled into bear territory as trade tensions with Washington spook investors. The Shanghai Composite Index’s closing Tuesday was just over 20 percent below its Jan. 24 peak. The South China Morning Post newspaper in Hong Kong noted that has wiped out $1.6 trillion in stock value — bigger than Canada’s annual economic output. The biggest decliners have included telecoms and tech companies that might be hurt by U.S. President Donald Trump’s proposed restrictions on access to U.S. markets and technology. Analysts said a combination of factors such as jitters over trade conflicts, Beijing’s move to tighten liquidity and signs of growth momentum losing steam also contributed to the sell-off.

“To a large extent, the Chinese market is one driven by speculation,” said Jingyi Pan, a market strategist at IG in Singapore. “With sentiment rolling over itself of late, particularly over the escalating trade tensions that seem to have no end, it should be of little surprise to find the market crumbling.” He added that “the growth momentum presents the image of stalling in China that altogether amalgamates to an attack on investors’ confidence.”

Wendy Liu, Nomura’s head of China equity research, said some agreement on U.S.-China trade before the U.S. mid-term election was anticipated and the Chinese stock market was forecast to calm down during the summer earnings season. But for the moment, “with lack of visibility on the U.S.-China trade conflict and some renewed concerns over growth outlook, few are willing to step in and step up right away.”

Benchmark U.S. crude gained 21 cents to $70.74 per barrel in electronic trading on the New York Mercantile Exchange. The contract added 3.6 percent to finish at $70.53 a barrel in New York on Tuesday. Brent crude, used to price international oils, added 7 cents to $76.21 per barrel in London. It rose 2.1 percent to settle at $76.14 per barrel in the previous session. Trump, who withdrew the U.S. from an Iran nuclear deal in May, is pushing foreign nations to cut their oil imports from the country to zero by November, when sanctions on Iran’s energy sector will kick in again.